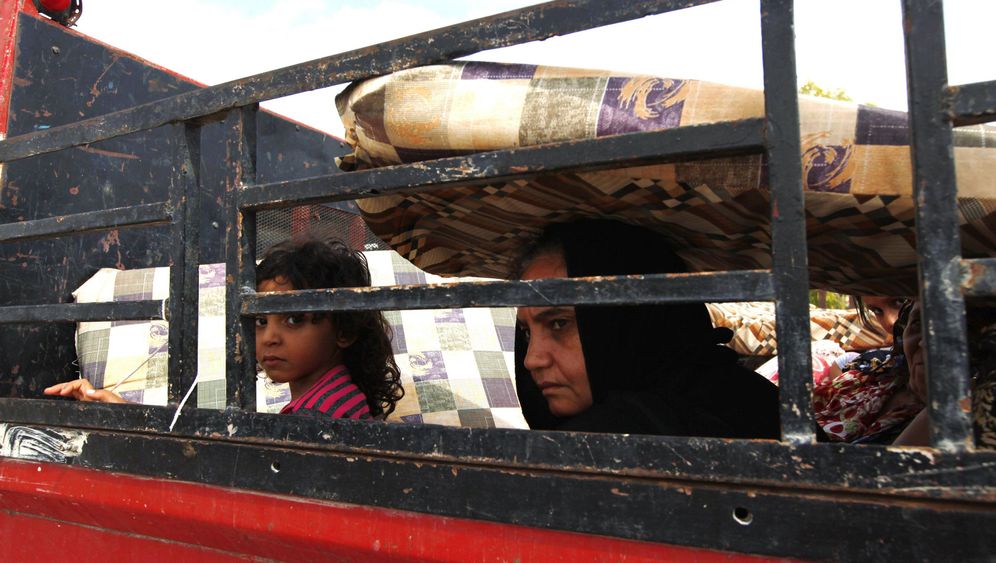 Photo Gallery: The Struggle for Sirte

The two tanks crawl up the small hill, followed by whooping teenagers dragging bazookas and assault rifles. When they have reached the top, the valley stretches out below them, a vast shimmering expanse of parched palm trees and sand. A fortress-like building surrounded by a white wall is visible on the horizon. It looks like a fort, located about three kilometers (two miles) away on the outskirts of Sirte.

The tanks turn their barrels in that direction. There are two loud noises, and the earth shakes. "Allahu akbar," the rebels shout. "God is great." Then they take cover.

The Libyan city of Sirte, located between Bani Walid and Sabha, is one of ousted dictator Moammar Gadhafi's last bastions. His son Mutassim is reportedly in charge of the resistance against the rebels there, while the dictator is believed to be hiding near Libya's border with Tunisia and Algeria, protected by paid Tuareg tribesmen.

The rebels say that they have 6,000 troops on the outskirts of Sirte. But the Gadhafi loyalists are offering fierce resistance. Snipers fire at anyone who approaches the city. Sirte is the last important symbol of the old regime, the only one it has left. After a pause in the fighting, the rebels launched a new offensive last week and allegedly captured the city's port on Tuesday. The symbol is beginning to falter. Nevertheless, no one in Libya can predict how much longer it will take until Sirte is finally captured. Will it be a few days, or even weeks?

Streams of civilians have been fleeing the city in recent days ahead of the final battle. On Saturday, the forces of the interim government announced they were calling a two-day truce to allow civilians to leave the town. According to the Geneva-based International Committee of the Red Cross, almost 10,000 people have already left.

Fears of a Bloodbath

Speaking last week, rebel leader Mohammed Ramadan Hamuda, who in his civilian life is the manager of a construction company, estimated that 30,000 civilians were trapped in the city. The 25-year-old from Misrata is now commuting back and forth between the front and his house, waiting for the orders to launch a major offensive. He is posted less than 10 kilometers from Sirte. "We can't go in there," he says. "It would be a bloodbath. We have to be patient."

Suddenly a small truck rumbles up to the checkpoint. It is coming directly from the jumble of barricades, burned-out tanks and ambulances that form the front. The truck is crammed full of cooking pots, mattresses and laundry. The driver has been trying to escape the besieged city since 5 a.m. There are nine people crowded together in the small cab: Du Mansour, a small business owner, his wife and their seven children. Gadhafi supporters repeatedly tried to prevent the family from fleeing. "Barricades made of sandbags are blocking the road everywhere in the city," says Mansour. "Armed adolescents hang out in front of the barricades and order everyone to stay in their houses. They also fire at the vehicles of people trying to flee." Mansour says that only six or seven of the roughly 100 vehicles in his convoy made it out of Sirte.

Despite the risks, many residents are desperate to escape the city, where the situation is becoming increasingly precarious. There has been no electricity or running water for 40 days, says Mansour. "There is no medicine and nothing left to eat," he adds, saying that hardly anyone dares to go outside anymore. All shops are closed, and the Gadhafi loyalists are using the mosques to store weapons.

Mohammed Dahab, 30, a Sudanese citizen, persevered in Sirte until the morning, but then he and other Sudanese fled. He has been living in Sirte, where he works as an engineer, for 25 years. His family is there with him. Many Libyans abandoned their houses long ago, he says. "The only ones left are the poor, including many African foreigners."

Dahab paid 300 dinar (around €180 or $240) for 20 liters of gasoline on the black market. He and his friends pooled their resources and then left. He doesn't believe that Gadhafi's troops will surrender. "These guys are desperate. They are just fighting to survive."

Starve or Die in the Fighting

At times, says Dahab, he wasn't sure who to fear most, the Gadhafi loyalists, the rebels or their allies from the West. One NATO air strike killed 48 civilians who were trying to help the victims of a bombing attack, he says, adding that the incident triggered resentment against the rebels and their allies.

The engineer also confirms the rumors of arrests and arbitrary executions in the city. Gadhafi supporters murdered Dahab's neighbor, he says, because he was opposed to the regime. Then they threw his father and brother in jail and blew up the family's house.

Dahab says that he was also afraid of the rebels, because the Gadhafi loyalists had claimed that the rebels were torturing people who fled from the city. "They said that they were raping the women and cutting off the men's limbs."

But then, he adds, he realized that there was nothing worse than staying in Sirte. "You have only two options there: to starve to death or die in the last battles of this war." He left Sirte, which is fast becoming a ghost town, last Tuesday.