The vast steppe stretches to the horizon, an empty patch of earth at what appears to be the end of the world, inhabited only by a handful of shepherds. Despite its remote location, drones circle in the air above this no man's land in northeastern Kazakhstan. They are part of a secret operation being conducted by the United States Defense Department, which doesn't want anyone to know what the unmanned aircraft are watching in this distant wasteland.

Pentagon officials believe there is no other location in the former Soviet republics where it is as easy for terrorists to acquire radioactive material -- and its presence there leaves them feeling deeply unsettled. As a result of earlier nuclear bomb tests, the soil in some places is so contaminated with plutonium that thieves could simply dig up enough of the material they would need to build a dirty bomb.

Occupying an area almost the size of Israel, the Semipalatinsk test site was once the Soviet Union's top nuclear testing venue. The first mushroom cloud rose into the sky over Semipalatinsk on the morning of August 29, 1949. The residents of the surrounding villages watched the spectacle in shock. No one had warned them.

Another 506 nuclear bombs were detonated there during the Cold War. After the 1963 signing of the Limited Test Ban Treaty, which banned aboveground nuclear weapons tests, the military continued to detonate bombs in underground tunnels and shafts.

As a result, Semipalatinsk was turned into one of the most radioactively contaminated areas of the world. To make matters worse, the collapse of the Soviet Union left Kazakhstan with an enormous arsenal of bombs. Since then, the United States has spent more than $600 million (€440 million) to secure plutonium and uranium in Kazakhstan, under the auspices of Cooperative Threat Reduction (CTR), a program designed to secure and ultimately destroy weapons of mass destruction throughout the former Soviet republics.

American embassy cables dating from 2009 and 2010 obtained by WikiLeaks and shared with SPIEGEL have now revealed that despite all of their efforts, US military officials still fear that terrorists could obtain radioactive material in Semipalatinsk. "Of all the projects funded by the CTR appropriation, the most critical is a classified project to secure weapons-grade material at the former Soviet nuclear weapons test site in Semipalatinsk," then-US ambassador to Kazakhstan, Richard Hoagland wrote in cables from February 2010 and January 2009.

The Americans have already made another $100 million (€73.2 million) available for the project, which includes improved surveillance of the contaminated site by Kazakh police officers and soldiers. In addition, the Americans have provided other physical security enhancements, like "warning signs, barriers, unattended ground sensors (UGS), unmanned aerial vehicles (UAVs), patrol vehicles and other equipment required for Kazakhstan," according to another US embassy cable from the Kazakh capital Astana a short time earlier.

Originally, the Kazakh government planned to return the 18,500-square-kilometer (7,140-square-mile) region to its original use as pasture and farmland. Teams were sent to the Polygon, as the Soviets referred to the site, to measure radiation levels.

"The only remaining concerns lie with dispersed 'hotspots' within the test site," Nicholas Priest, the director of NATO's SEMIRAD mission, said in 2005. "At present, the location of these 'hotspots' is not completely understood, and this is a worry."

As part of Operation Groundhog, Russian, American and Kazakh teams are jointly searching for sites with high plutonium levels. In one location, the radioactive poison was so highly concentrated that workers sealed off the ground with two meters (6.5 feet) of reinforced concrete. For a long time, anyone could walk across the parched grass to reach the areas where nuclear bombs had once been detonated. "Access to the site is uncontrolled and utilized by shepherds and their herds," a US Energy Department team warned in 2001.

Cancer rates are high among residents of the villages and cities in the test region. Plutonium, a heavy metal, emits alpha radiation, and the material is most harmful when inhaled or ingested. Scientists found very high levels in horse bones, where plutonium had become concentrated. Kazakh shepherds use these bones to make soup.

But the highest plutonium concentrations are most likely underground. Roughly 400 nuclear bombs exploded in shafts and tunnels up to two kilometers (1.25 miles) deep. Years ago, Larissa Ptizkaya, the director of the local radiation protection institute, reported that people trying to steal scrap metal had used homemade bombs to blast open the nuclear test caves, which had been sealed with concrete. The thieves, in order to feed their families, sold the irradiated metal to dealers in China. Of course, terrorists could acquire radioactive material for dirty bombs in the same manner.

Although a 2009 embassy cable indicates that there was "successful elimination" of 181 tunnels, there could be more. The cable also mentions 20 other tunnels that were being investigated at the time.

The careful surveillance of the Kazakh steppe is nothing new for the US military. In the 1950s, US Air Force pilots flew reconnaissance missions in U-2 spy planes over the Soviets' nuclear program in Semipalatinsk. 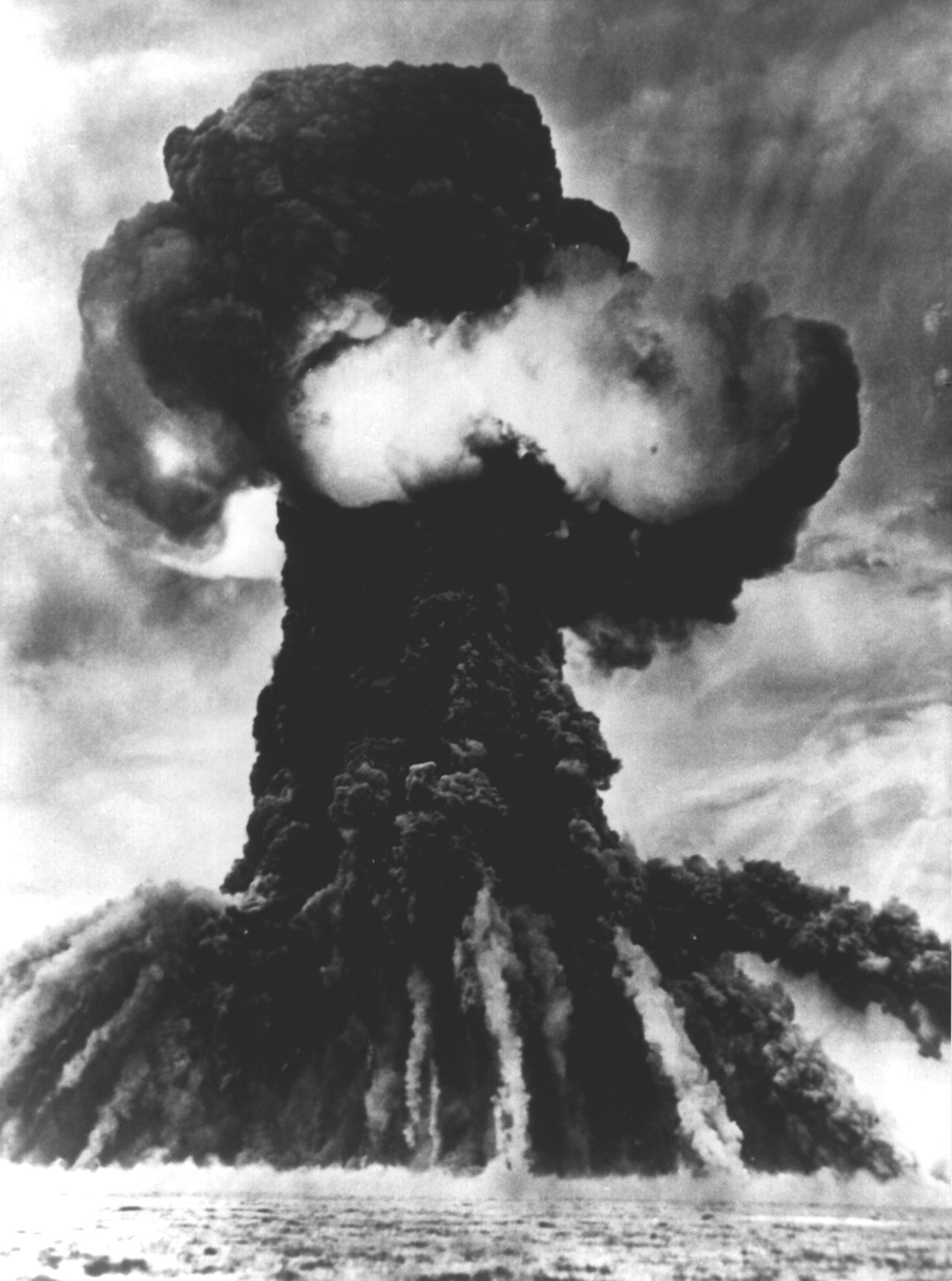 A mushroom cloud at the Semipalatinsk nuclear test site in 1949. Local residents received no advance warning of the blast.