The NATO foreign ministers gathered in Berlin for a summit earlier this month may have worn diplomatic smiles on their faces, but the expressions seemed quite artificial -- and their ostentatious display of unity came off more like a masquerade than reality.

The truth is that the alliance is currently experiencing a lack of solidarity on a scale that has been rare in its history. Every country in the alliance appears to be pursuing its own national agenda, with few showing much willingness to compromise with their other partners. To name but a few examples:

Obama is erraneously hoping that the NATO intervention can succeed without US leadership. The US president could lead -- both politically and militarily -- but he doesn't want to. Among the Europeans, it is Sarkozy who would most like to lead the mission, but he is incapable of doing so -- French munitions are already in short supply. And German Foreign Minister Guido Westerwelle is still insistent that no German soldier should set foot on Libyan soil, but in the next breath he says that Germany will provide military protection to humanitarian transports to Libya.

Otherwise, leaders in Berlin are crossing their fingers that the murderous Libyan despot, out of remorse, will voluntarily exit the stage into self-imposed exile.

With such deep differences of opinion, it is currently impossible for NATO to develop a common strategy on how to proceed in the face of the present impasse in Libya. With air strikes alone, NATO will be unable to topple Gadhafi, but the current UN mandate doesn't even cover the necessary use of ground troops. Without obtaining arms from abroad, the rebels will also be incapable of gaining the upper hand. And even if they do manage to obtain weapons, it remains an open question whether or not they can prevail.

One thing the NATO foreign ministers were able to agree on at their Berlin summit was that Gadhafi's war against his own people -- and, thus, the NATO intervention -- will last longer than originally anticipated.

There are deeper reasons behind NATO's inability to agree on a common policy for the Libya intervention. The current problems are tied to profound strategy deficits within the alliance.

During the Cold War, the undisputed raison d'etre of the alliance was the US-led joint defense against a Soviet attack on the territory of a NATO member state -- anchored in the famous Article 5 of the NATO charter, which stipulates that an attack on Europe or North America would be considered an attack against all and obligates the other members to come to its aid. Germany, especially, benefitted from the protection offered by Article 5. With the implosion of the Soviet Union in 1991, though, NATO lost its enemy and the original reason for its inception.

Since then, numerous task forces and innumerable NATO summits have experimented with new strategy proposals. At the same time, though, the international security situation has been in a constant state of flux and has changed in revolutionary ways. NATO had a strong historical -- and praiseworthy -- role to play in the transformation process of the former Warsaw Pact member states, culminating in 2005 with the accession of the Eastern European countries to NATO. But by the time of the Russian-Georgia conflict in 2008, at the very latest, NATO's enlargement euphoria had dissipated.

Today, the 28 NATO member states have profoundly different opinions about what the alliance's future course should be, a fact that even the new NATO strategy plan adopted at a summit in Riga in November was unable to conceal. It contains little by way of answers to some of the most pressing questions:

Opinions among the member states diverge greatly on each of these questions. And the member states are currently unable to agree to a common NATO strategy on any of these issues that is politically palatable for each country. Indeed, NATO today lacks the kind of supreme strategic objective that united all NATO partners up until the collapse of the Soviet Union in 1991.

And as long as there is no solidarity or political will among all the member states to establish a substantial new strategy that goes beyond painless closing statements at summits that pay diplomatic lip service but add little in terms of content, NATO's ability to act militarily will remain compromised. And the more it loses its ability to act collectively, the more we will see individual NATO member states seeking out "coalitions of the willing," if those alignments better serve their own strategic interests. The result is the loss of one of NATO's key assets, the integration of the security policies of its 28 member states.

In the face of this lack of will on the part of the Europeans, the United States' readiness to rapidly and constantly support the pursuit of European interests out of solidarity to the alliance will also diminish, as is currently illustrated in the case of Libya. The consequence of this is that NATO may transform into a forum for nonbinding trans-Atlantic political discourse. With solidarity fading away within the military alliance, the Europeans would be relegated to ensuring their security on their own in the future.

That is a scenario that surely cannot be in Germany's interests if it wants to pursue a serious, credible and responsible security policy. However, Germany's present self-isolation leaves the international community with the fatal impression that Germany, the former main beneficiary of NATO, is no longer available to shape a NATO strategy for the future. And why isn't it? Because of ignorant, nationalist-pacifist provincialism. 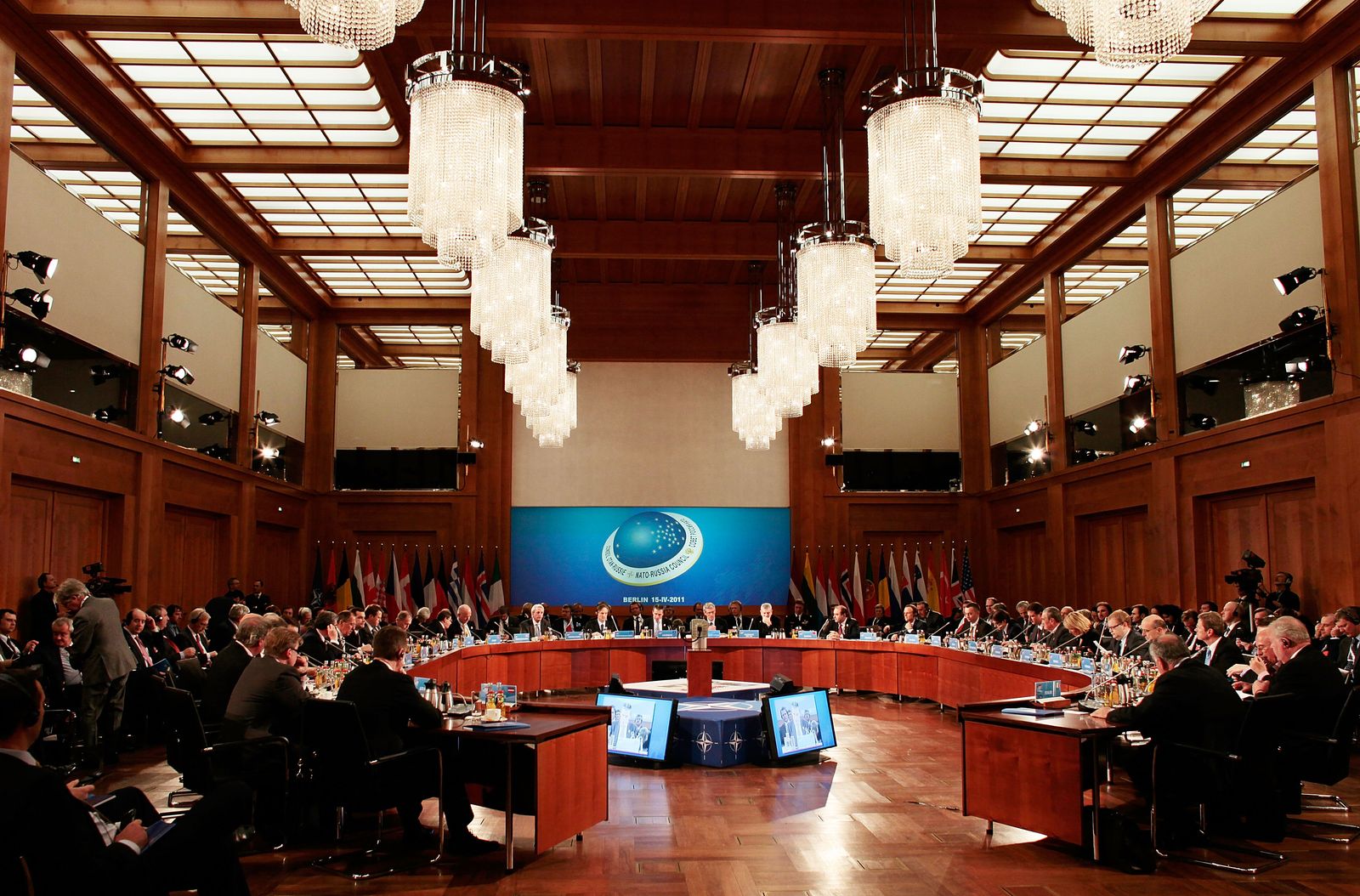 The NATO foreign minister conference in Berlin on April 15: The alliance has seldom in its history seen the lack of unity it is currently experiencing.