When it came down to the crunch, Chancellor Angela Merkel and Foreign Minister Guido Westerwelle decided that Germany should side with China and Russia. Together, the three members of the United Nations Security Council abstained from Thursday's vote on a resolution to impose a no-fly zone on Libya. It is a curious political development, to say the least.

The trio makes for strange bedfellows. There is Germany, a democracy which puts great store in the rule of law and human rights, siding with a communist, one-party dictatorship and a country with a dubious track record on political freedoms. On the other side are Germany's traditional allies -- the United States, France and Britain -- not to mention parts of the Arab and African world. Lebanon had been one of the countries presenting the resolution, which was backed by the Arab League. Qatar and the United Arab Emirates have already said they would take part in a military operation, according to UN diplomats.

And despite the Libyan regime's move on Friday afternoon to declare a cease-fire -- at least for now -- and inviting international observers into the country, Berlin's move could have lasting repercussions. Although Berlin has not blocked military action by abstaining, the German government has marginalized itself. It is effectively telling its allies: You will have to deal with this one alone -- we're not going to help you.

The German position, which had been agreed between Merkel and Westerwelle, had been clear for days. As a concession to its allies, Berlin will now beef up its mission in Afghanistan. There is talk of Germany taking part in AWACS surveillance flights over the country, which would take pressure off Germany's allies and free up their aircraft for operations over Libya. But is it enough?

Some politicians within Merkel's center-right coalition are already warning that Germany could be drifting even further away from France, Britain and the US. Attitudes toward Germany will change as a result of the vote, says Ruprecht Polenz, a member of parliament for Merkel's conservatives who heads up the Bundestag's Foreign Affairs Committee. "I don't think we've heard the last word on this," he said, pointing out that the European Union had already announced its support for the resolution. Germany will also participate in a discussion about the resolution within the EU and NATO, Polenz said.

It's clear that Westerwelle enjoys playing the role of Germany's pacifist-in-chief. Speaking in his office in Berlin on Friday morning, he justified his skepticism about a military intervention yet again. The German government sees "significant dangers and risks," he said, meaning that it could not support the whole resolution.

Westerwelle has been striking exactly that tone for weeks now. At first, his stance earned him praise, even from the opposition. But now, given the risk that Libyan rebels could be massacred by Gadhafi's troops if they do not receive military help, Westerwelle's position seems oddly out of touch with reality. Merkel and Westerwelle apparently hope that the German "nein" will go down well with the electorate. That may well be the case. But within NATO, Berlin's abstention is likely to be perceived as showing a lack of solidarity with Germany's allies.

Indeed, it seems as if the Merkel-Westerwelle duo have become trapped by their own position.

When the insurgency against Gadhafi broke out, Westerwelle promptly stated his support for the repressed opposition. Earlier, he had initially been cautious before making any pronouncements about Tunisia and Egypt, but in the case of Libya, he quickly called out Gadhafi as a dictator, and argued in favor of EU-level sanctions against the regime in Tripoli.

But when Gadhafi proved hard to topple, and his troops began a counter-offensive, retaking one city after another, Westerwelle didn't prove any more flexible in his stance. Over time, his skepticism about a no-fly zone grew into a firm "no." And as Britain and France lobbied for military action, a resurgent Gadhafi praised Germany's position. That fact alone should have been deeply embarrassing for Berlin.

By then, at the very latest, Westerwelle and Merkel ought to have shifted their positions. Besides, by that point, the Arab states had already said that they would actively participate in a no-fly zone -- one of the main pre-conditions Westerwelle himself had stipulated for any UN mandate.

Nevertheless, Merkel and Westerwelle stuck to their positions. In recent days, Westerwelle even intensified the tenor of his rhetoric -- but his target was not Gadhafi but, indirectly, London and Paris. Washington, for its part, had long remained undecided. Speaking on Friday morning, Westerwelle also reiterated a statement he has oft repeated in recent days: "German soldiers will not participate in a military mission in Libya."

It's exactly the kind of sentence that former German Chancellor Gerhard Schröder of the center-left Social Democratic Party (SPD) might have used. During the last Iraq war, he adopted early on the position that Germany would not participate -- right in the middle of a national election campaign in 2002.

Westerwelle surely had similar considerations on his mind. After all, there is considerable skepticism regarding overseas military operations among the German population, and particularly amid the members of the upper-middle class that tend to vote for his business-friendly Free Democratic Party. At the beginning of the year, Westerwelle's position as FDP leader looked shaky amid internal opposition. But he managed to stabilize his situation after the FDP's decent performance in elections in the city-state of Hamburg. Now the FDP faces elections this weekend in the eastern state of Saxony-Anhalt. A week later, pivotal votes will take place in Baden-Württemberg and Rhineland-Palatinate in western Germany that could have implications for Merkel's and Westerwelle's coalition government.

Now Westerwelle is taking his cue from Schröder -- and he clearly thinks this is a recipe for domestic political success. But Schröder was better positioned in 2002, and he also had the French on his side within the UN Security Council. This time around, though, France opposes Westerwelle's position, and that is a very crucial difference. The Berlin-Paris axis, which is also very important for the EU, has been damaged by the split.

Germany now faces a heated domestic political debate over the government's course: Even the opposition parties are divided in their views of Thursday's abstention.

Until now, it has always been standard practice for Germany to support the most common position possible in the international community when it comes to crises, Rolf Mützenich, the foreign policy spokesman for the SPD, told the German news agency DPA. "That's why it was a mistake that Foreign Minister Guido Westerwelle categorically ruled out the threat of a no-fly zone. By doing so, he unnecessarily tied our hands and our ability to negotiate."

SPD leader Sigmar Gabriel and Green Party co-floor leader Jürgen Trittin, on the other hand, initially supported the government's position. "I can understand the skepticism, and for that reason the abstention was the right move," Gabriel said on Friday. Military action against Gadhafi, he warned, also held the danger of escalating the situation. Anyone who goes into a country also needs to know when the intervention can come to an end, he added, noting that Germany's experience in Afghanistan had showed how difficult that can be to determine.

Trittin described the tighter sanctions imposed in the UN resolution as overdue. "We need to really shut off Gadhafi's oil tap," he said. Still, the Greens remain skeptical about a military intervention, he said. 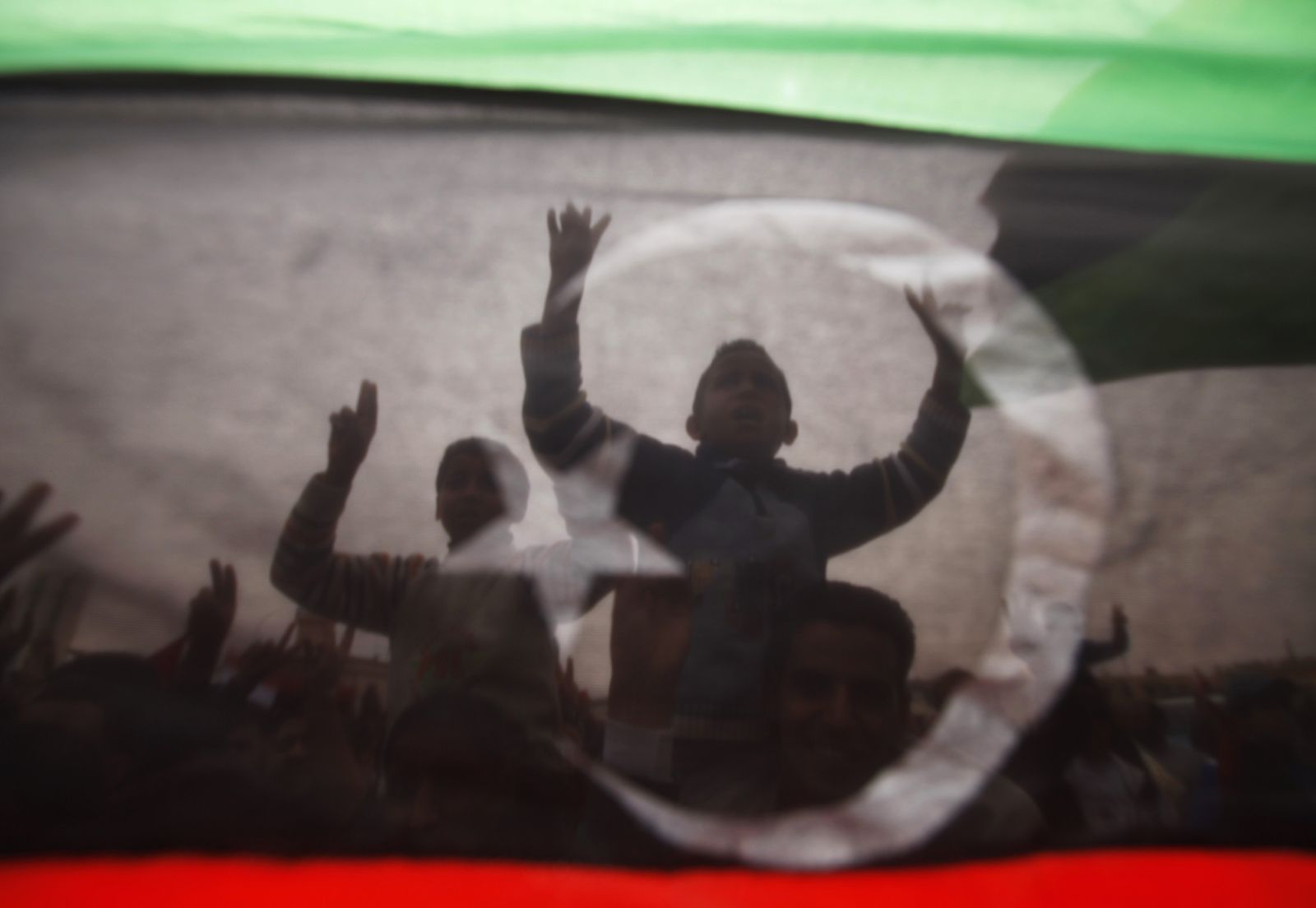 Protesters are seen through a Kingdom of Libya flag during celebrations in Tobruk following the UN resolution.