US President George W. Bush is an optimist. That's why he's visiting the Middle East this week in order to speed up the peace process that he started in Annapolis at the end of 2007.

He wants to use the 12 months left to him in the White House to solve the 60-year-old Middle East conflict, he says, and he gushes bravely about a two-state solution -- with Israel and Palestine living in harmony, side by side. 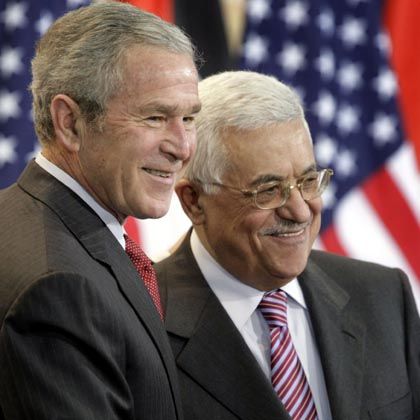 But during his visit, which ends Friday, he has achieved exactly the opposite. Instead of bridging the divide between the Israelis and the Palestinians, he has made it wider. Neither has he accelerated the peace process. Instead, he has merely managed to make it more difficult. On the red carpet that was laid out for him in the Holy Land, he has managed to bury the Palestinian state before it was even born.

Take, for example, what Bush said at a joint press conference with President Mahmoud Abbas in Ramallah on Thursday: The US president promised the Palestinians their own state within a year. He said he was convinced that a peace accord would be signed before the end of his term in January 2009.

Speaking at Abbas' side, Bush said that he was confident that "with proper help, the state of Palestine will emerge." Sources close to the negotiations said that Bush had offered to visit the region again if this was required to give the peace process fresh impetus. And the White House also announced on Thursday that Bush had named Lt. Gen. William Fraser as his envoy to monitor the Israeli-Palestinian "road map" peace plan.

But Bush has expectations that cannot be fulfilled in the madness of the Middle East; in fact, they just come across as naïve. He appears to assume that some kind of inner compulsion to find a harmonious solution to conflicts must exist -- a view that is not supported by history.

But the Bush visit has shown once again with painful clarity how intractable the conflict really is. The antagonisms are too complex. Simply managing the conflict with any degree of efficiency must count by itself as a success.

But even that will be difficult as long as the Palestinian territories remain divided. President Mahmoud Abbas lost the Gaza Strip this summer and now only controls the West Bank. Gaza is like another planet where he has hardly any influence. Abbas, always a weak leader, is now impotent. Even within his own Fatah party, the number of those loyal to him has shrunk and the population has little respect for him. Without the support of the Israeli military, it is likely that Hamas could also have overthrown Fatah and Abbas in the West Bank.

By pointing out Abbas' shortcomings in public, Bush has made him even weaker. There were admittedly friendly words when Abbas received Bush in Ramallah on Thursday. In order to avoid offending Bush, Abbas even eschewed the Russian fur hat he usually wears when it is cold.

But Abbas is not in a position to fulfill the great expectations that Bush has placed on his shoulders. Since the summer putsch by Hamas in the Gaza Strip when Abbas lost much of his power, the radical Islamists have been steadily building and securing their power in Gaza. All the important functions -- from the police chief through the teachers and up to the most senior judges -- are now occupied by Hamas. For Abbas, this means there can be no return to Gaza. The division of the Palestinian territories in two is irreversible.

A helpless Abbas has demanded that Hamas undo the coup, saying that only then is he prepared to talk with them. But he knows better than anyone that he shouldn't hold his breath waiting for Hamas to give up power.

Even as Abbas rhapsodizes about peace, Qassam rockets are being fired towards southern Israel from the Hamas-controlled Gaza Strip every day. Everyone knows that Abbas has little power to change that, even if he wants to. But that doesn't stop Bush from holding him accountable. So long as Gaza remains a refuge for terrorists, he says, it will be difficult to conceive of any serious peace talks. "As to the rockets, my first question is going to be to President Abbas, 'what do you intend to do about them?'" Bush said this week, responding to a journalist's question.

And Bush's advice to his host Abbas -- that he should present the people of Gaza with a vision -- was practically grotesque. Then, he argued, they would make the "right" choice -- in other words, choose Abbas over chaos. But did Bush really think free elections in a radical Islamist dictatorship would be a realistic possibility? And not even Bush can know how Abbas is supposed to make visions reality in a swath of land in which he is powerless and is neither capable nor willing to fight for his ideas.

Even if Abbas were to seek active dialogue with Hamas in an attempt to convince those in power and the populace of the correctness of his policies, Bush (and Olmert) would be the first to shout "treason" and remind him that he shouldn't be talking with an organization that is listed as a terrorist group.

What most Palestinians already feared was confirmed during Bush's visit: That the US president is expecting greater concessions from them than from Israel, and that they shouldn't expect the American president to propose any even-handed solutions. Even the demand that the Israeli government clear settlements on the West Bank seemed almost sheepish, as though Bush was trying to avoid making waves.

Pierre Heumann is the Middle East correspondent for the Swiss weekly Weltwoche.