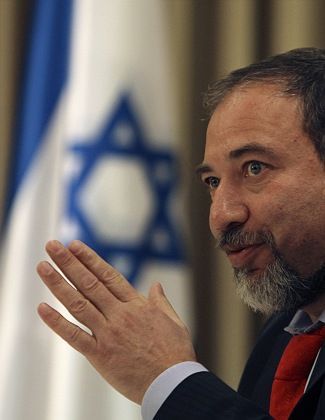 Dear Mr. Minister, I would like to take this occasion to welcome you once again to Berlin, and take my word for it: It is more than just an obligation of politeness to receive you here. You are the highest ranking diplomat of a country that is a friend of ours, and more than that: a country that, for historical reasons, will always be linked to us through a special relationship, and whose right to exist is our raison d'état.

Since we are now in my office following the official reception -- and since there is no one here who could relate what I would like to convey to you here and, neither consciously nor unconsciously, take it out of context and blow it up into a crisis in our relations -- allow me to clearly say: I think your political views are catastrophic, your warmongering outbursts are an affront, and the way you treat the Palestinians is untenable.

The manner in which you and your prime minister, Benjamin Netanyahu, are currently taking positions will not remain without consequences. You have said that you no longer feel bound to the peace process that your previous government endorsed in Annapolis with the United States and the Arab states in 2007. Europe -- as well as the US under President Barack Obama -- will hold Israel (at least partially) accountable should the situation in the Middle East escalate.

In the matter of Iran's bid to acquire nuclear weapons, you will achieve the opposite of what you are aiming for: No one will be prepared to even consider tougher sanctions against Iran unless you commit yourself to a two-state solution with your Palestinian neighbors, unless you finally accept and implement a halt to the construction of settlements in the occupied territories, as demanded by the United Nations, the US and the European Union. You cannot seriously expect to use the UN and insist, right down to the last detail, on the enforcement of all sanctions that have been imposed on Tehran and, at the same time, unscrupulously ignore all UN resolutions on your settlement policies. In the Arab world, this is called "Israeli two-facedness" and, although I persistently stand in your defense against broad, sweeping generalizations -- particularly from this camp -- I have to say: I share the Arab position on this point.

My dear Mr. Lieberman, I see the indignation in your eyes. You have a reputation as a very engaging and charming man. But I know that you occasionally tend to insinuate that your critics harbor disingenuous motives, and you believe that they seek to personally vilify you. That is not my intention. Some would maliciously say that your past as a market hawker in the former Soviet Union, and as a bouncer at Israeli nightclubs, is not exactly the best qualification for your high office, and that the extent of your corruptibility is exemplified by the fact that law enforcement officials have already been investigating you for years on corruption allegations.

I'm in no position to judge your difficulties with the justice system; I have faith in the Israeli constitutional state in this matter (although I have to say that I was flabbergasted at how quickly Israel shrugged off the obvious misconduct of its military in the war against Gaza and "fully exonerated" the suspects, to quote the Neue Zürcher Zeitung, a newspaper which is known for its balanced reporting). I also must admit that I greatly admire your life accomplishments -- you went back to school and earned a degree in political science from the Hebrew University of Jerusalem. The best politicians are not always the smart-looking ones who have strived for nothing other than a position within the party. My German predecessor in office, a former taxi driver, also boasts a comparably unconventional career. In my opinion, a politician's quality is reflected solely by what he has learned from his life, how open he has remained or become in his thinking, and how tolerantly he behaves -- and it is here in particular that I have my problems with you and your positions.

"You Demand They Take an Oath to the Jewish State"

We are not talking about sins of youth. Over the past few years, you have seized virtually every conceivable opportunity for provocations -- and played with fire in the process. Back in 2002, when you were already a member of the government, you seriously proposed bombing Egypt's Aswan Dam if Egypt didn't stick to its peace agreement with Israel. In 2003, when then-Prime Minister Ariel Sharon decided to release 350 Palestinian prisoners, you made the unfathomable comment: "It would be better to drown these prisoners in the Dead Sea." And so on: In 2006, you advocated that Arab Knesset members who held talks with Hamas or Hezbollah be treated like "Nazi collaborators" and executed.

During the Gaza conflict in 2008, you said that your democratic homeland Israel should model itself after autocratic Russia and flatten that Palestinian strip of land, regardless of the civilian casualties. The key tenet of your political platform is the vision of a purely Jewish state of Israel. You are calling for all Israeli Arabs -- over a million people, or 20 percent of the population -- to relinquish their passports and be "transferred" to the West Bank or Jordan -- and should any Arabs be allowed to remain, you demand that they take an oath of allegiance to the Jewish state.

I am sorry, but much of what you are planning is reminiscent of South Africa's apartheid. Your world view, Mr. Lieberman, has been called "fascist" and "racist" by the respected Israeli newspaper Haaretz -- and with good reason, I'm afraid.

Racists are generally not welcome in Berlin; and I have always avoided fanatics. I am receiving you because I still hope that there will be a learning effect -- because there are experts in your country, and in mine, who say that we will see by your political actions that we should not take your verbal slip-ups and statements so seriously. And yet just recently you again spoke of "preparations for war" and said that under no circumstances would you speak with the Syrians about the return of the annexed Golan Heights -- as if there were much else to talk about?

Why Is Israel a Problem for Peace Rather than a Solution?

What is wrong with Israel? How can it be that an ultra-nationalist party like your Israel Beitenu (Israel my home) has become the third largest political force, and that a large proportion of the population can't even begin to imagine the suffering of the Palestinian civil population? Where does this flagging sense of compassion, this cynicism, this inability to make peace come from? Especially now that -- thanks to a new, proactive American president -- the cards are being reshuffled in the Middle East and new opportunities are emerging? Why is Israel becoming a problem for the peace process -- instead of its solution?

I know that many of my European counterparts are just as dismayed about your comments as I am, that shaking hands with you is a concession, a gesture of goodwill that doesn't come easily. Allow me to add by the way that I also tend to take politicians by their word, and I do this with you as well. This is exactly what you and your friends always demand that we do with Iranian President Mahmoud Ahmadinejad and his irresponsible threats.

And now let's speak plainly, the kind of political straight talk that German Chancellor Angela Merkel avoided during her speech to the Knesset in March, 2008, where she, inexplicably -- and, in my opinion, out of a wrongly understood sense of consideration -- failed to even once criticize the Israeli settlement policy, which has been strongly condemned by the entire EU. The only chance that you have of (perhaps) preventing Iran from becoming a nuclear power is to broker a "grand bargain" -- an overall settlement for the entire region. This would entail Israel making painful concessions, like concluding a peace agreement with Syria and giving back the Golan Heights. Israel would also need to grant the Palestinians their own state within viable borders -- and the Palestinians will hopefully internally agree on a moderate course. Believe me, we in the West are speaking behind closed doors just as energetically with the Arab side as with you. And Israel, with few exceptions, would have to withdraw all settlements (including perhaps your West Bank community of Nokdim, where you have chosen to live).

Should you actually diverge from this land-for-peace course, which was agreed in Annapolis, and refuse to budge on the settlement issue, we will work within the EU, using Germany's voice, to take measures against Israel. This process could also eventually lead to sanctions. And you should know that if Israel is planning to launch a military strike against Iranian nuclear facilities -- and you are reportedly one of those who advocate such madness -- you will not only have the Islamic world but also all of Europe against you

And don't delude yourself, either: Even your best and most powerful friend, the US, won't back you up. Public opinion is changing there. Even the pro-Israeli lobby is increasingly coming to the realization that a totally uncompromising attitude, as has until recently been propagated by you and Prime Minister Netanyahu, would pose a greater long-term threat to the existence of Israel than a comprehensive compromise.

I don't know if Syria's President Bashar Assad is prepared to make peace. I have no idea if it is possible to strike a deal with the Iranian hardliners. Like you, Tehran's years of playing cat and mouse on the nuclear issue give me cause for skepticism. But I cannot imagine that you would one day want to say to your children: 'We didn't try everything.'

And now, my esteemed colleague, let us exit my office and tell them what they expect to hear: That we enjoyed getting to know each other, that we had a positive conversation, and that we are optimistic about the future of the Middle East."