If you follow the reasoning of the United Nation's World Food Program, then Kenya is a unique region when it comes to hunger catastrophes. In this east African country, a popular vacation destination with 32 million inhabitants, UN workers hand out more food on an annual basis than they do in southern Sudan, which civil wars have ravaged for decades. But is Kenya really dying of hunger?

If that were the case, Africa's prospects of ever being able to feed itself would look really dismal. Take a look at a map and you'll see that Kenya lies on Lake Victoria. The lake got its name from its British "discoverer," John Hanning Speke, who named it after the British queen at the time. It's really much more like an ocean than a lake, despite a constantly sinking water level. This inland sea connects Tanzania and Uganda with Kenya. Covering an area of 68,000 square kilometers (26,250 square miles), it's Africa's largest lake. And it is full of freshwater.

For Kenya, the question -- which also applies, incidentally, to Malawi, about which there are regular reports about hunger emergencies -- is really this: Can you starve if you live right next to such a gigantic freshwater reservoir?

Sure, Kenya is large. It has savannahs, highlands, arid lands in the north, mountains and sultry regions, such as the 480-kilometer (300-mile) east coast on the Indian Ocean or the Kakamega rainforest in the west, which is a virtual greenhouse. If you got things only halfway right in such a country, it seems that nobody should go hungry -- and especially if it is getting assistance from the philanthropists of the world community.

Whatever surplus is produced in the western part of this blessed country only needs to be to be delivered to the north and sold. That would give the farmers more incentive to produce more. And producing more means earning more, which in turn also means that more tax money would pour into the government's coffers and could be used to make improvements to the country's disastrous infrastructure.

What is going on in Africa ?

Of course, Kenya would be far from thrilled to take the money it brings in and put it into improvements in the road network. It was just recently that Kenya's minister of finance, Amos Kimunya, announced that it was urgent for him to reduce infrastructure spending because otherwise he wouldn't be able to pay the government cabinet. Kenya currently has 94 ministers and assistant ministers, each of whom earns more than $20,000 (€12,940) a month on top of having their own state-funded compound. As a result, Kenya's budget now has a huge deficit of nearly $300 million, and it will soon have to announce to the international community that the world's rich countries need to foot the bill. If they don't, the Kenyans will starve and the peace that was so painfully won -- primarily by creating this enormous cabinet -- will be in imperiled. 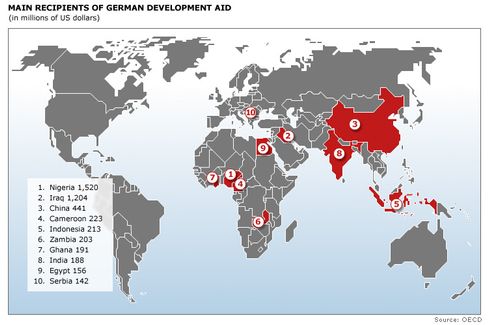 The roads are in horrid disrepair, and they'll stay that way for a while. As a result, it would take days or even weeks to get the corn from the west to the northern parts of the country. But why would they need it there anyway? There's a shortage in the north because the World Food Program is usually there to hand out food for free. The UN's employees are paid to fight hunger, and that's why they usually write reports in which they dramatically portray the situation in Africa and which they usually end with appeals demanding more donated food.

These developmental aid workers, whose reports largely shape our image of Africa, behave this way to a certain extent out of an instinct for self-preservation that they believe the Africans don't have. Without help, they say, all the Africans will starve. And, indeed, without aid, all the helpers would also be out of a job.

And what happens when the help comes? First the merchants complain because the cost of food drops through the floor. Nor is it worth it, under the status quo, to build up any surplus stocks. Then, the farmers complain because their crops become worthless. The people who cozy up with the aid workers are the ones following better advice. You can get everything for free there and you don't even have to lift a finger.

Developing Food and Trade Isn't Worth It

The aid workers are drawn to the arid lands, where the poor live and the help is urgently needed. Under normal circumstances, such areas don't contain many starving people because they are thinly populated. In the Sahara, for example, hunger emergencies are comparatively insignificant. But in northern Kenya, and particularly in the region's bordering desert land, such as the Sahel, they happen all the time.

And that's why the aid workers dig wells there to provide the inhabitants with clean drinking water. Soon enough, there's a downright crush around the well. Then, more and more cattle drivers and more and more nomadic shepherds bring their wards to the well. And these herds -- and especially the goats -- eat everything up. And, there, where you used to have someone coming by only rarely, a dusty little village shoots up, and then a little city. And, now, more and more aid workers are necessary to feed all the people who settle around the well and the feeding stations. Pretty soon, nothing can happen without aid. The area becomes hopelessly over-populated, and there is no way out of the dilemma in sight.

A Planned Economy -- without a Plan

Development aid is a planned economy, even if it doesn't have a plan. The belief that food shortages can be overcome in a planned economy is one that has already proved disastrously wrong in the former Soviet Union, North Korea and Cuba. One has to feel sorry for the Africans for their continued role as human guinea pigs.

Oscar Wilde once quipped that "Philanthropic people lose all sense of humanity." It looks like he has been once again proven correct.

But one could now argue that the Africans have themselves to blame. They didn't have to accept the aid. But that's an insidious argument. The majority of African countries are bitterly poor. For example, even Mexico's GDP is up to 50 times larger than that of oil-rich Sudan. And, of course, hardly any African is going to turn down any of the so generously offered donations. In the end, they put the money towards building football stadiums or beautiful boulevards that the military can parade down to celebrate the anniversaries of their seizure of power . And you can use it for limousines and to take trips to UN conferences, where you can mull over the world's hunger problems with other heads of state.

The main reason that there is starvation in Africa is that there are no profits to be made in cultivating or trading foodstuffs. Either developmental aid ruins the profits or corrupt leaders rob their people blind. There's hardly a country in Africa where private ownership rights are enforced; everything belongs to either the clan or the state.

And in the places in Africa where commercial agriculture has functioned -- such as in Zimbabwe, South Africa and Namibia -- the spread of white settlers has ruined it. Ironically enough, the land reforms in Namibia, a former German colony, were even financed with the money of Germany's taxpayers. And it won't be long before these countries are also on life support paid for by the rest of the world.

It's a fairy tale that hunger is simply just part of life in Africa. The lion's share of Africa is sparsely populated, and many countries enjoy a climate in which anything can thrive. There was even a long period when people believed that the biggest hunger problems would surface at some point in the densely populated Asian countries, such as China and India. In the meantime, however, those countries are now even producing surpluses. And the same holds true in the very densely populated countries of Europe, where there are often massive surpluses despite the fact that only around 3 percent of the population is involved in agriculture.

Where there is hunger, it results from unethical leaders who steal from their people and let them either starve or rush them into wars. Ethiopia's former socialist leader Mengistu Haile Mariam did this, as did Robert Mugabe, his counterpart in Zimbabwe, whose protection Mariam would go on to enjoy while in exile. And this is also the case these days in Sudan, Chad or among the neolithic communists in Eritrea. But the rest of the continent would benefit much more if people would put a little faith in Africa's power to heal itself instead of constantly bumping up the dose of harmful medicine.

A series of African intellectuals is currently calling on people to finally just let Africa be and stop treating its inhabitants as if they were suicidal. Trade, they say, is a much better solution to the problem than aid is. They also say that property and land need to be privatized and that subsidizing dictators needs to come to an end. They see the cure in the opposite of development aid. It would be a very valuable effort.