The folder labeled "climate change" that George W. Bush left behind for his successor on the desk of the Oval Office in January likely wasn't a thick one. Although Bush once said that America is overly dependent on oil, he never got beyond that insight. He was too busy waging war on Iraq and searching for a legal basis for extraordinary renditions to pay much attention to the real threat facing humanity. "Forget the climate" seems to have been Bush's unofficial motto.

But few people expected that Barack Obama, of all people, would continue his predecessor's climate change plan. When he took office at the beginning of 2009, it was clear that the success of the UN Climate Change Summit in Copenhagen in December depended almost entirely on the US -- that America needed to take a clear leadership role on a problem that could shake civilization to its very core. 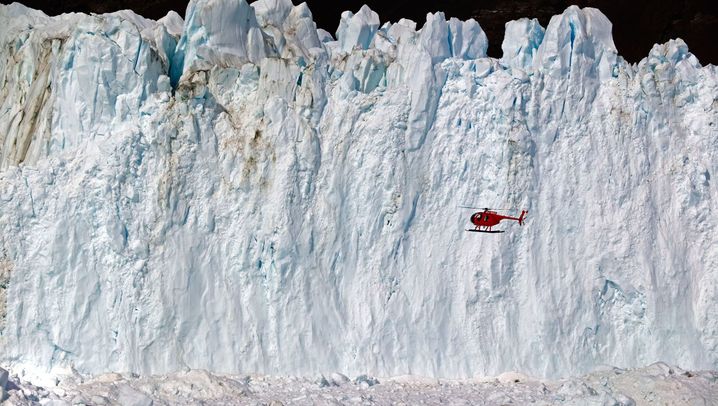 Only if the US manages to reduce its excessive energy consumption, commit itself to mandatory CO2 emission reduction targets and help finance poorer countries' move away from oil is there still a chance that countries like China and India will do the same and that a dangerous warming of the Earth can be stopped. On the weekend, Obama announced that there would be no agreement on binding rules in Copenhagen. It was the admission of a massive failing -- and the prelude to a truly dramatic phase of international climate policy.

Obama Lied to the Europeans

Barack Obama cast himself as a "citizen of the world" when he delivered his well-received campaign speech in Berlin in the summer of 2008. But the US president has now betrayed this claim. In his Berlin speech, he was dishonest with Europe. Since then, Obama has neglected the single most important issue for an American president who likes to imagine himself as a world citizen, namely, his country's addiction to fossil fuels and the risks of unchecked climate change. Health-care reform and other domestic issues were more important to him than global environmental threats. He was either unwilling or unable to convince skeptics in his own ranks and potential defectors from the ranks of the Republicans to support him, for example, by promising alternative investments as a compensation for states with large coal reserves.

Obama's announcement at the APEC summit that it was no longer possible to secure a binding treaty in Copenhagen is the result of his own negligence. China, India and other emerging economies have always spoken openly about the fact that the US, as the world's largest emitter of CO2, has to be proactive in commiting itself to targets agreed on by way of international negotiation. But that is not America's style. The US is quite happy to see itself as the leader of the Western world. But when it comes to climate change, America has once again failed miserably -- for the umpteenth time.

If the rest of the world were to follow the US example in their approach to fossil fuels, the oceans would not only heat up, but would probably soon begin to boil. American per capita CO2 emissions are about twice as high as those in comparable industrialized nations and many times greater than those of the developing world. The climate change bill that is currently making its way through Congress does not go nearly far enough -- and that is Obama's fault. The bill proposed reducing CO2 emissions by a ridiculous 4 percent relative to 1990 levels, by 2020. Climate researchers believe that reductions of 40 percent or more are required.

The bill has since been watered-down even more -- by exactly the kind of lobbying interests that the new US president had promised to overcome. Obama has neglected to communicate the importance of climate change to his fellow citizens by speaking about it in a major speech or in his much-loved "town hall" meetings. And he has left it to the Europeans to take the lead.

Americans Do Not Look Beyond Their Own Borders

Obama's priorities are wrong. Copenhagen is not just any old summit -- it is the long-awaited climax of many years of negotiations, negotiations whose failure was only averted at the last minute at the Bali summit two years ago. Industry and energy companies around the world will use the results of the Copenhagen summit as a benchmark when planning their investments for the coming years and decades.

Obama was quite happy to make the trip to Copenhagen in October to support his hometown Chicago's bid to host the Olympic Games. But he is currently leaving open the question of whether he will come to the Danish capital in December for the UN Climate Change Conference. In doing so, he has given other world leaders the signal that they do not need to attend. If the Copenhagen summit, which energy strategists and environmentalists have been preparing for two years, is a failure, then it will mainly be Obama's fault.

Admittedly, the Europeans have been slow to make concrete pledges of the billions of euros that are needed to help developing countries combat climate change, but at least they are prepared to make significant CO2 reductions of up to 30 percent, relative to 1990 levels, by 2020. The US, however, is dragging its feet, preferring tactics to strategy -- just as was the case under George W. Bush.

Dreamt Up by Hollywood

For most Americans, the world beyond the US's borders is nothing more than an irritating nuisance. For this reason, arguments based on appeals about drowning Bangladeshis, starving Africans and flooded islands in Indonesia have little effect. In Hollywood, the United States has an industry that continually pushes the materialistic ideal of Western prosperity to billions of people around the world, while at the same time bombarding them with apocalyptic visions in the form of disaster movies.

Many Americans clearly also believe that real climate change is just something dreamt up by the entertainment industry.

Obama has proven himself to be unable to put an end to the lies that modern American society is based on. He is unable to overcome the entrenched lobbyists of the oil and coal industries and make the reality clear to his compatriots: They are the worst energy wasters on the planet -- and are thus, indirectly, a major threat to world peace in the 21st century. Although they do not enjoy a higher quality of life than Europeans, Americans consume twice as much fossil fuel per capita. Their cars are too big, their homes are not energy-efficient, and they have yet to focus their talents for innovation away from trivial entertainment gadgets and toward renewable energy-technologies.

It may seem arrogant to take the Americans to task to such a degree. But at least in Europe, many are willing to question their own lifestyle and to look at events beyond their own borders.

The Copenhagen summit, which is just three weeks away, is not lost yet. But if the worst-case scenario becomes reality at Copenhagen and at the follow-up conferences -- if, in other words, world leaders ignore the findings of the global scientific community -- then the US will find itself in a very uncomfortable position. America will be seen as the primary culprit of global warming -- and this after the US, with its rampant real estate speculation, has given us a global economic crisis that has not only destroyed assets, but pushed 100 million people worldwide into hunger. With that kind of track record, the US hardly has a claim any more to the leadership of the Western world -- let alone a Nobel Peace Prize for its leader.

A world of flooded coasts, dried-up rivers and disappearing rainforests will lead to massive refugee movements and conflict. The Nobel Committee should postpone the award ceremony for the Nobel Peace Prize from Dec. 10 to Dec. 20. Only if Obama has achieved a convincing deal at the Copenhagen conference will there be a real reason to honor him. 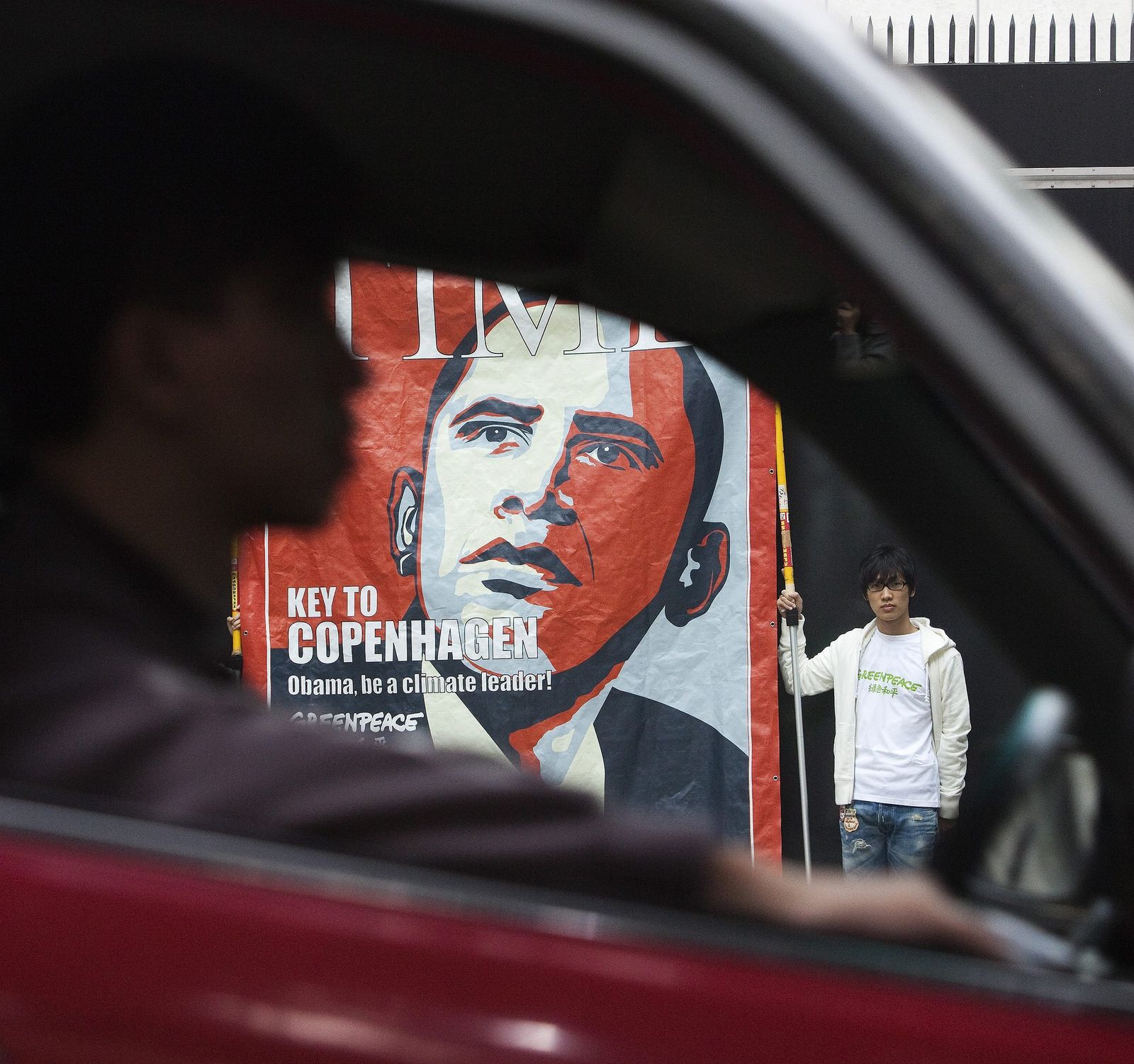