Most Germans would like to see their country's military forces, the Bundeswehr, withdraw from Afghanistan -- and quickly. One could dismiss this as wishful thinking. Yet, with just three weeks to go to the German national election, the political parties have to take into account the mood in the country. There is a growing feeling of reservation in Germany about the mission, with many people asking: What are we actually doing over there?

This question has actually been central to German politics since January 2002, when German soldiers first deployed to Kabul. The historical reasons are well known: Germans in uniform don't exactly have a very good reputation internationally. But by the 1980s, Germans had become used to wearing casual clothes, working 35 hours a week and lounging on their IKEA sofas at the weekend. They finally seemed nice again and could bear to look themselves in the mirror.

Then, after the unexpected fall of the Berlin Wall, Germany's Western allies soon began demanding that the Krauts dust off their uniforms once again. Yet Germany hadn't even been prepared for the fall of the Wall, never mind foreign missions by the Bundeswehr.

When it came to demands for military assistance, the new Germany's NATO partners were not to be fobbed off with references to the darkest chapter of the 20th century. During the Balkan wars in the 1990s, they argued that Germany's total defeat in World War II did not mean that the British military airfield at Brize Norton and the American military cemetery in Arlington, Virginia should be the only places receiving coffins and body bags. In a world that had radically changed since the collapse of the Soviet Union, loyalty to the alliance did not consist of nice speeches but of a willingness to fight. The fact that the first German soldiers to be sent on a military mission abroad were deployed by a governing coalition that included both the center-left Social Democrats and the pacifist Green party was, therefore, one of the most remarkable decisions in German political history.

But this new doctrine of an allied, armed German foreign policy has obviously never been internalized, neither by the German people nor by their politicians. To do so would have been regarded as inherently dubious in the light of the cataclysm wrought by the Nazis during World War II. So in order to justify Germany's foreign missions, things were either massively exaggerated, like during the Kosovo war when it seemed as if the Holocaust had to be used to justify the intervention against the Serb forces. Or else the military scenarios were played down -- politicians managed to "sneak it past people," as Jürgen Trittin, the foreign policy spokesperson for the Greens, put it during a Bundestag debate on Tuesday. Of course Trittin neglected to say that he had belonged to the government of former Chancellor Gerhard Schröder when this plan was hatched. All the present grand coalition of the SPD and CDU under Chancellor Angela Merkel has done is extend that policy.

The current situation in Afghanistan is complicated and the conflict-ridden history of the region is far from encouraging. Every foreign army that has tried to push into the mountains of Afghanistan has been smashed to pieces; anyone who tries to justify the current mission has a hard time finding any positive examples. Opium production continues, the recent presidential elections were anything but fair and transparent and the fight against the Taliban is claiming an increasing number of civilian lives.

It is little wonder, therefore, that it took Chancellor Angela Merkel years to finally dare be photographed with German soldiers in Afghanistan rather than simply giving her blessing from her desk in Berlin to a mission approved by her predecessor. The fact that it took an air strike on oil tankers that had been seized by the Taliban and the ensuing critical debate to force Merkel to make a government statement on the issue speaks volumes. It wasn't exactly an example of political courage.

In contrast to this head-in-the-sand approach, Oskar Lafontaine, one of the leaders of the left-wing Left Party, has been able to say clearly and unambiguously: "We are the only party against the war in Afghanistan!" These kinds of statements are helping him ride a wave of success, with his party increasing its share of the vote in recent state elections in Germany. It all sounds good: one man with one clear message.

Of course the reality is far more complicated than Lafontaine's seemingly pacifist stance, particularly as "peace" would certainly not be established in Afghanistan after the withdrawal of Western troops. Instead, the country would face a return of the Taliban to Kabul and most likely the collapse of the state structures in neighboring Pakistan, a country with nuclear weapons, which seems to be joined at the hip with Afghanistan's militant Islamists. Nevertheless, the full force of Lafontaine's statement can now be felt after the disastrous air strike. Anyone who wants to counter him will have to stand back and take a deep breath. And who has the time to do so in the midst of an election campaign?

The Word 'Exit' Hovers in the Air

That was why on Tuesday, despite all the pledges to the NATO alliance and international responsibility that could be heard in the Bundestag, the unspoken word "exit" hovered in the air. The desire to finally hand over military and civilian responsibility to the Afghan government is growing day by day, and not just in Germany. In the US, columnists like Thomas L. Friedman are discussing the beginning of the withdrawal while public support for the mission is eroding significantly. And President Barack Obama will have to take this slowly shifting mood into account when he decides on the exact number of extra troops to send to Afghanistan. In other words, it is likely that General Stanley McChrystal, a cautious man not given to hot-headed action, will not get what he needs to beat the Taliban -- but will only get as many troops as the White House thinks is politically opportune. It remains to be seen if that will suffice.

The discussion about whether German foreign policy should include military action as part of the NATO alliance has, therefore, been postponed. The forthcoming German election will not decide the issue of a possible withdrawal of German troops but it could still have an influence on it. The issue is certainly being used to mobilize voters. It is clear that Lafontaine and the Left Party will never consider a compromise on this issue. The price they would demand for ever entering a coalition at the federal level with the Social Democrats and Greens would be the immediate withdrawal of German troops from Afghanistan -- and thus the de facto rejection of the country's NATO obligations.

That is not up for debate on Sept. 27 when Germans go to the polls, as the SPD has categorically rejected entering into government on the national level with the Left Party. But who knows how the SPD and Greens will position themselves during the next legislative period? Lafontaine's demands could in fact distort the architecture of Germany's foreign policy much faster than now seems possible.

Things in Afghanistan are not going to get any better during the coming parliament -- that much is clear. And the reality is in all likelihood far worse: President Hamid Karzai cannot build a state with stoned or badly trained Afghan soldiers who shoot in the air instead of aiming at the enemy, or corrupt officials, who demand baksheesh rather than taxes. Many are now wondering if building a state is even what the Afghan president actually wants.

A quick military success, including a political deal with the so-called "moderate Taliban," is not in sight -- quite the opposite. Independent experts and think tanks are assuming that the war in Afghanistan will drag on for years, if not decades -- if one takes the stated war aims seriously. There is no sign of the so-called moderate Taliban, though that idea seemed to bewitch Washington earlier this year. Those members of the Taliban who have the greatest military and political strength are not moderate and do not want to cut a deal. They want power back and they will use any means at their disposal to get it.

Fight Against the Taliban Has Only Just Begun

It is therefore high time that the government in Berlin stops just looking at the mood in the country and starts reacting to the various serious scenarios, not just behind closed doors but loudly and clearly in public. The time of building girls schools and roads is long past. In the light of the depressing circumstances, just maintaining the amorphous power relations in Afghanistan as they are now, might be considered an achievement during the next few years. A withdrawal would certainly bring them all crashing down.

And following a military and political defeat -- and that is exactly what a withdrawal at this point would mean -- the issue of Afghanistan would soon be back on the agenda in Europe and in the US. Except that in the future soldiers, heading to the conflict zone in Afghanistan and the sub-continent would probably also have to pack in their kitbags, not just flak jackets, but NBC suits to protect themselves against radioactive, biological and chemical weapons.

Does this paint too gloomy a picture? The truth is, the fight against the Taliban only began in earnest this spring following years of allowing the militant Islamists to run things in the provinces. The US Army has been taking a stand in areas that it never controlled before and has been met with fierce resistance. It is actually supposed to be assisting the Afghan army in many places, but instead it is bearing the main brunt of attacks and has suffered a correspondingly high number of killed and wounded soldiers. That is something that one would like to have heard in the German parliament on Tuesday. Instead the chancellor announced a new international conference with the aim of handing over power to Karzai.

That must have really impressed the Taliban. No doubt they are all now rushing in panic out of Afghanistan and across the border into Pakistan. 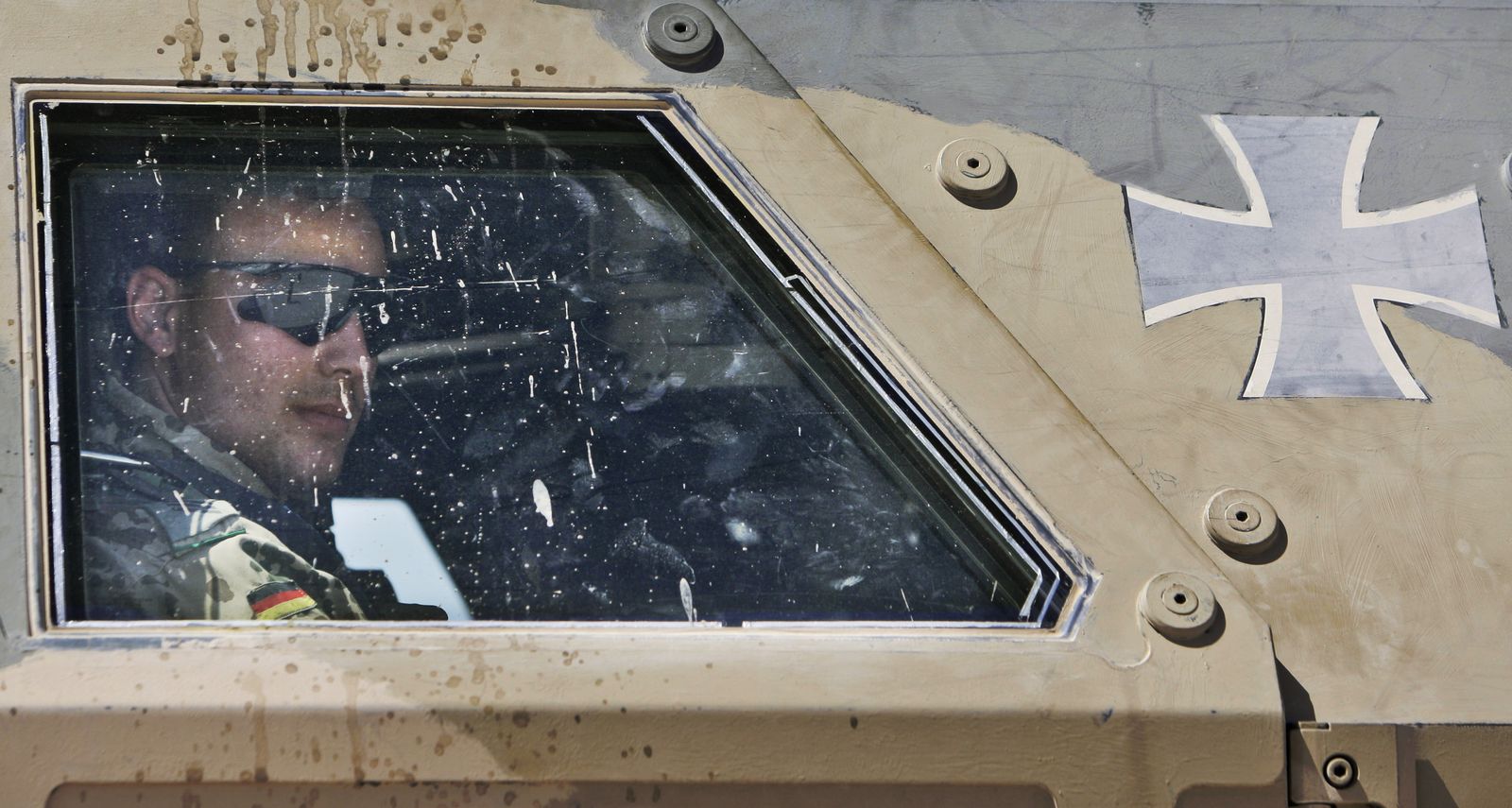 A German ISAF soldier looks out of an armored vehicle as he leaves for Afghanistan.