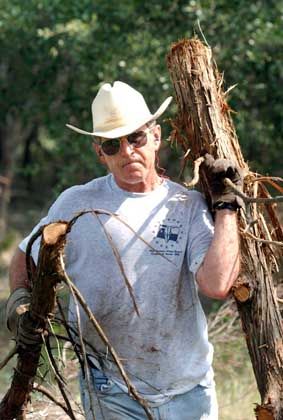 Many Americans had no idea until today that their government and those of the other Group of Eight (G-8) countries were locked in a bitter battle over global warming. The US media has studiously avoided the issue. The New York Times has ignored it for weeks, the Washington Post covered it with one short article and USA Today contented itself with a wire report from the Associated Press. Meanwhile the television networks have apparently decided to run absolutely nothing on the issue.

These reactions already say a lot about the intention behind Bush's climate change "proposal" from Thursday. Bush wants to take the high ground in the news cycle back home before he heads to next week's G-8 summit in Germany and ends up looking like a global warming black sheep again.

White House spokesman Tony Snow even admitted as much. At a press briefing, a reporter asked whether Bush would appear to be a "rejectionist" by torpedoing a G-8 call for limits on greenhouse gases. " No, I think the president looks like a leader," replied Snow.

And making Bush look like a leader was exactly the point of his appearance on Thursday in Washington's Ronald Regan Building, where he spoke on a stage in front of a blue background plastered with the slogan: "US Global Leadership Campaign." As it happens, this was actually the slogan of a private initiative backing greater US engagement abroad, but it made the perfect setting for the president.

It was a long and boring speech on development aid, poverty and debt relief in the Third World. Bush came to the topic of global warming only towards the end. "The United States takes this issue seriously," he assured his audience before announcing his new proposal. "By the end of next year, America and other nations will set a long-term global goal for reducing greenhouse gases. To help develop this goal, the United States will convene a series of meetings of nations that produce most greenhouse gas emissions, including nations with rapidly growing economies like India and China."

For his domestic audience with little knowledge of German Chancellor Angela Merkel's climate proposals and the bickering between the G-8 states about them, it all sounded as if Bush had suddenly morphed into a bold environmental champion, out to save the world from global warming.

The president acted as if he was the one prepared to take the initiative at the summit at the German Baltic Sea resort of Heiligendamm next week. "The United States is taking the lead, and that's the message I'm going to take to the G-8," he said. The message from Bush was clear: Washington isn't going to let the Europeans set the agenda on global warming.

The White House makes no secret of the political motivations for the new initiative. Jim Connaughton, Bush's point man for environmental issues, was trotted out to play spin doctor to quiet the press corps. Calling it the White House's "going forward strategy," Connaughton said the Bush administration was "trying to create a new conversation" on global warming. Or perhaps Washington is simply trying to turn the current conversation on its head?

It's a clever PR move. Back home in America, Bush can present himself as the decisive leader he so yearns to be, giving the voters the impression that he has launched an offensive in the climate change debate -- a debate that has long since moved on however, even here in the US. And in Europe the plan is intended to take the wind from the sails of G-8 critics -- if they attack his proposal, they will now be the ones that risk being labeled as "rejectionist."

Upon closer inspection, Bush's initiative does indeed appear to be something from the dusty past of the global discussion on climate change. According to the president, the 15 nations producing the most greenhouse gases would meet at several conferences -- under US leadership -- to set a global goal for reducing CO2 emissions by the end of 2008, namely just before the end of Bush's second term in office. So, in other words, the president will pass the climate change problem, just like the mess in Iraq, onto his successor.

Admittedly, it was the first time that Bush has ever openly discussed setting emission targets. But he remained vague about hard figures. US Energy Secretary Samuel Bodman recently made clear to Internet magazine Grist why: "There is a concern within this administration ... that the imposition of a carbon cap in this country may lead to the transfer of jobs and industry abroad to a country that does not have such a carbon cap. ... You would have the US economy damaged."

Connaughton also refused to be drawn on the question by reporters on Thursday. Instead of calling targets "binding" or "voluntary," he referred to "long-term aspirational" goals.

The Bush administration's laissez-faire approach to global warming was appropriately formulated in a Wall Street Journal op-ed piece by the president's former chairman of the US Council of Economic Advisors, Glenn Hubbard: "If you smell smoke at home, it would be silly to do nothing until you actually see flames, but you also should not hose down the house after one whiff of what might be smoke."

And the G-8 summit at Heiligendamm? Connaughton admitted there was "some disagreement over a few issues" with Merkel, but he also called Bush's proposal "in line with the thinking" of the chancellor, who currently holds both the G-8 and EU rotating presidencies. But then again, Bush can't put too much stock in Merkel's ideas, since he rejects her main summit goals of introducing CO2 limits and emissions trading.

Instead, the Bush administration is clinging to its old mantra that global warming is best combated with energy-efficient technology and sustainable forestry and agriculture. The energy crisis -- which the average American regards these days purely through the prism of high gasoline prices -- can be solved by market forces, according to Connaughton. "There's no silver bullet to the energy security equation, just like there's no silver bullet to the climate change equation," he said.

The fact that few new ideas can be expected from Bush became clear as early as his State of the Union speech in January -- the first time he publicly recognized the climate crisis. While mentioning it as an aside to rising gasoline prices, he said America was "addicted to oil." But critics complain that no deeds have since followed those words.

Bush is a laggard even within his own country. Broad sections of the US business community and Wall Street have voluntarily committed themselves to fighting global warming. The nation's high-tech elites in Silicon Valley are onboard, as are the media and Hollywood's activist stars. Most US states have also recognized the problem, while church leaders like preacher Rick Warren have likewise embraced the issue. The US Supreme Court has even criticized the White House for dragging its feet on climate change.

Despite it all, the Bush administration continues to grapple with arguments long since abandoned elsewhere around the world. How far the US government still has to go was made clear by an interview on National Public Radio by the head of NASA, Michael Griffin, only hours before Bush's speech on Thursday, where he regurgitated the administration's tired old position on climate change.

"I'm aware that global warming exists," he said. "I am not sure that it is fair to say that it is a problem we must wrestle with."