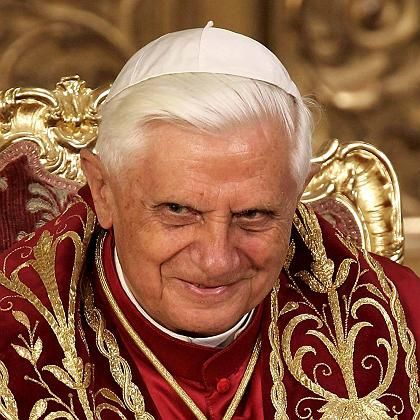 Germans adored "their" pope until now.

What has the pope got in common with troubled German mortgage lender Hypo Real Estate? Both managed to destroy enormous virtual capital in a matter of days. Both have triggered a loss of confidence whose impact cannot yet be estimated.

As far as the Vatican is concerned, its statement on Wednesday has drawn a line under the affair of Bishop Williamson, the Borat of schismatic ultra-reactionaries. That's another similarity with the Hypo executives. The question is when the next confidence-boosting measure will be necessary.

Pope Benedict XVI was never an anti-Semite, although he may feel a secret empathy for the traditionalists and their loyalty to the old mass (pre Vatican II), these rigid figures who operate in the purest spheres of Catholicism. Of course, the scandal is evidence of the Curia's inability to communicate. Its gesture of reconciliation with the Society of Pius X should have been attached to a rejection of any form of anti-Semitism right from the start.

In addition, the Vatican should have made clear that the lifting of the excommunications did not reinstate the bishops in their church positions, and that it was merely a preliminary step based on the church of the Second Vatican Council.

None of that happened. Neither the Curia, nor the press office nor the pope has learned the lessons of the PR disaster of Regensburg in 2006, when Benedict deeply offended the Muslim world.

In the space of a few days the Vatican has reopened the rift between the German bishops and Rome. Not since the dispute over the 19YY pregnancy advice service have Germany's church lords dared to confront their pope so brazenly.

There's unrest in the local church communities, young Catholics are distancing themselves and bishops have stopped trying to explain what cannot be explained. Even loyal servants like Cologne's Cardinal Joachim Meisner or Regensburg's Archbishop Gerhard Ludwig Müller were reported to have been appalled at the Vatican's bungling.

The broken glass can be swept away but it can't be mended. A degree of alienation and mistrust will remain between the German Catholics and their pope. People will take a closer look at his comments, question them more critically, behave more independently.

The Vatican has called on Bishop Williamson to retract his Holocaust denial. He may do so and declare that he had taken another look at the history books and didn't mean what he said about the Jews. It will change nothing. What could it change? Too many questions will remain unanswered. For example, why does the pope always hold out his hand of mercy in just one direction? Why doesn't he wave it over the black sheep Hans Küng or Leonardo Boff, the deeply pious liberation theologist?

How present is the disaster of the last century, the Holocaust, in the Vatican's view of the world if a dossier as explosive as the lifting of the excommunication of notoriously anti-Semitic bishops is handled in such a slovenly manner?

As far as the Vatican is concerned, the affair has been resolved by Wednesday's statement. Just as it was resolved last Wednesday and then on Tuesday this week. What's definite is that the honeymoon between the Germans and their pope is over. For almost four years this thoroughly secular country of Luther flirted with the pomp, the self-assuredness and the proud lack of modernity of the Catholic Church.

Commentators admired the rigor of the Tridentine Mass, the media covered "our pope" with fondness, curiosity and empathy. That's over. Benedict's rule has now passed a turning point. It is likely to be divided into a before and an after. This scandal surrounding Bishop Williamson has robbed this pope of his magic. It's a pity.