Now they're celebrating again. An "historic compromise" had been reached, German Chancellor Angela Merkel said at the conclusion of the G-20 summit in London, while US President Barack Obama spoke of a "turning point" in the fight against the global downturn. Behind the two leaders, the summit's motto could clearly be seen: "stability, growth, jobs." 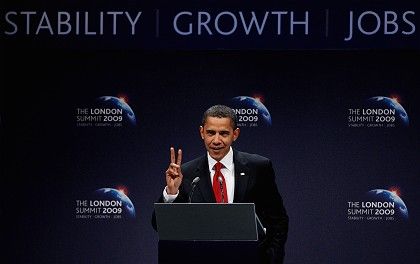 US President Barack Obama: The G-20 is laying the foundation for the next crisis.

When the celebrations have died down, it will be easier to look at what actually happened in London with a cool eye. The summit participants took the easy way out. Their decision to pump a further $5 trillion (€3.72 trillion) into the collapsing world economy within the foreseeable future, could indeed prove to be a historical turning point -- but a turning point downwards. In combating this crisis, the international community is in fact laying the foundation for the next crisis, which will be larger. It would probably have been more honest if the summit participants had written "debt, unemployment, inflation" on the wall.

The crucial questions went unanswered because they weren't even asked. Why are we in the current situation anyway? Who or what has got us into this mess?

The search for an answer would have revealed that the failure of the markets was preceded by a failure on the part of the state. Wall Street and the banks -- the greedy players of the financial industry -- played an important, but not decisive, role. The bank manager was the dealer that distributed the hot, speculation-based money throughout the nation.

But the poppy farmer sits in the White House. And during his time in office, US President George W. Bush enormously expanded the acreage under cultivation. The chief crop on his farm was the cheap dollar, which eventually flooded the entire world, artificially bloating the banks' balance sheets, creating sham growth and causing a speculative bubble in the US real estate market. The lack of transparency in the financial markets ensured that the poison could spread all around the world.

There are -- even in the modern world -- two things that no private company can do on its own: wage war and print money. Both of those things, however, formed Bush's response to the terrorist attacks of Sept. 11, 2001. Many column inches have already been devoted to Bush's first mistake, the invasion of Baghdad. But his second error -- flooding the global economy with trillions of dollars of cheap money -- has barely been acknowledged.

No other president has ever printed money and expanded the money supply with such abandon as Bush. This new money -- and therein lies its danger -- was not backed by real value in the form of goods or services. The measure may have had the desired effect -- the world economy revived, at least initially. And US consumption kept the global economy going for years. But the growth rates generated in the process were illusionary. The US had begun to hallucinate.

The addiction to new cash injections was chronic. The US had allowed itself to sink into an abject lifestyle. It sold more and more billions in new government bonds in order to preserve the appearance of a prosperous nation. To make matters worse, private households copied the example of the state. The average American now lives from hand to mouth and has 15 credit cards. The savings rate is almost zero. At the end of the Bush era, 75 percent of global savings were flowing into the US.

The president and the head of the Federal Reserve, Alan Greenspan, knew about the problem very well. Perhaps the Americans even knew just how irresponsible their actions were -- at any rate, they did everything they could to hide them from the world. Since 2006, figures for the money supply -- in other words, the total number of dollars in circulation -- have no longer been published in the US. As a result, a statistic which is regarded by the European Central Bank as a key indicator is now treated as a state secret in the US.

Only on the basis of independent estimates can the outside world get a sense of the internal erosion of what was once the strongest currency in the world. These estimates report a steep rise in the amount of money in circulation. Since the decision to keep the figures confidential, the growth rate for the expansion of the money supply has tripled. Last year alone, the money supply increased by 17 percent. As a comparison, the money in circulation in Europe grew by a mere 5 percent during the same period.

But the change of government in Washington has not brought a return to self-restraint and solidity. On the contrary, it has led to further abandon. Barack Obama has continued the course towards greater and greater state debt -- and increased the pace. One-third of his budget is no longer covered by revenues. The only things which are currently running at full production in the US are the printing presses at the Treasury.

At the summit in London, delegates talked about everything -- except this issue. As a result, no attention was given to the fact that the crisis is being fought with the same instrument that caused it in the first place. The acreage for cheap dollars will now be extended once again. Only this time, the state is also acting as the dealer, so that it can personally take care of how the trillions are distributed.

The International Money Fund was authorized to double, and later triple, its assistance funds -- by borrowing more. The World Bank is also being authorized to increase its borrowing. All the participating countries want to help their economies through state guarantees, which, should they be made use of, would result in a huge increase in the national debt. The US is preparing a new, debt-financed economic stimulus package. Other countries will probably follow its example.

We live in truly historic times -- in that respect, German Chancellor Angela Merkel is right. The West may very well be giving itself a fatal overdose.