At the moment, two catastrophic waves are crashing on the world's shores. In the Gulf of Mexico, an oil slick of unimaginable size is sloshing onto the beaches of Florida and the conservation areas of Louisiana surrounding the mouth of the Mississippi River. And, in Europe, a financial tsunami is rolling over Greece and threatening to swamp the entire southern coast of the Continent.

In affected regions of the United States, a national state of emergency has been declared, and the military and the president are getting involved. In Europe, politicians hesistated before taking action -- and, in doing so, helped make the wave that threatens to drown the entire common currency even more monstrous.

Both of these catastrophes are man-made rather than acts of God, such as the volcanic eruptions in Iceland. And, in both cases, the principle regarding who pays the piper should apply: Whoever made this mess should be significantly involved in the effort and costs of cleaning it up.

In the case of the oil slick off the American coast, that principle is being followed -- and it doesn't even seem to be an issue up for debate. The victims of the spill -- in this case, the fishermen -- are suing BP because it was the explosion of that company's oil platform that caused the catastrophe. Likewise, BP is also paying for the involvement of the US Coast Guard and other specialists, who are doing everything they can to contain the spread of the massive oil slick. US President Barack Obama made this crystal clear when he visited the Gulf Coast on Sunday.

In the case of Greece, this principle isn't functioning quite as well. But why is it that something that is so clear-cut on the high seas is so controversial in high finance? These are the facts: Greece and Europe's other problem countries pursued bad economic policies and lived completely beyond their means despite the fact that they had pledged to do just the opposite when they signed on to join the euro zone. Given these actions, the EU and the other members of the euro zone are politely demanding -- and completely rightfully so -- that these black sheep set their houses in order.

It's about More than Greece and the Euro

To be clear, the principal blame for the financial crisis lies with those states -- and Greece, in particular -- that have been driven into or toward the crisis by their own inefficiency and corruption. For this reason, any idea that leads to stricter monitoring of them is justified. In the worst of cases, it must be possible to deprive an EU country of its voting rights if its proposed national budget doesn't satisfy the demands of stability. Moreover, when the abuse is serial, it would be desirable to curtail the offending country's right to set its own budget and see Brussels dispatch a "savings commissioner," for example, to serve as both an emissary and shadow finance minister.

At the same time, it's also true that speculators working at major banks around the world swarmed these ailing countries and downright harried them to death. Like gamblers at a horserace, they put wagers down on Greece, Spain and Portugal -- in this case, betting that the horse would stumble mid-way through the race. In essence, they bet against the euro.

In fact, the reasons for having the winners of this game help shoulder the costs brought on by its consequences are even more compelling than they are in the case of the oil catastrophe in the Gulf of Mexico. Politicians from various parties should not try to gain advantage by bickering about who addressed this matter earlier or more decisively, and perhaps they should even introduce some new taxes on the financial markets.

Indeed, there's more at stake here than political gain, Greece or even the euro. What's really at stake here is governments' monopoly on power. In democracies around the world, there's a growing feeling that politicians are powerless in the face of global casino capitalism. The world's politicians need to both clarify and show who's boss -- and who makes the rules.

Granted, it will be much harder to make a clear-cut and airtight case for major claims for compensation than it will be against BP in the oil catastrophe. The circumstances are more complex, and it will be harder to establish the individual guilt of the perpetrators. Moreover, there's isn't a legal forum that politicians can go before to sue the giants for compensation. And there isn't a pot that the damages could come from. Perhaps the mega-speculators and the investment banks should be forced to contribute massive sums to a type of reinsurance organization that can come to the rescue when these kinds of catastrophes happen.

Profit at Any Price

Since this kind of after-the-fact claim is so difficult, it is all the more important to act before it's too late. In other words, we need to get financial players on the hook as fast as possible lest something like this happen again. The fact is that their unchecked "Change nothing!" attitude after the "big bang" of almost two years ago is the real cause of this mess and must urgently be stopped up -- just like the wells that are still spewing up oil unchecked on the ocean floor off America. From the corner offices of the wizards of finance all the way down to teller counter of the rural savings & loan, the attitude has remained exactly the same: profit at any price.

The obscene mindset of people like Fabrice Tourre continues to hold sway in vast swathes of the financial landscape. The Goldman Sachs fixed-asset guru devised investment products knowing full well that it was extremely likely that they would see a massive loss in value -- and still sold them to customers. When questioned about his responsibility vis-à-vis his clients before the US Senate's Permanent Subcommittee on Investigations last Tuesday, Tourre said that he had no obligation to serve as an adviser to "highly sophisticated" clients, such as Germany's IKB bank. In other words: They should have known what they were paying for.

The staid bankers of yore have morphed into pushers who sell financial products that they don't back themselves as well as -- in ideal circumstances -- insurance for investors who want to short them. At a certain point, these bankers seem like nothing more than slick used-car dealers who unload clunkers re-painted to look like luxury sedans on clueless customers at an exorbitant price.

Yet, a financial crisis was not supposed to be allowed to happen again. Almost exactly a year ago, German Chancellor Angela Merkel stood in the gaudy hall of a London hotel next to French President Nicolas Sarkozy and made a big song and dance about how leaders convened there for the G-20 summit urgently needed to hammer out and agree upon joint policies for regulating the global financial markets. That determination came in the wake of the first explosion on the global financial stage ignited by the collapse of Lehman Brothers. However, nothing concrete has happened since then. Not in London, and not at the subsequent summit in Pittsburgh.

And, now, we have the second explosion. And this time, it's not a bank that is in trouble. No, this time it's a country, and one whose potential collapse could precipitate a domino effect across Europe. How can any world leader be so narrow-minded as to want to fight against the rigorous and tight regulation of these dangerous financial business practices? Does any country really believe that its sheer size or better knowledge of how the industry works makes it more immune than other countries? If so, it is naïve. Everyone could be affected by the consequences.

The Need for Ruthlessness

Of course, we still have to dispel with the argument being made by banking lobbyists, namely, that if they are held monetarily accountable for the crisis in Greece, they might even collapse themselves. But this argument only holds water when it comes to the forthcoming emergency aid, and it can be taken into political consideration. The issue here is a contribution -- and not a contribution that bleeds the banks to death. What's more, in the end, they will profit from the funds they have made available because it increases the chances that they will get back the money they've lent to the Greek government.

But when you move away from the issue of this emergency aid and toward the issue of the stricter regulation of international financial markets, this argument doesn't hold water either. If everyone is facing the same new restrictions, everyone's ability to compete should remain the same.

Big companies both enjoy the opportunities and assume the risks of their operations, whether they be on the high seas or in the financial markets. Chances are that the oil disaster and its astronomical costs will endanger BP's survival, just like the horrific tanker accident off the coast of Alaska 21 years ago threatened its competitor Exxon.

When it comes to their dealings with players in the financial markets, European politicians must be as hard-nosed as President Obama has been with BP. If you cause a catastrophe, you should have to pay for it -- even if it pushes you to the precipice. It can't be that those who cause catastrophes can use their alleged "systematic" importance to justify carrying on with business as usual and that governments around the world put their clean-up efforts on hold.

There's a lesson to be learned from the Exxon Valdez disaster from 1989: The oil company has been making a tidy profit for years, but the fishermen in Alaska are still waiting for the fish to return. 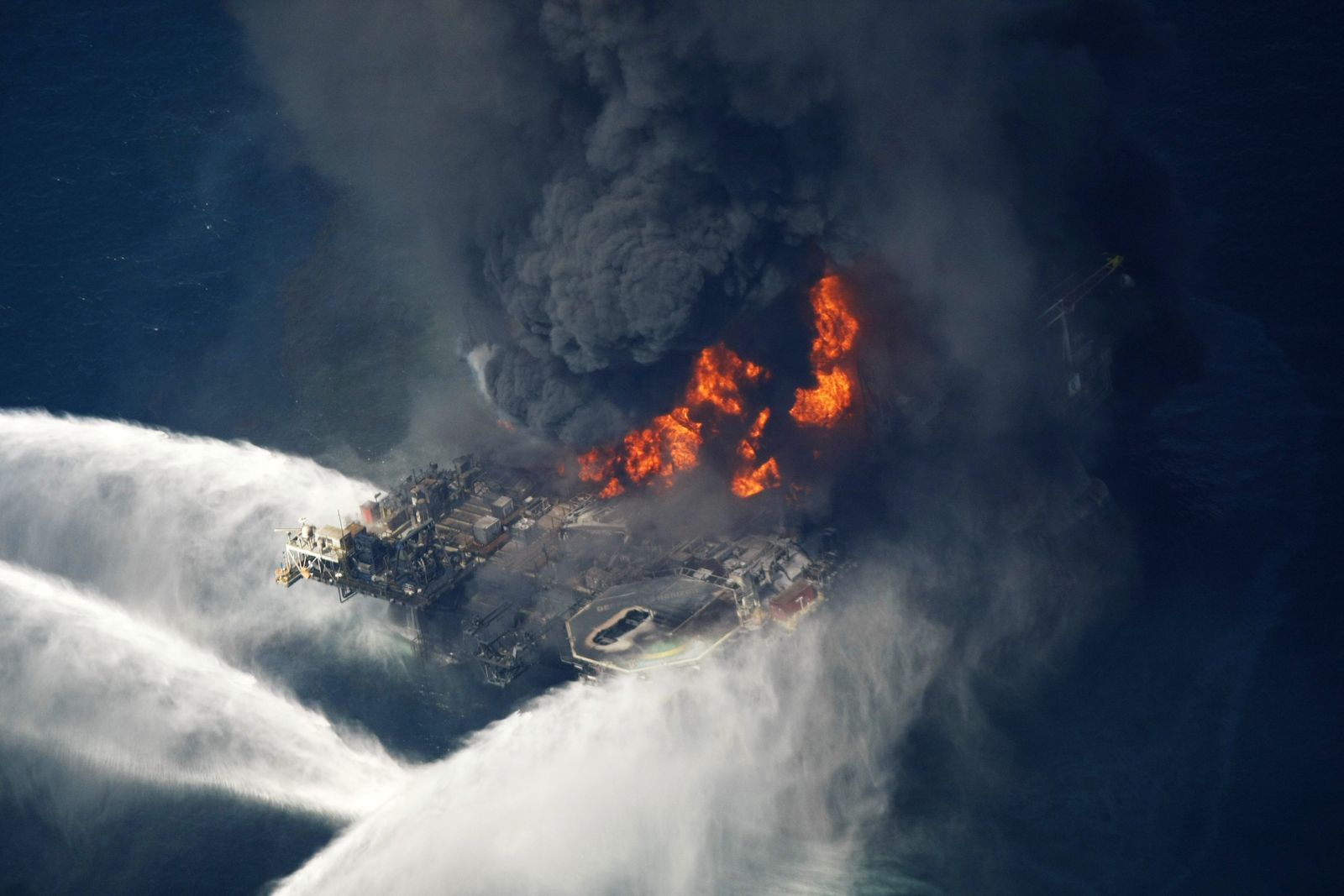 An oil rig burns last week in the Gulf of Mexico off the coast of Louisiana.