Tens of thousands of deaths in a country that lies not too far southeast of us. An extremely complicated military conflict in which the most varied lines of interest converge. A United States president who is particularly reluctant to undertake new military engagements on the heels of an electoral campaign centered around domestic issues and a failed engagement in the Arab world. A despot who does not recognize the need to negotiate promptly and seriously.

European diplomacy and crisis management are disappointingly far from meeting their self-imposed goals. Political initiatives are failing before they have even been put in place. Long debates about the merits and dangers of an arms embargo. The US Secretary of State speaks of a "problem from hell" -- the hatred, he says, is almost unbelievable, but the US, faced with a very difficult situation, is "doing all we can to try to deal with that problem."

What sounds like a description of the Syrian conflict in the summer of 2013 is a fairly precise summary of the view of the war in Bosnia up until the summer of 1995. Yet most observers see the current Syrian conflict through a lens colored only by the interventions in Afghanistan and Iraq. These conflicts stand for Western hubris, for the insolubility of some religious and ethnic conflicts, for the danger of a "slippery slope," in which even a minor, short-term military engagement may end up lasting for years.

In other words, the great legacy of the past decade is that Afghanistan and Iraq are the dominant lessons for those advocating in favor of interventions. Former US Secretary of Defense Robert Gates even went so far as to recommend that anyone who was considering sending American troops into that wider region should have his head examined.

But is that really the right lesson to draw from recent years -- to fundamentally rule out military action? Or is it rather that, due to a lack of political success in Afghanistan and Iraq, we have forgotten the lessons we had learned from the 1990s, particularly from the Balkan Wars? That conflict taught us that in certain circumstances it may be necessary to consider the limited use of military means in order to force a diplomatic solution -- and thus peace.

Apparently, the old saying that politicians and the military tend to fight the "last war" a second time, applies here as well. Impressions from most recent experiences are, after all, the freshest. However, it can also mean that we end up viewing the current crisis through the wrong filter. The situation and the development of the conflict in Syria are in many respects more reminiscent of Bosnia than Iraq or Afghanistan. And Bosnia continues to offer lessons that are more relevant today than ever.

All officials and policymakers involved are surely aware that the current policy being pursued by the West and the international community with regards to the Syrian conflict is completely insufficient and unacceptable. Appeals, sanctions, embargos, certain forms of support for the opposition, diplomatic offensives, and mediation attempts: In the end all that has been -- rather half-heartedly -- undertaken by external parties has failed in Syria, as it did in Bosnia prior to 1995.

A first key similarity between the two conflicts can be found in the (initial) inability to get the fighting parties together around a table in order to achieve a viable diplomatic solution. Just like Slobodan Milosevic in the 1990s, Syria's president Bashar al-Assad sees no obligation at present to negotiate seriously. In Bosnia, too, peace plans and blueprints ("Vance-Owen") were laid out in the early stages, but led to nothing because of the West's lack of willingness to implement them.

The conclusion of the Dayton agreement, which finally ended the Bosnian war in 1995, was ultimately only possible because Milosevic and the Bosnian Serbs, in the face of new realities, suddenly developed an interest in a negotiated solution after all; the Croatian side had made territorial gains and the NATO operation "Deliberate Force" had shown that the West was taking the matter seriously. In other words, the result negotiated in Dayton, which despite all its weaknesses was able to pave Bosnia-Herzegovina's way toward a future free of war, was only made possible by the threat (and limited use) of force.

This is also the decisive issue for Syria: Assad has apparently returned to a position of strength, and it is one from which his regime will never be ready to make the necessary concessions. As long as Assad is convinced that his situation could continue to improve over the course of the conflict, or that he could even resolve the war in his favor, he will continue the fight. The international community needs to change this calculation if it wants to reach a political solution.

Secondly, the debate about arms supplies in both cases revealed (reveals) the regime's structural advantage over the opposition. In the Balkans, Sarajevo long decried the arms embargo, which clearly played into Belgrade's and the Bosnian Serbs' hands. Similarly, the Syrian opposition is now trying to counteract the material supremacy of the Assad regime, which is being supplied by Moscow and Tehran and massively supported by Hezbollah. It is only a slight exaggeration to observe that the only ones who have hardly received any support at all are the moderates within the Syrian opposition. That these forces would wither is to be expected -- and herein lies the real tragedy of Western failure.

Thirdly, even in Bosnia, a solution was only possible on the basis of a common understanding between the US and Russia. Although the two countries were at odds where their respective Balkan policies were concerned, they had to find common ground on the way toward the Dayton agreement. The United States' and Russia's somewhat revived Syria initiative is thus appropriate and important. Only an American-Russian entente can lead to successful diplomacy as part of a necessary contact group.

Can we agree on parameters for post-war order, a balance between the various religious groups, the composition of a transitional government and on a possible international presence after the end of the war? Hideous compromises may be necessary here, but it will not work without Russia. In the Balkans, deliberations within the contact group were not easy either, but it was successful because all key players, including Moscow, sat at the table.

Today, we have a group which calls itself "Friends of Syria." While this is important for the international legitimization of the opposition, it can do little to end the conflict. It would make more sense to have a conventional contact group under the umbrella of the UN, consisting of Turkey, Iran, Russia, the US, and the EU at its core, and perhaps supplemented by Saudi Arabia, Qatar, and the participation of the Arab League.

Fourthly, for a long time the situation in Bosnia was -- as it still is today in Syria -- assessed as if the costs of inaction were lower than the potential costs of an intervention. This calculation did not change in Bosnia until after the Srebrenica massacre in 1995. In Syria, however, we have unfortunately probably passed the point at which an intervention may have been justified, useful, and possible with reasonable means. And, as sad as it is, the general public in the West almost seems to have become accustomed to reports of massacres in Syria.

Bosnia taught us another thing: The longer an ethnic or religious conflict lasts, the more difficult it is, at the end of the war, to get the groups involved to commit to a common post-war order and reasonable reconciliation steps. In this respect, arguments that the war in Syria should simply bleed itself dry are not only morally irresponsible, but also fundamentally incorrect politically.

Whether a limited intervention, in the form of a no-fly zone or limited bombings, as in the Bosnian war in 1995, could significantly contribute to a negotiated solution in Syria is certainly one of the most difficult issues currently facing international security policy. But those who simply brush this question aside, without any serious examination of the chances of success, has learned absolutely nothing from Bosnia and will keep on repeating these mistakes. It is politically irresponsible to exclude certain options from the outset. It was also without a doubt wrong to imagine Assad to be running on empty so soon and to assume that the problem would solve itself.

Besides, even without military intervention a related question could also arise: What are we prepared to contribute to a post-war order in Syria? It is likely that a politically negotiated solution could call for an international protection force, just like in the Balkans. Would we quickly abdicate any responsibility? Or are the EU and NATO strategically prepared?

The term quoted at the outset of this piece, "problems from hell," which the former US Secretary of State Warren Christopher used to describe the Bosnian war, was popularized in particular by the new US ambassador to the UN Samantha Power in her study about genocide prevention ("A Problem from Hell: America and the Age of Genocide, 2002"). One of the key points made by Power, who was a driving force behind the Libya intervention, was this: Accepting that there are "problems from hell" deflects responsibility from onesself. Inaction is also very much a decision and does not protect against being responsible for catastrophic developments.

This basic observation applies to Syria in particular, since even more is at stake there than in the Balkans in the 1990s: The risk of a regional "conflagration," of which German opponents of intervention have frequently warned, has long since become reality -- without a doubt also because of our inaction. We are looking at a disintegrating country with chemical weapons in the heart of the world's most unstable region. Syria has become a rallying place for jihadists from around the world.

The importance of the regional proxy war with its religious and political power components extends far beyond Syria and could potentially lead to very serious consequences -- for the future of all neighboring countries, the resolution of the Iranian nuclear conflict, and the struggle for supremacy in the Middle East. And the number of victims continues to climb steeply month by month.

One of the great achievements of international politics and international law after the genocides of the 20th century was precisely the idea that the international community could not just ignore its responsibility, and should even take military action in extreme cases of mass atrocities. A number of years ago, the UN General Assembly endorsed this new principle, which limits national sovereignty as traditionally understood, as the "responsibility to protect" (R2P). Without a doubt, this signified progress in terms of the modern Western understanding of human rights and international law.

Unfortunately, today there is not much left of the initial R2P euphoria. The West appears to look at Syria, as it did Bosnia 20 years ago, as a problem from hell that we should stay far away from. Should this be our final lesson from the Syrian crisis, it would be a step backward for the capacity of the international community to secure peace though the United Nations. For the West, it would be more than that. It would be a declaration of bankruptcy, both moral and political. 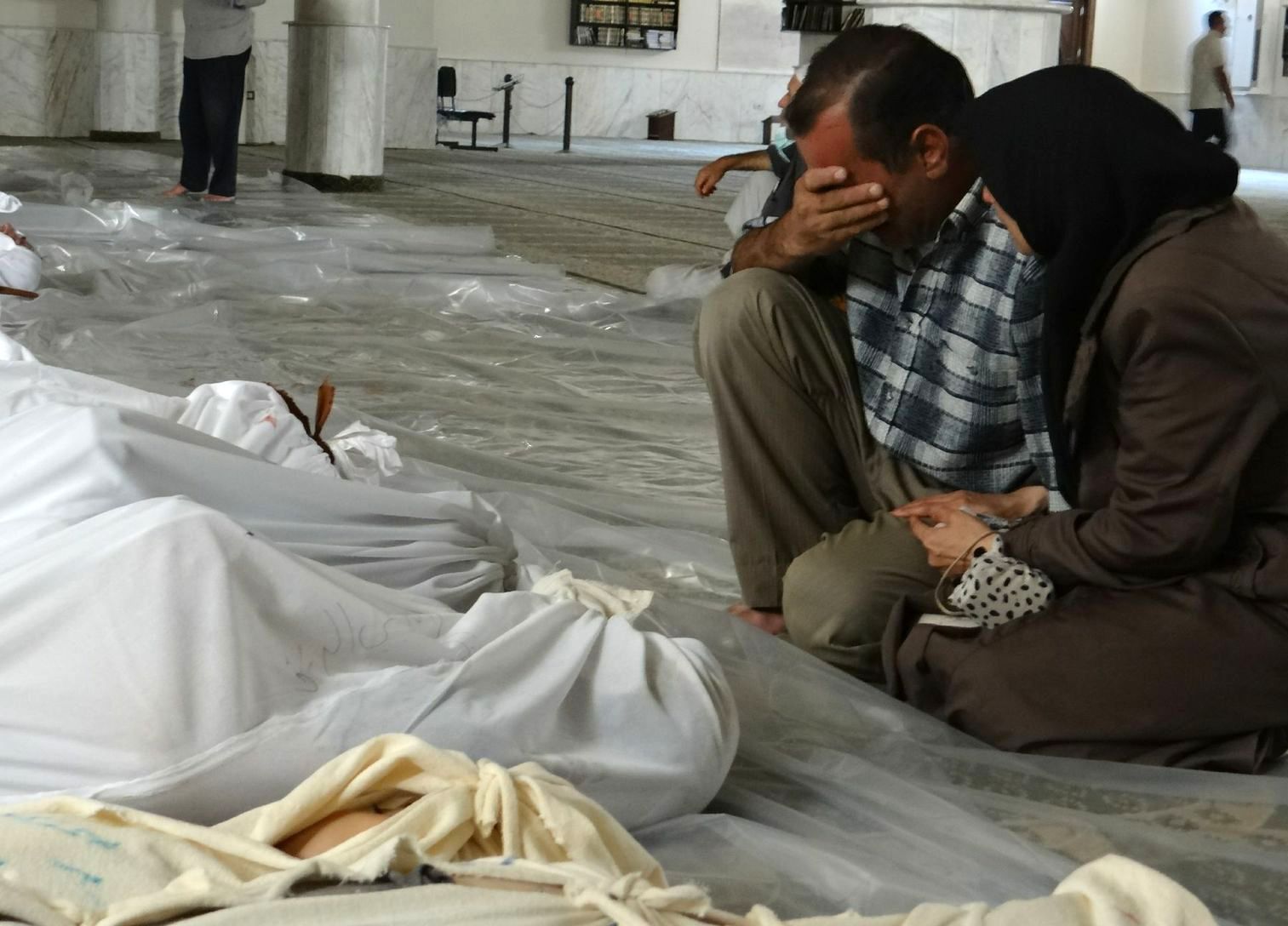 Has the world learned the lessons from the Balkans?