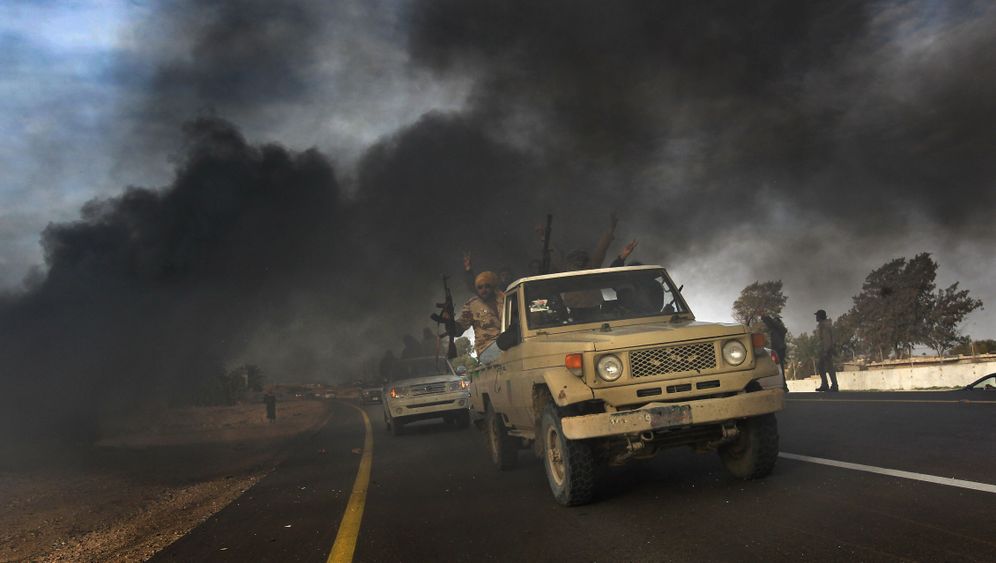 Photo Gallery: The Dictator Strikes Back

Yusuf helped to transport the explosives from old bombs to the front as the opposition fought to take control of Benghazi in eastern Libya. Today, the young man, with his dark curls of hair, is wearing a beret with a red star on it. The men fighting along with him call him "Chifarris," an apparent reference to Che Guevara. The 23-year-old's mother came to Libya from Germany 30 years ago, and his forefathers fought against their Italian occupiers in the North African country. "Whatever happens will happen," he says of the current battle against dictator Moammar Gadhafi.

At the green west gate to the Bedouin city of Ajdabiya, Yunus waits, indecisively, along with hundreds of other fighters, for a decision on whether or not they will continue forward with their drive. They cover their eyes to protect them from the desert sand and peer towards Brega to the west, where the pipelines from the Defa oil fields run to the Sirt Oil Company's refinery, the second largest in oil-rich Libya. That's where fighters supporting Gadhafi arrived in the morning, supported by airplanes and heavy artillary. Nobody knows exactly what is happening there now, or whether the fighting is still continuing.

Just beyond Brega begins western Libya, parts of which are still under Gadhafi's control. 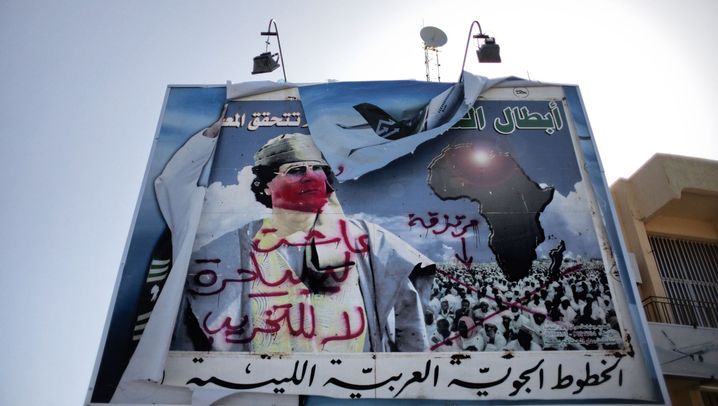 The men have set up a 107-millimeter rocket launcher, a 36-year-old model manufactured in Korea. Standing behind it is Asman Bueghi, a man wearing a blue camouflage suit. He is ready to fire at anything that approaches them along the road. "If we die, then we are all going to die," he says, grabbing a rocket and posing with it for a photo. The rockets have a maximum range of 7 kilometers (4.3 miles). Bueghi says he has always been a soldier and that he will always be one. "We are a good country," he says. Set in the sand next to him are green wooden boxes labelled with explosives warnings. Further ahead, a French M8 cannon is in place, with a smiling pensioner watching over it. Beyond that, all one can see is the vast desert.

A teenager makes his way through the crowd carrying a sword. "It's the only weapon I have," he says, stretching it up high. "Me, god and my heart," he says, holding his hand to his chest. Ambulances drive by from the front, transporting the first of the injured. The hospital in Brega was apparently too small for them. "Move, move," the passenger in the front seat hollers, waving his arms out the window in order to disperse the crowd gathered along the road.

Mazdas, Nissans and Toyotas can all be seen driving in the other direction to deliver supplies to the front. Fighters with cloth covering parts of their faces, to protect against the sand, hold their Kalashnikovs high and bang them into the air. Fear? No, we're not afraid, say the fighters. But many of them call out "pray for us!"

'Anyone with a Car Should Chase the Murderers'

At the hospital in Brega, one can hear the dull thump of detonations. Yusuf says it is enemy fire. The hallways are full of people who have come to help. Even pharmacists have donned turquoise doctor's smocks. One young man lying on a bed is getting a wound on his hand bandaged and shrapnel has struck his thumb. "For Libya," he calls out, creating a victory symbol with his forefinger and middle finger on his uninjured hand.

One of the helpers plays an unsteady video on his mobile phone of a fighter who was hit in the neck. The man is no longer in the hospital. There is a trail of blood droplets on the sidewalk outside the hospital leading to a small building about 20 meters away. It is the hospital's morgue and inside lie three bodies, the feet of the man in the middle are wrapped together with white bandages. It is a tiny facility; a fourth body lies on a stretcher on the floor covered with a lab coat, its face still covered with sand, dried sweat and blood.

It was 5:00 a.m. when the Gadhafi loyalists approached in 50 vehicles from the direction of Sirt, the neighboring town to the west, say family members of the hospitalized rebels. They occupied the oil refinery, the airport and the port, they say. But the fighters from Ajdabiya were able to push them back.

"Anyone with a car should chase the murderers," the driver of an ambulance calls into his radio. Particularly those with four-wheel drive, he adds, given that the pro-Gadhafi forces fled into the desert. Two ambulances head out to collect the rest of the dead.

Shortly before they arrive at the refinery, they come across a group of rebels. They captured and killed one of the pro-Gadhafi fighters, who lies dead on the ground, his face in the dirt. The rebels claim that he is a mercenary from Mauritania. They are playing around with the corpse, waving with his shoes and dragging him on the ground. One of the fighters playfully aims his Kalashnikov at the dead man and his comrades jump out of the way. Then the body is picked up and put in the ambulance.

Yusuf Sultan, who works at the refinery, climbs into the bed of one of the pick-up trucks and points to the two pipelines that travel 200 kilometers through the desert. "It's the oil," he says. "Gadhafi wants the oil. That's a good sign; it means he is running out."

So far, there have been at least five people killed and 20 wounded in the battle, says Nasser El Suhbi, an anaesthesiologist and emergency room doctor who came from Benghazi to pick up the most seriously wounded. Suhbi says that Benghazi, the most important city in the part of Libya no longer under Gadhafi's control, can only take on the worst cases. Some 80 percent of the country's nurses, most of whom came from the Philippines, have left Libya and there is a shortage of medical supplies, particularly anaesthetics. "Maybe there is enough for another month," Suhbi says.

The doctor isn't just worried about hospital supplies. Outside, a group of people are shooting joyously into the air. "They should be saving their bullets," Suhbi says.

On the return trip, the new radio station from eastern Libya is playing. "This is the voice of free Libya," the moderator says and addresses the city of Sirt directly, the town from which the mercenaries are thought to have approached. "I call on you, the sons of Sirt, you children of Libya! Do not obey the tyrant Gadhafi! You know that he is crazy and that he kills everybody. We love you, we are all one family. You have fought many battles with us. Fight with us again! Rise up!"

Yusuf leans out of the window and yells "victory!" At the same time, two jets are attacking Brega and drop bombs near an ambulance there, as a Danish photographer reports later. But even if Gadhafi should continue his attacks on the rebels, Yusuf and his comrades say they don't want to see Western troops in Libya. A no-fly zone, he says, would be fine. "But if the Americans come," he says, "they would steal our revolution."