"A New Wave of Terror, a Descent into Hell," read the headline for this Friday's edition of the Tunisian newspaper La Presse de Tunesie in reaction to the Thursday murder of a prominent opposition politician. It's a crime that many in the country fear could propel the country into political chaos.

Mohamed Brahmi was the leader of the nationalist Movement of the People party, and the 58-year-old's assassination sparked protest across the country on Friday. In the provincial city of Sidi Bouzid, which was Brahmi's hometown and the birthplace of the uprising against deposed President Zine el-Abidine Ben Ali two years ago, an angry mob lit the Islamist Ennahda Party's headquarters on fire. Meanwhile, thousands of people took part in a general strike called by one of the country's largest unions, and European airlines were forced to cancel most of their flights.

Brahmi was shot multiple times in front of his wife and youngest daughter on Thursday, sending thousands onto the streets to express their anger over the murder, despite the heat and fasting for the holy month of Ramadan. "We are all Mohamed Brahmi!" they shouted. Others yelled "Dagage!", French for "Get lost!" It's the same battle cry that Tunisians used in January 2011, when they sparked the Arab Spring by becoming the first country in the region to depose their autocratic leader. Only now their words are directed at the Islamists, who won the most support in the first free elections after the revolution and are now part of the current coalition government.

The secular opposition accuses the government of being responsible for Brahmi's murder. The coalition, led by the Ennahda Party, stood back as religious fundamentalists spread hate-filled messages in Tunisia's mosques, government opponents say.

Tunis tolerated violence and terrorism, which resulted in Brahmi's death, says Ahmed Najib Chebbi, head of the opposition Democratic Progressive Party (PDP), who wants to see the government dissolved. In February, protests following the murder of opposition politician Chokri Belaïd forced the government to step down. Now it has become clear that Brahmi and Belaïd were shot with the same weapon.

The reason the opposition wants to blame Brahmi's murder on Ennahda is clear. Brahmi was a declared opponent of the Islamist party, whose members were persecuted and exiled by former dictator Ben Ali. Brahmi went on hunger strike several times to protest what he felt was the secret political agenda of the Islamists.

Unionists have vocally accused Ennahda of creating its own intelligence service to spy on the state from within. In this way, the Tunisian Islamists were allegedly trying to secure long-term power, just like the Muslim Brotherhood in Egypt.

Comparisons to Egypt have become ubiquitous in Tunisia. Just like in Egypt, after the ousting of their autocrat secular Tunisian voters also voted for religious candidates, who piously and humbly sought to distance themselves from the corrupt kleptocrats of the previous regime. And, just like Cairo, Tunis became disillusioned not long after the election. Neither the Muslim Brotherhood, nor Ennahda were able to live up to voters' high expectations. They had hoped that in addition to seeing more democracy, their living conditions would also significantly improve.

In both Arab countries, the new leaders mishandled criticism and growing distrust in their abilities. Instead of revealing their plans, the Islamists in both Cairo and Tunis isolated themselves further as outside pressure increased -- a holdover reflex from the times when they were forced to operate in secret under the old regimes.

The Tunisian opposition now hopes that, just like in Egypt, the Islamists can be chased out of office by the people. A protest movement called "Tamarod," modeled after the Egyptian group with the same name, has been trying for weeks to mobilize enough Tunisians to topple the coalition. But so far, the group has had little success. One reason for this may be that Tunisians are generally thought to be better educated than their Egyptian peers, and thus perhaps less susceptible to populist tactics.

But outrage over Brahmi's death may bevenough to spark a revolt against the government, something that Tamarod hopes will happen. After the murder, the organization called on young people in every province to protest on the streets "until this government falls."

Observers believe that Brahmi's shooting can only damage Ennahda and help the opposition. "It is unlikely that Ennahda leadership is connected with these assassinations, but it is likely that Ennahda supporters or sympathizers are," William Lawrence of the Maghreb Center in Washington, DC told Dubai daily The National on Friday. Nevertheless, Lawrence added, these radicals have likely done a disservice to the Islamists, because the murder will only strengthen the Tamarod movement. 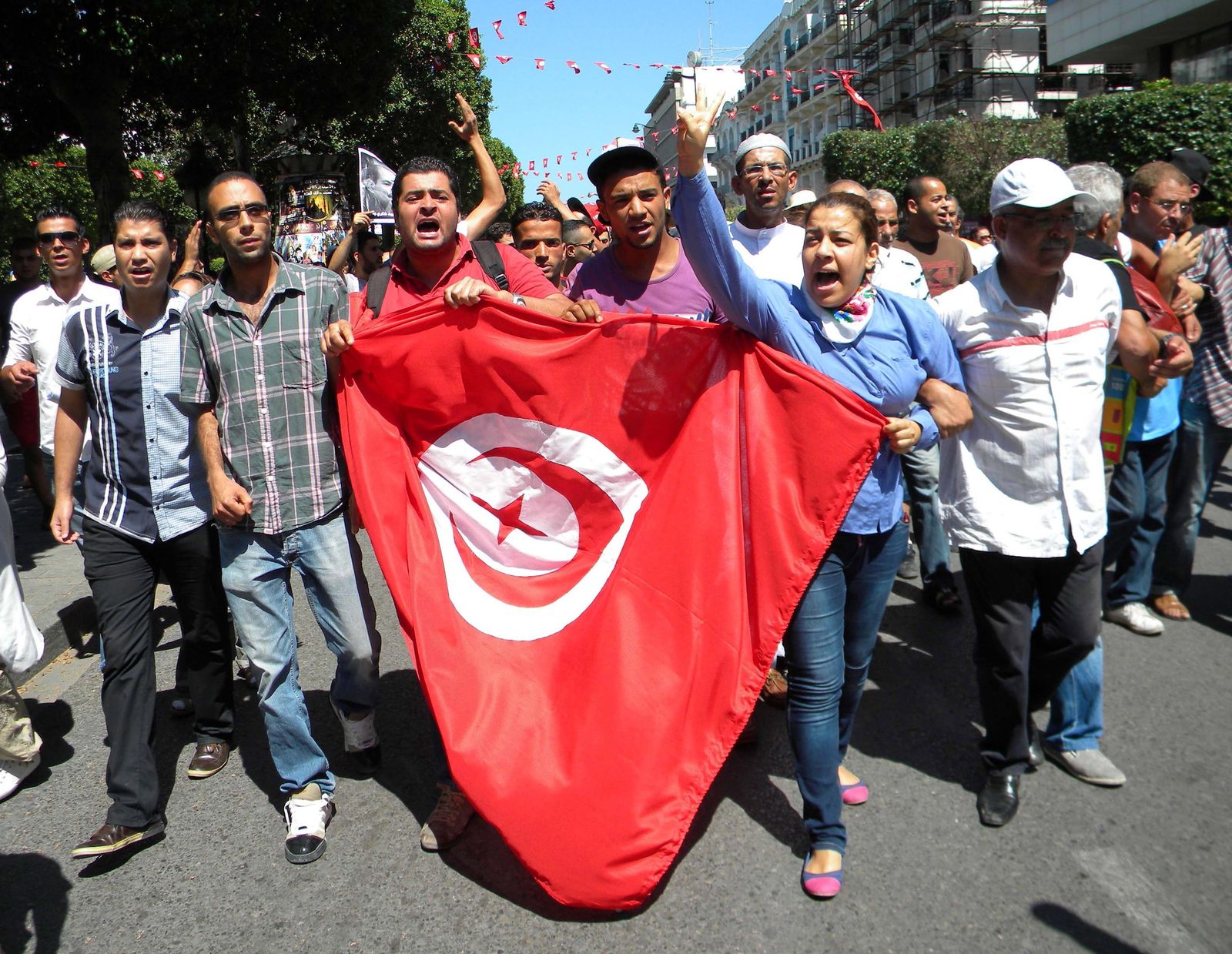 Tunisians demonstrate against the killing of opposition politician Mohamed Brahmi in Tunis on July 25.