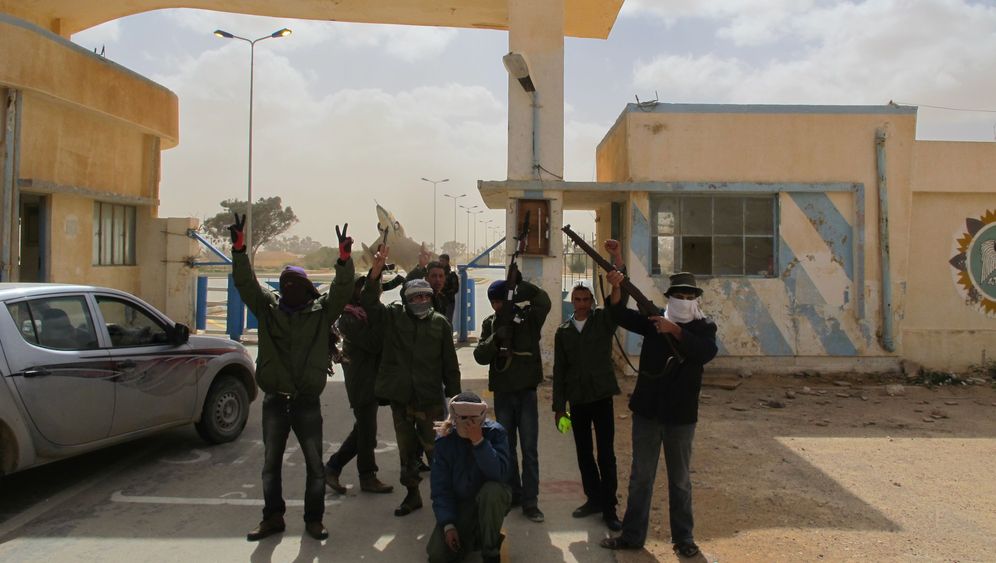 The apparent collapse of the Gadhafi regime allows a first insight into the despot's hitherto-insular world of shadows. Prisoners tell of the torture they endured as masked rebels take over army bases. The façade of the supposedly-refined leader, who the West courted in recent years, turns out to have been just the masquerade of a ruthless dictator.

Haddud knows the cell well, he says, every nook and cranny. He was locked up here several times, for weeks at a stretch. "We called it the chamber of darkness," says the 50-year-old Libyan.

He yells more than he speaks, and gesticulates wildly. Only a few holes allow slivers of light into the small prison room. The police -- Moammar Gadhafi's minions as Haddud calls them -- chained him to the walls with handcuffs. He was only allowed out of his cell for hours-long interrogation sessions. His voice breaks repeatedly. He is embarrassed that he, as a grown man, has tears in his eyes.

Haddud walks through the corridors of the prison in Tobruk, a city in eastern Libya known in Europe as the site of fierce battles during World War II. The police station with its attached jail was one of the first buildings the rebels stormed about a week earlier. Haddud was with them. Within half an hour, he says, hundreds of people had ransacked the two-storey building in the port city's central square, released all the prisoners from their cells and then set fire to the complex. The corridors are still black with soot and it smells like burnt plastic. Broken chairs are scattered everywhere. Someone smeared the message "Gadhafi over" into the soot with a finger.

Haddud continues to yell his story. The burly history teacher says he was arrested three times by police. To this day, he does not know why. "They always asked me the same questions, whether I was collaborating with foreigners," he says. "They alleged that I wanted to incite the schoolchildren with propaganda against the government." The last time was in 1983, when the police took him to Benghazi, Libya's second-largest city, after the initial interrogation. He remained there in jail for six years, with no trial, and no contact with his family. When he was eventually freed, he could no longer work as a teacher. "The only thing that I could still do was drive a taxi," he says.

The overwhelming anger of Haddud and the many other victims of Gadhafi's surveillance state unloaded on this police station, a symbol of oppression. In the courtyard, there are several burned-out police vehicles, set alight by an angry mob. The police officers themselves, Haddad recounts, had already fled hours before in fear of retribution from the people they had persecuted. "We will not hold every individual accountable," a masked gunman says in the police station. "But those at the head of regime, they simply must pay." Moammar Gadhafi, many of the rebels believe, must pay for his crimes with his life.

In these days of chaos and uncertainty in Libya, it is slowly becoming clear just how the despot's apparatus of oppression worked. Journalists have now managed to find their way into the insular country, with the security personnel on the border to Egypt having fled. The stories from Haddud and thousands of Libyans like him are throwing light on the Gadhafi regime. They show that -- despite his mid-1990s about-face on the world stage, when he slowly brought his country out of international isolation -- Gadhafi has shown little leniency in his own country. He is now trying to crush the ongoing rebellion with all the means at his disposal.

In eastern Libya, the security forces have given up. Silent armed rebels guard the entrance to the airstrip on the giant Nasr military base. Young men have armed themselves with guns and grenades from the armories; they're in control here. The soldiers who once lived on this base are gone. Young militia groups pose in front of a Libyan warplane and wave their weapons around. "We'll guard this base until we have a freely elected government," one of them says. "If Gadhafi loyalists come back, we'll fight to the last man."

'Scenes from a War'

Mustafa, a doctor from Tobruk, has documented just how brutally the Gadhafi government has tried to suppress the uprising. He helped out for several days in a clinic in the coastal city of Benghazi, one of the centers of Libyan resistance. Twenty-four hours a day, he said, seriously injured demonstrators were brought through the doors. The doctors operated round the clock. "They were like scenes from a war," he said. "We had to decide quickly who we could help and who to give up on." He estimates he saw around 70 dead. There were, he assumes, many more.

During a short break from caring for his patients, Mustafa made a film with his mobile telephone. The images are now flickering across the screen of a television in a Tobruk hotel room. The shaky scenes are disturbing. He scrupulously filmed the dead in the hospital morgue. Many of them had been shot directly between the eyes.

Several recordings similar to Mustafa's have surfaced in the meantime, and they would seem to confirm the swirling rumors that snipers had been sent to shoot down the protesters. "Gadhafi has declared war on his own people," says Mustafa. "Every day his loyalists commit war crimes against us, and the world looks on and does nothing."

Mustafa is imploring Western television journalists to spread these images to Europe and beyond. Governments in the West, he said, have to see that the Libyan people need help. He plays another video. Several Jeeps can be seen in front of a hospital. African mercenaries in various kinds of uniforms drive through the crowd. They fire into the air, but also at demonstrators in front of them. The images would appear to be proof that Gadhafi has imported thousands of unscrupulous mercenaries from outside Libya to put down the protests with lethal violence -- because many within his own military have switched sides.

The Last of His Scruples

The government may seem crippled, but it's trying hard to prevent the broadcast of such recordings. One of Gadhafi's last ministers -- one of the few who has not resigned -- said Wednesday that all journalists in Libya were illegal and would have to face draconian punishments. The regime has interrupted satellite uplinks for days using still-mysterious technical methods, meaning TV and print journalists have had trouble filing stories. In the contemporary Arab world, only Saddam Hussein has tried so intensively to censor reports from inside his nation.

The censorship apparatus has worked much better in western Libya, in Tripoli and the surrounding cities. Western journalists have not yet reached the capital and have been forced to rely exclusively on eyewitness accounts, all of which speak to the brutality of the attacks on protesters. Libyan guards on the western border with Tunisia search refugees intensively for memory sticks and mobile-phone cameras to keep them from carrying photos of the unrest to foreign reporters. Some, nevertheless, manage to smuggle out photographic records of their experiences and have made them public.

Government opponents fear new violence on Friday. In Tripoli they've called for a large demonstration against Gadhafi. But thousands of soldiers have been posted around the city in an effort to break up possible protests. The opposition committees in eastern Libya fear that with a last brutal blow, Gadhafi hopes to end the revolution.

The dictator, it would seem, knows his hour has come. And seems to have abandoned the last of his scruples.