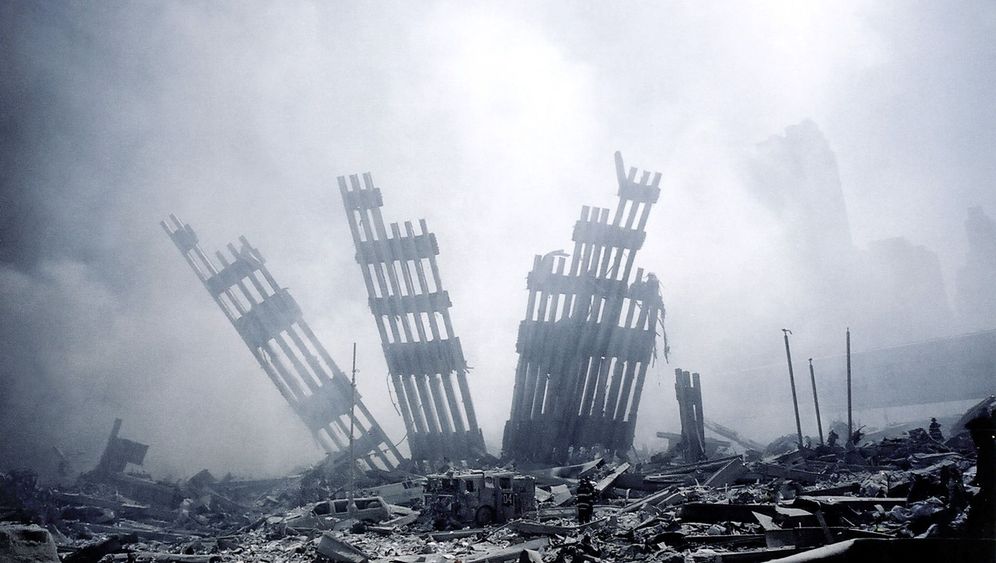 On the morning of Sept. 11, 2001, John Ottrando was one of the first firemen to arrive at the World Trade Center's smoke-billowing north tower. He came with Engine 24. Over the course of this single day, he would lose 13 colleagues and friends from his fire station in Greenwich Village. Nine years and 232 days later, when he heard the news about Osama bin Laden's death, he didn't know what to think. Instead, he started bawling like a child.

Ottrando, 54, is a large, brawny man, the grandson of Italian immigrants, an Obama supporter and a proud New Yorker. Not long ago, he retired from the New York City Fire Department after 24 years of service. He says he had had enough, and he has enough courage to admit that he has never been able to get the images, sounds, sensations and smells of 9/11 out of his head.

In fact, they have been a constant part of his life. There is the image of the charred body in the lobby of a person who was killed when fire shot out of the elevator shaft. There is the sight of plummeting people crashing into the ground to his left and his right and the fear of being hit in this terrifying hail of bodies. There is the subtle feeling of guilt for having survived. And, lastly, there is that unforgettable sound of the collapsing towers.

Ottrando can't say exactly why he cried last Sunday when President Barack Obama announced the death of Osama bin Laden. He mulls it over while sitting in a leather booth at the Lower East Side's Trattoria Il Bagatto and scarfing down a plate of gnocchi. "I was relieved," he says, "relieved; but, yeah, it was also about revenge."

Still, he adds, bin Laden's death won't bring any of the dead back to life. What's more, he says that, since 9/11, he has asked himself at least once a day why people have to go on killing each other.

John Ottrando's feelings match up pretty well with those of most other New Yorkers these days. He found the television images of bellowing beer drinkers on Times Square, of people chanting "U-S-A" and of celebrating crowds surrounding Ground Zero to be a disappointing media spectacle, the kind of distorted image that TV channels produce these days when they're trying to drum up ratings.

In reality, on Sunday night, when Obama had the good fortune to be able to announce the death of America's public enemy number one, there weren't any masses of people out and about in New York -- neither near Ground Zero nor in Times Square. A few hundred people did take to the streets, but that's not much in a bustling metropolis like New York. The majority of them were so young that they must have still been children when the World Trade Center collapsed.

Ottrando says that "waving little American flags" would have never even crossed his mind on Sunday night. "There were a few kids, probably from Ohio or somewhere else," he says, "who don't have a clue about what it's about here."

Since the deadly raid against bin Laden has pushed forward the 10 year anniversary of the 9/11 attacks in people's minds, it's hard to define exactly what it is about. The mood in New York these days is subdued, uncertain, puzzled even. It is a bit like Ottrando's pale face, which is difficult to read. It's hard to tell how much that traumatic day still haunts him or how things have gone for him over this last decade.

Ottrando says that everyone here realizes that bin Laden's execution won't solve any problems. Everyone also knows that there is no reason to celebrate when someone is killed with shots to the head and chest. He admits that there is a certain feeling of satisfaction, a sense that bin Laden got what he deserved. The city's newspapers have repeatedly described the moment as "bittersweet," and Ottrando finds it an apt description.

Still, no matter how New Yorkers feel, the city's greatest enemy has been taken out. Bin Laden was the man who inspired his supporters to plant bombs in Times Square and who wanted to see the Brooklyn Bridge brought down. He hated everything about the city -- its vitality, its freedom, its lack of inhibition and its brilliance.

And even without knowing him, Osama bin Laden also hated John Ottrando. Sounding like a proud New Yorker from out of the movies, Ottrando says: "The city stands for everything that goes against the grain of those people. And that includes the fact that Christians and Muslims, Buddhists and what have you get along well here or at least leave each other in peace. They will never get that, and we will never do things any other way."

New York Mayor Michael Bloomberg didn't formulate it much better when he paraded to Ground Zero with a large entourage on Monday afternoon. His speechwriters composed an eloquent and fitting speech, which their boss delivered in his customary deadpan manner with the massive construction site as his backdrop.

Spirit Has Never Been Stronger

Later, while touring the construction pit of the new World Trade Center, Bloomberg was asked about what he thought when the news reached him about bin Laden's death. Like John Ottrando, he said his first thoughts were about the victims. He said he wondered about the contribution that these 3,000 dead people might have made to the life of the city. It was something, he said, that he asked himself almost every day.

Bloomberg's speech was followed by comments from the police and fire chiefs, who advised their fellow citizens to remain vigilant due to the heightened risk of revenge attacks. Although he usually prefers to ignore all the warnings, even Ottrando is now counting on the worst again. He liked Bloomberg's speech, especially the passages about New York's strength and one-of-a-kind spirit.

Sept. 11 has inscribed itself into the streets and skyscraper facades as a weighty past that refuses to be wiped away, that survives in the memories of many, in images, stories, anniversaries and even in constant quarreling.

Indeed, it took quite a while before it was finally decided that Ground Zero would even be built upon at all. There were long delays before investors could be found who had faith in the project. And the question of whether a Muslim cultural center and a mosque should be allowed to move to near the new World Trade Center triggered divisions in America that made it all the way to Congress and the White House.

For years, the victims of the terrorist attack and relatives of the killed have been complaining about a lack of solidarity. Ottrando says that many promises have been unmet, such as the one to outfit the police and fire departments with the latest equipment. The memorial at the scene of the disaster, which was originally the primary concern of any new development, has lost a significant amount of focus as the planning has moved forward.

In fact, the city is having a harder time coping with Sept. 11 that it might let on. People tend to be less forthcoming than Ottrando, who is bravely open about his conflicted feelings. "I get scared driving sometimes, I just do," he says. "But it always goes away. If I hear a loud noise, I feel alarmed. Those kinds of things."

These kinds of things have been part of life in New York for almost 10 years, since the attack that came out of the blue. Despite its relentless energy and round-the-clock activity, people still talk about a wounded city. Like many European cities, it has become a place full of insidious phantom pains.

Whenever possible, Ottrando has avoided the crowds and traffic congestion that develop around the massive construction site that was once Ground Zero and will forever remain a graveyard.

A Fireman in New York

He particularly avoids it these days. Since the news of bin Laden's death, dozens of camera teams have been clogging up the streets surrounding Ground Zero to film events there being followed around the world, such as Obama's speech. Ottrando slowly lets out his breath through pursed lips. It all seems like a circus to him.

Ottrando says his life is now focused on his sons, who are now 16 and 19, rather than six and nine as they were on 9/11. When the reports about Osama's death arrived, the older son called home and asked his dad how he was doing. Ottrando answered that he was OK in a halting voice while trying to hide the fact that he was crying.

Five minutes later, the boy called back and asked whether everything was really OK. "He was worried," Ottrando says. He adds that he is proud of his sons, noting how the younger one is doing well in school and might be able to go to college. The older one recently announced that he wants to become a fireman -- but only in New York City.