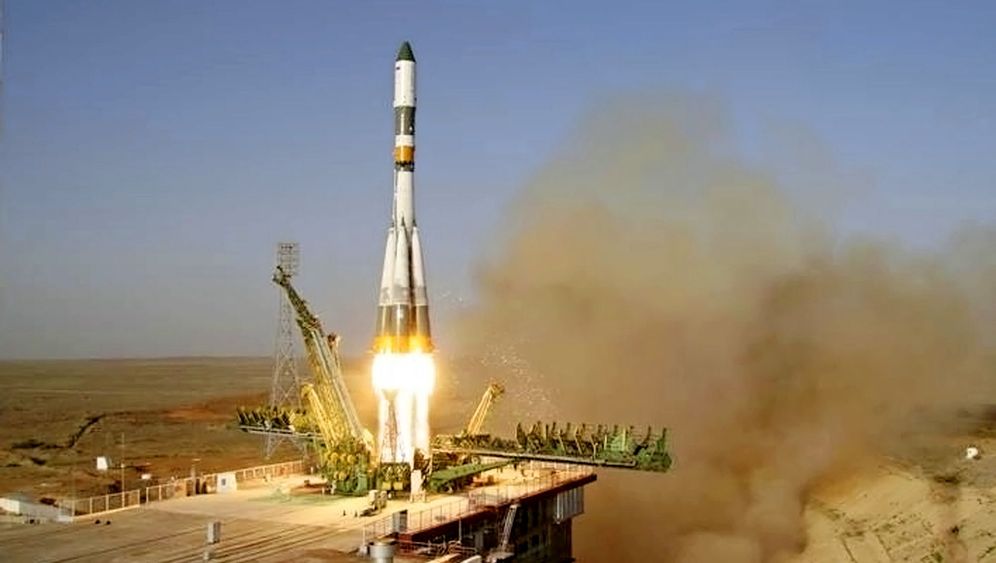 The people in the Altai Mountains of Siberia are regarded as frugal and tough. In late summer, many live from harvesting berries and cedar nuts.

They are also used to having burned-out rocket stages crash in the wilderness after spacecraft launches. When, in the middle of last week, a large ball of fire was seen in the sky above the taiga, residents of the village of Karakoksha were not alarmed. "I was at home when I felt the tremors," said Yelena, a 26-year-old local woman with a dark ponytail. She heard a rumble and went to sleep.

In truth, Yelena had witnessed a debacle. After a malfunction, a Russian Soyuz rocket had crashed along with an unmanned cargo spacecraft named Progress. The explosion was heard even 100 kilometers (62 miles) away, the government newspaper Rossiyskaya Gazeta noted with irritation.

The accident has shattered public confidence in the aging Russian technology, which is crucial to the future of manned spaceflight. The mishap could hardly have happened at a worse time. In July, NASA mothballed its decrepit space shuttle fleet. Since then, Russia has been the only country that has the ability to regularly put humans into space. Permanent operation of the International Space Station (ISS) is now impossible without the Soyuz rocket, which went into service in its current form in 1973 and had previously been the most reliable rocket of all time.

Western space agencies are concerned about the development. "Of course it really worries us when a rocket that has functioned so reliably for decades suddenly has an unsuccessful launch," said Thomas Reiter, director of human spaceflight at the European Space Agency, in a SPIEGEL interview.

Publicly, the Russian space agency Roscosmos is insisting that it wants to meet all its ISS obligations "unconditionally." On Monday, however, the head of Roscosmos's manned space operations, Alexei Krasnov, was quoted as saying that the launch of a Soyuz rocket with a three-person crew to the space station, planned for Sept. 22, would be delayed until the end of October or early November. Moscow wants to first launch an unmanned test flight as a precaution. Only after that will a commission decide when manned missions can be resumed.

The return of three astronauts from the ISS is also being postponed from Sept. 8 by about a week. ASA's space station program manager, Mike Suffredini, told reporters on Monday that the ISS may even need to be temporarily abandoned after the other three astronauts on the space station return to Earth in mid-November.

The problems with the nearly 40-year-old Soyuz rocket are casting a shadow over Russia's ambitious space plans. The Kremlin has dreamed for years of carrying out a manned mission to Mars. Russian scientists are working on developing a new type of nuclear propulsion to that end. Russian experts want to start constructing a permanent base on the moon in 2035, with the eventual aim of extracting natural resources from the Earth's satellite.

But a series of mishaps over the past few months has shaken the self-confidence of the spacefaring nation. The Soyuz crash is already the fourth prestigious mission to have failed. Roscosmos has problems with quality management and with quality controls of components.

A Proton-M rocket crashed into the sea because "some idiot" had filled the tank too full, according to a Roscosmos source. Then the control software in a Rokot rocket, made by the Ukrainian supplier Hartron, failed. A few days before the Soyuz accident, Moscow even had to request American assistance in the search for the telecommunications satellite Express AM4, which had gone missing after being launched into orbit.

Russia's space industry is now paying the price for failed reforms carried out in the 1990s. At the time, a whole generation of young experts either went to work abroad or switched to other professions. If they had stayed, they would now be at the peak of their careers. On top of that, the equipment at the plants that manufacture the rockets is hopelessly outdated.

At the Energomash factory site on the outskirts of Moscow, signs of progress and decline are close together. The FSB, Russia's domestic intelligence agency, intensively screens the company's foreign guests before a visit, a process that usually takes several months. More than 5,000 employees work here building the RD-180 rocket engine, a Russian export success in the space industry.

The engine, which is 3.5 meters (11.5 feet) high and weighs over five tons, is a modernized version of a rocket engine from the 1970s. It is considered so reliable that the Americans even buy it to use with their Atlas rockets.

Since 2001, Energomash has increased the price of the engine from $4 million (€2.8 million) to $12 million. Energomash is an important company for Russia, which wants to diversify its exports to include more than just oil and gas. Inside the factory building, heroes of the socialist past are depicted in colorful murals on the walls, including an image of a young Yuri Gagarin, the pioneering Soviet cosmonaut.

But the present looks less promising. The average age of the blue coverall-wearing men and women who assemble the engines is over 50. An Energomash engineer earns the equivalent of €1,000 per month. In the cosmopolitan city of Moscow, "only pensioners" would work for such a pittance, scoffs rocket expert Viktor Myasnikov.

It's the same story across the country, with the average age of all industry managers being around a half a century. When it comes to scientific staff, the average age is an elderly 63.

Sloppy work is also a problem. When in December, the incorrectly fueled Proton-M rocket crashed into the Pacific, sinking three navigation satellites, it turned out that Roscosmos had not adequately insured the cargo, which was worth over €50 million. An investigation revealed that the rocket's defective stage had not been properly tested.

Russian President Dmitry Medvedev, who likes to praise Russia as the "number 1" in terms of space launches, responded by making an example of two high-ranking individuals in the space industry. First he dismissed the chief designer at the spacecraft manufacturer Energiya. Then he also fired the head of Roscosmos.

Not everyone is convinced by such moves, however. "Saber-rattling does not work", says Konstantin Kreydenko of the specialist journal Glonass Bulletin. "If we fire our current rocket specialists, we won't find any new ones."