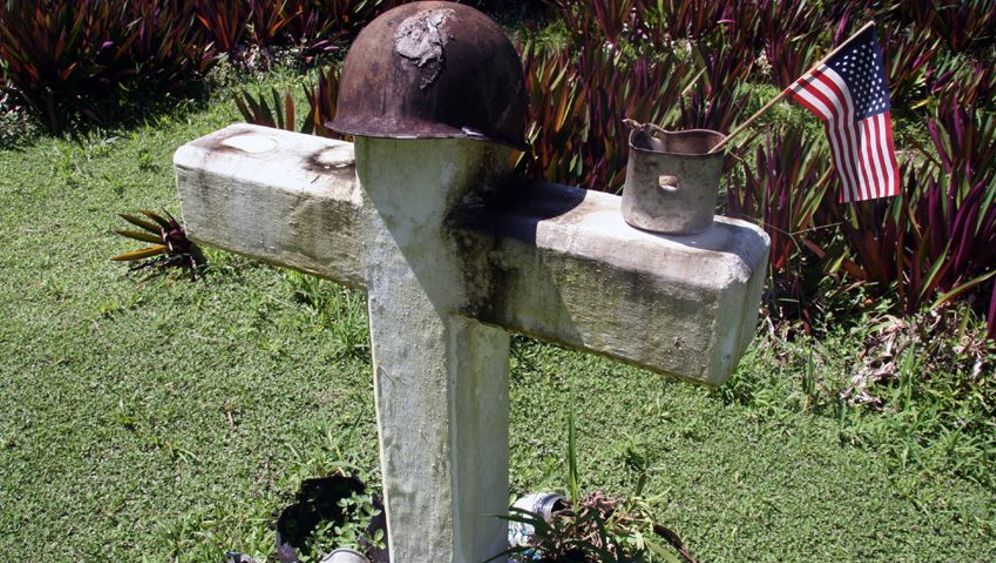 Visitors to the Pacific island of Peleliu can't claim they weren't warned. The sign at the harbour says "Welcome to Peleliu -- Land of Enchantment," but as the boat approaches the quay, a second sign becomes visible. "Remember that WWII ordnance is still dangerous and can injure or kill!"

The water glistens in varying shades of turquoise, the sand on the beaches is as fine as dust and a balmy breeze eases the tropical heat. But the beauty is deceptive. The "Land of Enchantment," which belongs to the island nation of Palau, was the scene of one of the bloodiest battles in the Pacific during World War II. Rusty grenades and rifles still lie strewn across the island. Wrecked warplanes and tanks lurk in the lush green vegetation. No one moved them after the firing ceased. Much of the battle debris remains lethal.

"The Americans landed here on Orange Beach on Sept. 15, 1944," says Des Matsutaro. The 36-year-old guide fetched the group of tourists at the quayside and took them to the beach. His company Peleliu Adventures offers World War II tours. He reassures visitors that they're safe if they stay close to him.

Matsutaro points out to the ocean and shows a black-and-white photo of the beach covered in thick smoke and with amphibious vehicles approaching the shore. "The Americans were caught in heavy Japanese crossfire," he explains. "The battle for Peleliu was only meant to take a few days but the fighting went on for almost three months."

In the end, the Americans won. A total of 10,700 Japanese soldiers and 2,300 US Marines were killed in the battle for this tropical speck of land. Estimates vary slightly. The island was a strategic target because of its airstrip.

Matsutaro's group isn't alone. Several Japanese people are here too. An elderly man with a hearing aid is filling sand into a plastic bottle with trembling hands. A woman wearing a large sun hat is squatting in the shadow of a palm tree, staring out to sea. American veterans and their descendants come here too, to attend memorial services, for example.

Back on the main road, Matsutaro hits the brakes. "Everyone out," he says. The tarmac is lined with bushes. The guide disappears through a gap. The group follows him to a heap of rusting metal 5 metres (16 feet) from the road. The remains of a cockpit can be seen, along with the undercarriage and red paint on the fuselage. The old warplane isn't dangerous, but the munitions lying all around it are.

"Now after almost 60 years, the safety mechanisms are slowly rusting away," warns Steve Ballanger. The former British soldier runs a munitions disposal team called Cleared Ground Demining which is hard at work on Peleliu. Since the end of 2009, the team has removed some 6,500 guns and other ordnance -- 9 tons in total. Ballanger warns tourists not to go roaming around the jungle.

A cleared path leads 300 metres through Death Valley onto Bloody Nose Ridge which saw the heaviest casualties. On the hill, a member of Ballanger's team, an American called David McQuillen, says: "My uncle died right here in a mortar attack." He said he decided to join the team in memory of his uncle.

For the islanders, World War II is a distant, abstract event that happened three generations ago. There are barely any eyewitnesses left here. For McQuillen, that gives the battle debris even greater significance. "When I'm on Peleliu, I feel the war. It's impossible to understand the battle unless you've been to this jungle," he says.

The islanders were evacuated before the battle and didn't recognize their homeland when they returned. The vegetation was burnt to the ground, their villages razed. "The US Navy distributed sunglasses because the naked chalk rocks reflected the light so brightly," says former Marine McQuillen.

The returning islanders, most of them fishermen, were fed canned tuna fish and meat. It took them a long time to resume agriculture. Because the fighting had removed all the signs and land demarcations, it was unclear who owned what, and land ownership disputes continue to this day.

At first, the islanders sold war relics for scrap. Engines and aircraft parts were stripped down, mixed with concrete and used to construct a quay wall. And before it was made illegal to take artifacts off the island, Japanese and American tourists left with all kinds of items in their luggage. Some residents decorated their homes with old war equipment.

Today, the focus isn't just on making the island safe for its 500 inhabitants and the vsitors, or about showing off overgrown tanks as tourist attractions. The authorities want to preserve Peleliu as a memorial and an open-air museum. And gradually, younger generations are starting to show more interest in the island's history, says McQuillen, who volunteers at a local primary school.

Matsutaro has brought his tour group back safely to the quayside. The team of Clear Ground Demining has come along and waves while the group departs. As the palm trees recede into the distance and swarms of flying fish leap along the boat, it seems that this tropical island really is enchanted.

But the snow-white beaches and the glorious sunset can't hide the horrors of its past.