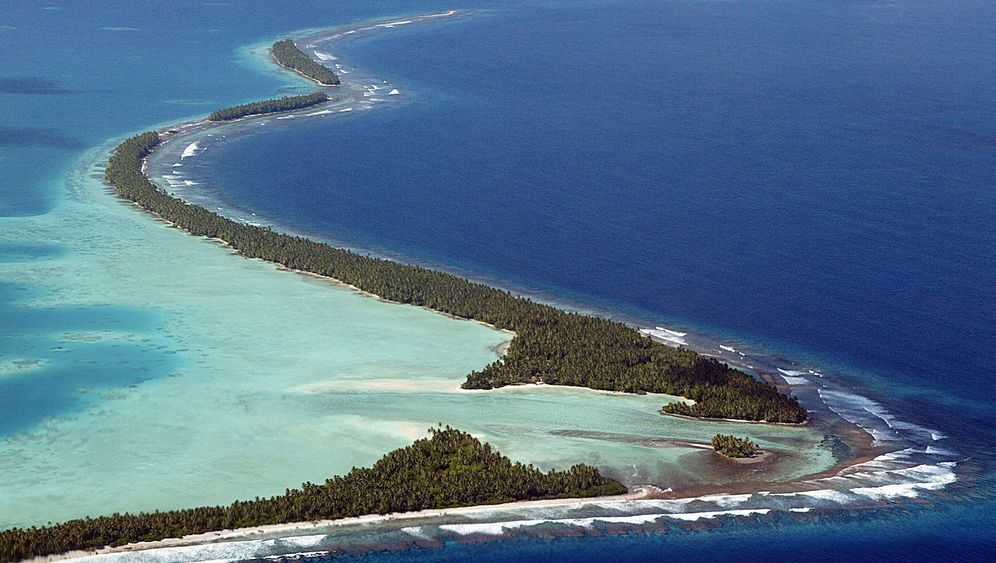 A survey released on the eve of the global climate change conference currently underway in Paris concluded that Pacific Island nations are among "the most vulnerable countries in the world, where people are already experiencing devastating climate change impacts, such as higher intensity storms, sea level rise, saltwater intrusion and drought." One of the islands featured in the survey, conducted by the United Nations University Institute, is Tuvalu, an atoll located between Australia and Hawaii. There, 70 percent of households reported they would migrate if climate stressors worsened in the years ahead. The survey also found that 15 percent of the population of Tuvalu, a country with just over 10,000 residents, has already left in the last 10 years. "Pacific islanders are facing the brunt of climate change impacts and are increasingly finding themselves with few options," Tuvalu Prime Minister Enele Sopoaga said.

In an interview with SPIEGEL ONLINE conducted on the sidelines of the conference, Sopoaga, 59, discusses his battle in Paris for the survival of his island nation and his expectations of European leaders.

SPIEGEL ONLINE: Mr. Sopaoga, you gave a very emotional speech at the opening of the UN Climate Summit in Paris last week.

Sopoaga: Tuvalu's future at current levels of global warming is already bleak. Any further temperature increase will spell its total demise. No leader at this summit is carrying this level of worry and responsibility. I told the audience: Just imagine if you were in my shoes. What would you do? We want to assure that our children and our grandchildren have a future.

SPIEGEL ONLINE: You have been at the climate summit from the very beginning and are staying until it ends on Friday or Saturday. That's more time than almost any other world leader. What do you think the result of this climate summit will be?

Sopoaga: We have been engaging in this process for many years, since 1992 in Rio. All this time we've been beating the same drum and singing the same tune in the hope that the countries that are bigger and have more resources and greater capacities will have the sympathy to join in our chorus. But it appears to me there still denial of the urgent necessity to act. Sometimes I wonder if there is really goodwill in the world to worry about saving human beings, or whether we are just using that as camouflage for our own interests, the self-centered drive for more profits.

SPIEGEL ONLINE: What is it that upsets you so much?

Sopoaga: Some meetings leave you feeling disappointed and discouraged. At the Green Climate Fund meeting at the beginning of this summit, for example, people seemed unwilling to accept everything that we are already doing. They seem to be forgetting that the people living on atolls like Tuvalu are among the world's most threatened populations.

Sopoaga: They say we need to improve our data and to prove that the erosion, flooding and damage to food crops caused by cyclone Pam, which devastated our island in March, was in fact the result of climate change. But it's unfair to throw the onus of having to justify things scientifically back on the very small islands that are the most vulnerable. After all, it was the larger countries that created these problems. This all leaves me wondering if there is true understanding or appreciation in the world for the plight faced by Tuvalu. This is really shameful. Our contribution to greenhouse gases is negligible and yet we are being held responsible for the consequences and the changes that need to be made by other societies. We are already spending money on this -- its part of our national budget. At the same time, we have also been doing our part at the community level, even in our villages. Ultimately, however, we are being forced to spend money to adapt to something that has been caused by other people -- through over-consumption and over-industrialization.

SPIEGEL ONLINE: Have the industrialized nations at least recognized the grave situation in which Tuvalu finds itself?

Sopoaga: Our survival as a nation is dependent on the decisions made at this conference. This is not simply a stepping stone toward a better future. We are standing at the edge of the cliff.

Sopoaga: Either we stand united and agree to combat climate change or we will all stumble and fall and condemn humanity to a tragic future.

SPIEGEL ONLINE: But the majority still seems to have trouble taking your demands into consideration.

Sopoaga: What's that all about? Does the world want us to resettle? Some say it would be cheapest to evacuate us. But it would be a disgrace if that were the world's aim.

SPIEGEL ONLINE: Do you consider the goal of limiting global warming to an increase of 2 degrees Celsius (3.6 degrees Fahrenheit) to be achievable?

Sopoaga: Two degrees? We can't accept even a 2 degree-increase in temperatures. I firmly believe, based on the science that we know from the Intergovernmental Panel on Climate Change (IPCC), that we cannot go above a 1.5 degree Celsius temperature increase. If we allow a 2 degree increase, then we will soon be at 3 degrees. This would spell catastrophe for the island countries. Let's keep in mind that this limit is not just in the interest of island nations -- it is also that of all of humanity.

SPIEGEL ONLINE: How many residents have already left Tuvalu?

Sopoaga: Around 4,000 people have already left. Today they live in Australia, New Zealand and Fiji. Relocation is not an option, but I want to make it very clear that I am also not stopping people from moving. I know that some are choosing to go on their own -- and it is their own decision.

SPIEGEL ONLINE: Are you considering the possibility of evacuating the island?

Sopoaga: No, if we run away, it is almost like giving up the battle. The world must work together and say, look, we can't force people out of their own islands. We must do something to mitigate and cut down emissions, but also to finance adaptation to the effects of climate change. We are very grateful to those who have helped us -- neighbors like New Zealand, Australia and Japan.

Sopoaga: With money and projects.

Sopoaga: I didn't meet Obama. But he had several representatives meet with our alliance of island nations. I did speak with UN Secretary-General Ban Ki-moon. I also met German Chancellor Angela Merkel. I spoke with her for about three minutes before we came into the opening session. I said, Ms. Chancellor, I just want to meet you and to say that you are the strongest European leader on climate change. Please, let's work together to achieve lower than 1.5 degrees, because anything above that will spell the disappearance of island countries, including my own. She said, "Yes, I fully recognize that. I fully agree." In her statement, she didn't mention 1.5 degrees, but she did recognize that the catastrophe does have serious consequences for small island developing states.

SPIEGEL ONLINE: What do you expect from Europe?

Sopoaga: I hope that Merkel will also talk to her European Union colleagues about this because we really need the EU leaders to stand with us. We are facing a lot of pressure, even from our neighboring states, including Australia and New Zealand. I am very disappointed, but we cannot give up. This is a global challenge that requires a global response. The United States, Australia and New Zealand must do more. I also want to encourage the European leaders to stand together to save the planet.

SPIEGEL ONLINE: Which extreme weather events are most dangerous for Tuvalu -- rising sea levels or cyclones?

Sopoaga: Rising sea levels are just as dangerous for us as the increasing number of cyclones. We have now installed an early-warning system with foreign assistance, which we very much welcome. But if you live on an atoll and you get a warning by radio that a big wave is coming and everyone is told to move to higher ground, where are you supposed to go on these islands? There is none. The highest ground is four-meters (around 13 feet) above sea level, meaning you'd be safer in a coconut tree. How, though, are you supposed to get your grandfather, grandmother and grandchildren up there? I hope the whole world will now finally come to understand this.

Enele Sopoaga, 59, has served as prime minister of Tuvalu since 2013.