The political drama playing out in Pakistan this week took another twist Tuesday when the country's high court ordered the arrest of Pakistani Prime Minister Raja Pervez Ashraf on suspicions of corruption and nepotism. The suspicions have followed Ashraf for years, but the timing of the announcement now threatens to light a match on the country's smoldering political crisis.

Since Sunday self proclaimed revolutionary leader Muhammad Tahir-ul-Qadri has been leading a protest march calling for the ouster of Pakistani President Asif Ali Zadari. Qadri, a moderate clergyman who has denounced corruption among the political class, has seen a meteoric rise to popularity over the last months.

On Tuesday, hundreds of thousands of demonstrators joined his protest and packed Islamabad's streets. The court's announcement came in the middle of Qadri's speech on Tuesday and the crowd broke out in cheers at the news. On Wednesday, Qadri once again called for the end of the government. "If these thieves hadn't ruled Pakistan, today every child in the country would have a smile on their face," he shouted to his followers.

Meanwhile the country's normally meddlesome military has been strangely silent in the midst of chaos. That silence has led some observers to believe that the country's generals are behind Qadri's campaign.

The turmoil comes just weeks before Pakistan's government was set to complete its five year term, a milestone in a country that normally experiences volatile shifts of power. At the same time violence has been growing with extremists attacking the government and religious minorities.

On Wednesday German commentators said that they don't dispute the claims of Qadri's campaign, but that the current political chaos threatens to further destabilize Pakistan's already shaky democratic institutions.

"It says a lot about the government in Islamabad (and the general condition of Pakistan) that its biggest achievement could be that it would be the first government in the history of the country that remains in power for an entire legislative period. It remains to be seen whether the new convulsions actually break its will to survive. It wouldn't be a shame to lose President Asif Ali Zadari and his team, but it would be fatal if the establishment was unable to set in motion an orderly transition and new elections."

"The Pakistani people rely more on personal relationships than on the institutions of their country…. Pakistan not only needs a new government, but also a new political culture. The country is mired in a swamp of violence, injustice, corruption and political hypocrisy. A halfway democratic political reboot would not be a bad start."

"One need not have sympathy for the plight of the current government in Pakistan…. The traditional weaknesses of the country's democratic institutions are once again on display. In principal, the court is right to act on the corruption allegations. But the moment chosen is fatal, because a moderate clergyman, probably with enthusiastic military support, has been catapulted to revolutionary status and could bring about the fall of Zadari's leadership with help from the street."

"The clergyman has many followers and he says the right things: he castigates corruption and pillories Pakistan's democracy as a system that only benefits a small portion of the populace. But he's chosen the wrong solution by calling for more power for the army."

"Pakistani generals believe that the country's politicians put their own personal ambitions over the well being of the nation, as they define it. A belief that is not entirely untrue. The military, however, is overlooking the fact that it too has failed in the fight against violent extremism. One could view the current conflict between politicians, judges and armed forces as the growing pains of democracy. After decades of military dictatorships and governments that are obedient to the generals, it is high time that Pakistan finds an urgent and necessary balance among its institutions." 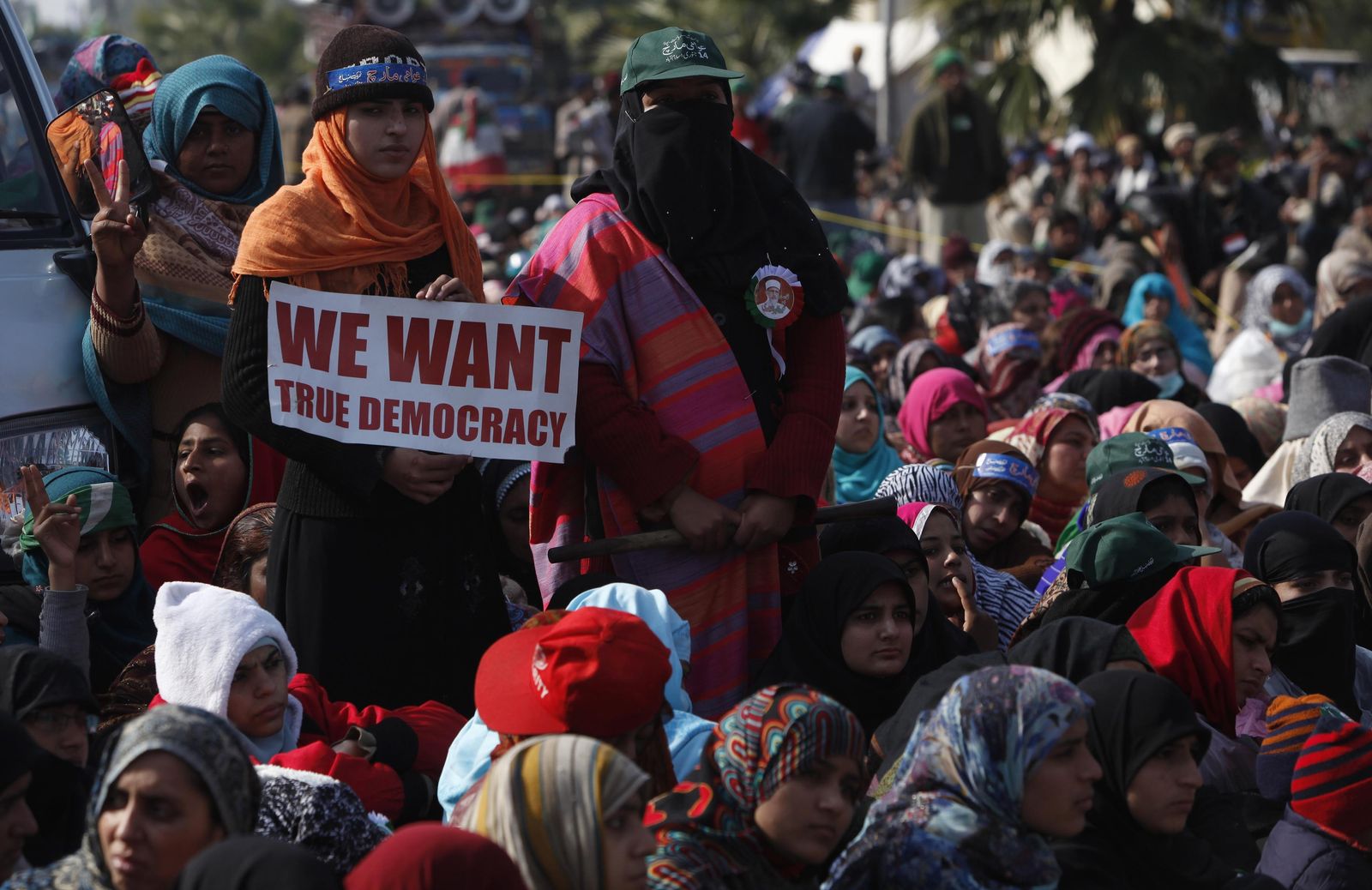 Supporters of cleric Muhammad Tahir-ul-Qadri protesting against the government on Tuesday.