A new war appears to be brewing between the two nuclear powers Pakistan and India. The Pakistanis claim that Indian fighter jets are invading their air space, while normally moderate experts are going on television to demand "revenge" for "false accusations" coming from New Delhi. In Muzaffarabad, the capital of Pakistani-administered Kashmir, angry Islamists with long beards and floor-length robes are demonstrating in the streets, raising their fists against both their enemies in India and their own government, and swearing revenge for the government's banning of their Islamic charity, which is suspected of having ties to terrorism. 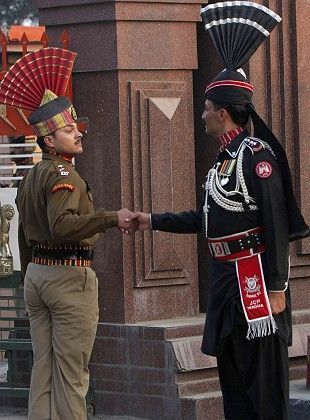 Pakistani (r) and Indian border guards shake hands during the "Beating the Retreat" ceremony at the India and Pakistan joint border.

The 57-year-old general, sitting in his third-floor office in Islamabad, is a short, wiry man with carefully parted hair. He smiles. Instead of a military uniform, the commander of Pakistan's notorious military intelligence agency, Inter-Services Intelligence (ISI), is wearing a gray suit and a stylish pink tie, his elbows resting comfortably on a large, walnut desk.

If anyone in Pakistan knows how close the country currently stands to a military conflict with India, it is Lieutenant General Ahmed Shujaa Pasha. "There will not be a war," he says confidently. "We are distancing ourselves from conflict with India, both now and in general."

His words sound promising, and his sentences are unusually calm for a senior military official speaking in the tense aftermath of the terrorist attacks in Mumbai. They stand in stark contrast to the views of most of his officers, who are itching to shift their command posts to the country's eastern border with India as quickly as possibly, so as to exact vengeance for public insults doled out by the Indians.

It would also provide them with an opportunity to ease up on the unpopular front against the Taliban and their allies in Pakistan's western tribal regions. Many Pakistani military officers do not see the Taliban as their enemy, but rather as a group that secretly promotes Pakistan's interests in its resistance against Kabul and the United States. India, on the other hand, has already been Pakistan's enemy in three wars.

Pasha says that he too has "questions." So far, he says, the Indians have failed to provide evidence to support their claims that Pakistani groups sponsored by the ISI were behind the Mumbai attacks. "They have given us nothing, no numbers, no connections, no names. This is regrettable." Pasha insists that he was willing to travel to New Delhi to help in the investigation.

If he had done so, Pasha would have been the first director general of the ISI to travel to India, a visit that would have been a minor sensation. Instead, he stayed at home, yielding to the pressure of old antipathies. "Many people here are simply not ready," he says.

He pauses for a moment. "At first we thought there would be a military reaction. The Indians, after the attacks, were deeply offended and furious, but they are also clever," he explains. The general presses his hands together and leans forward to give emphasis to his words. "We may be crazy in Pakistan, but not completely out of our minds. We know full well that terror is our enemy, not India."

Pasha has commanded the ISI for the past three months. Before that, he was the general in charge of operations against militant extremists in the tribal regions bordering Afghanistan. The agency he now heads has been likened to a black box containing secrets with which not even the civilian government in Islamabad is entrusted.

Capable of Anything at Home and Abroad

The ISI is believed to have rigged elections and toppled governments, and is even suspected of involvement in the elimination of politicians that had fallen out of favor. With its decades-long history of double-dealing and intrigues, the ISI is now believed to be capable of just about anything, both at home and abroad. 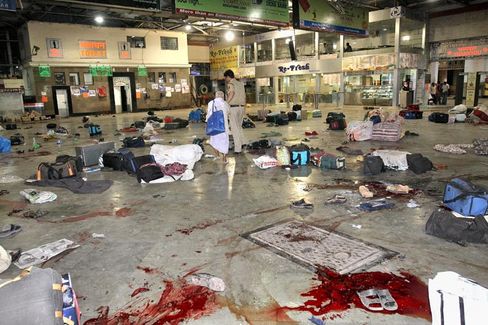 The Mumbai attacks of November 2008.

Pasha says that he wants to reestablish credibility for his agency. The shutting down of the so-called political wing, whose activities included spying on key policymakers, is seen in part as the military's concession to the country's new civilian government. But Prime Minister Yousuf Raza Gilani experienced the limits of the ISI's goodwill in the summer, when he announced his intention to place the agency under the control of the interior minister. Gilani quickly cancelled his plans after receiving a call from the powerful chief of Pakistan's military, General Ashfaq Pervez Kayani.

General Pasha orders tea served in white English porcelain cups. With its expensive wooden furniture, elegant armchairs and giant flat-screen TV, his office looks more like the conference room in an American five-star hotel than the command center of an intelligence agency.

Pasha switches back and forth between English and his surprisingly accent-free German. He lived in Germany for a few years in the 1980s, taking part in officer training programs.

"It is completely clear to the army chief and I that this government must succeed. Otherwise we will have a lot of problems in this country," he says solemnly, placing his hands next to each other on the desk. "The result would be problems in the west and the east, political destabilization and trouble with America," he continues, wrinkling his brow. "Anyone who does not support this democratic government today simply does not understand the current situation." As if making a confession, he adds: "I report regularly to the president and take orders from him."

But how much control does Pasha have over his own organization? Many officers, who grew up with rising Islamic fundamentalism and the concept of India as an enemy, are opposed to the new course taken by President Asif Ali Zardari, the widower of former Prime Minister Benazir Bhutto. They see the war against terrorism as the Americans' war, not theirs. "Many may think in a different direction, and everyone is allowed to think differently, but no one can dare to disobey a command or even do something that was not ordered," the general says quietly.

Pasha appears on the far right in a photograph that went around the world. Standing next to him is army chief Kayani. In the photo both men, together with senior US military commanders, are standing on the US aircraft carrier "Abraham Lincoln." The meeting took place in late August, and the Americans allegedly reached an agreement with the Pakistanis that they would be allowed to fight the leadership of the terrorist network in the tribal regions with armed drones, while Islamabad would put on a show of protesting loudly against the violation of Pakistan's sovereignty. 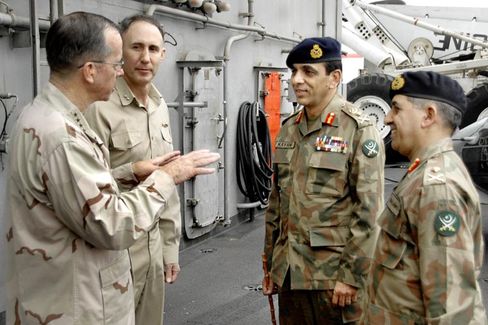 The general denies that this was the case. "We never discussed that, nor did we agree to it," he explains, shaking his head. "But to be honest, what can we do against the drone attacks? Should we fight the Americans or attack an Afghan post, because that's where the drones are coming from? Can we win this? Does it benefit Pakistan?"

A major is standing in the doorway, indicating to Pasha that he is running out of time. The general glances at his watch and motions to the major that he will need another five minutes.

Before Pasha's appointment, relations between the American and the Pakistanis had reached a low point. At that time, the ISI was still headed by a close associate of former President Pervez Musharraf, General Nadeem Taj. The US Central Intelligence Agency (CIA) presented Islamabad with a dossier describing close contacts between ISI agents and the Taliban and radical insurgency leaders like the Haqqani clan, as well as warning against US attacks.

In the past seven years, the Americans have given the Pakistanis about $11 billion (€8 billion) in return for their support in the war against terror. The US military depends heavily on sources provided by the ISI, which, in addition to its estimated 10,000 regular employees, maintains a vast network of spies and informants. After the new regime had come into power, everyone approved of the cosmopolitan Pasha, who recently convinced tribal elders in the Bajaur border region to organize so-called Lashkars, or armed tribal militias, against the extremists.

Shortly after assuming his new position, the three-star general traveled to the United States to meet with his counterparts there. But first he visited Amrullah Saleh, the Afghan intelligence chief, who told SPIEGEL a few months ago that he had "piles and piles of evidence" that Pakistan's intelligence agency is behind the insurgency in his country. The meeting lasted more than four hours, and when it ended Saleh had accepted an invitation to Islamabad.

Pasha is apparently adept at overcoming old divisions. However, it is worth listening closely when the general explains why he too is unwilling to apprehend the Taliban leadership, even though many claim that Taliban leader Mullah Omar, for example, is in Quetta, a city where Pasha lived until a few years ago. "Shouldn't they be allowed to think and say what they please? They believe that jihad is their obligation. Isn't that freedom of opinion?" he asks, defending extremist rabble-rousers, who are sending more and more Koran school students to Afghanistan to fight in the war there.

Such words from Pasha arouse the old suspicion that the ISI is playing a double game.

The major is standing in the doorway again, but this time he won't back down. Pasha stands up and smoothes his gray suit. What will the solution look like for this region, which threatens to descend into chaos? He believes strongly in the West's coalition with Pakistan, says Pasha, and is convinced that by working together, everyone will be able to defeat terror. But it will not, he adds, happen punctually and according to plan, as is customary in Germany. The general smiles politely, and then he closes the elevator door.