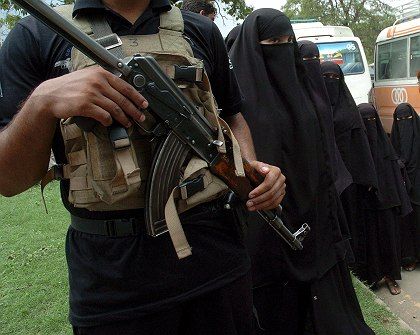 Pakistani female religious students after they surrendered to authorities outside the Red Mosque in Islamabad.

The simmering tensions between the radical Lal Masjid, or Red Mosque, and the authorities in the Pakistani capital Islamabad, finally boiled over this week. Pakistani forces have been laying siege to the mosque following violent street battles on Tuesday, and are trying to persuade the radical students inside to give up. Around 1,200 students and children decided to leave the building on Wednesday, but there are still hundreds inside, mostly women and girls. There are now concerns that some of the children are being kept there as human shields.

In an interview broadcast on state television Thursday, the mosque's head cleric, Abdul Aziz, who left the compound on Wednesday, said there were still 850 people in the building, 600 of whom were women and girls. He insisted the young girls were not being used as human shields, but had been persuaded to stay behind by female teachers at "a time of sacrifice." "We only give them passion for the jihad," he said.

However, Colonel Masha Allah of the paramilitary forces at the scene said that some of the children who had already left had said they had been locked in a room.

A 12-year-old girl, who left the mosque on Thursday, said there were between 35 and 40 students of her age still inside. And a young woman who also left Thursday told Reuters she had seen four bodies in the mosque, two of which were girls.

The siege began after running battles between the students and security forces on Tuesday, during which at least 16 people were killed. The battles are taking place in the center of Pakistan's administrative capital, a stone's throw from the government district and presidential palace.

On Thursday the security forces set off a series of eight explosions outside the Red Mosque before dawn in an attempt to persuade those still holed up there to surrender. Security forces said they had also fired a series of "warning blasts," at the mosque and broken open a door to the building. The students were then asked by loudspeaker to leave.

'We Are Not Terrorists'

The initial response was around 20 minutes of gunfire but by mid morning around 60 students had left the complex, which includes the mosque and an adjoining girls madrasa, or religious school.

Abdul Aziz said that 14 men in the mosque had Kalashnikovs, but he asked those still there to give up peacefully. He said "if they can get out quietly they should go, or they can surrender if they want to." Aziz was arrested Wednesday trying to flee the mosque in a woman's burqa. He was spotted by a female police officer because of his height and large stomach.

Aziz, who was still dressed in the burqa he had used as a disguise during his interview, denied that his movement had links with al-Qaida, though he said his mosque had a "relationship of love and affection with all jihadist organizations."

His brother, the mosque's deputy head cleric, Abdul Rashid Gazi, is still inside the building. Speaking to Reuters by telephone on Thursday he said "We are not criminals. We are not terrorists that we should surrender. ... We have said that we are ready for dialogue."

'They Only Want Martyrdom'

The Red Mosque has been in conflict with the Pakistani government for months. Its leaders want to establish an Islamic theocracy similar to the ousted Taliban regime in Afghanistan. President Pervez Musharraf, who is regarded as a close ally of the United States in the war on terror, is currently facing both a growing militant movement, primarily near the Afghan border, and a pro-democracy movement enraged at his attempt to fire the country's chief justice in March. Liberal politicians have pressed the president to crack down on the two brothers in charge of the mosque. Meanwhile, there are concerns abroad about a growing Taliban-like movement in Pakistan, a country with nuclear weapons.

While the Red Mosque has a long history of support for militancy, things really escalated in January of this year after female students occupied a library to protest the destruction of mosques illegally built on state land. The students at the school have since carried out a number of provocative acts, including kidnapping alleged prostitutes and police officers as part of an anti-vice campaign.

A security official told Reuters that a small hardcore in the mosque were unlikely to surrender. According to one student who had decided to leave the mosque, 15-year-old Maryam Qayyem, those who stayed inside "only want martyrdom."

"They are happy," she told the Associated Press Wednesday. "They dont want to go home."