When I got the chance to move to Islamabad in 2009 to do reporting there as a correspondent for SPIEGEL, I was thrilled. As a Pakistani-German, it gave me the opportunity to discover the country my family came from.

Compared with the big club of people of Pakistani origin in the United States or Britain, we Pakistani-Germans are a relatively tiny group. The German government estimates there are 80,000 people here of Pakistani origin, with around 50,000 holding German passports. Some of us were born in Germany; others recently settled here. However small, we are as diverse as the Pakistani population itself -- with people from all provinces. We are people of different beliefs, ranging from the deeply pious to the secular. Some drive taxis; others are doctors or shopkeepers.

Not all Pakistani-Germans living here can even identify with Pakistan. Many have never visited the country. Yet we all have one thing in common: The image we must endure of the country of our families' origin is a dark one. Pakistan is unfortunately associated with terror and the Taliban, bombs and blasts, doom and gloom. Even if we talk to people in Germany who have never been there, this is the image of Pakistan that constantly confronts us.

'Pakistan? To Hell with It!'

The fact that most Pakistani restaurant owners in Germany prefer to call their establishments "Indian restaurants" or give them fancy names that have no connection to their roots provides an inkling of just how battered Pakistan's reputation is. It's almost as if they were saying, "Pakistan? To hell with it! We want nothing to do with that."

With the exception of a year spent there during my childhood, I had not lived in Pakistan for any extended period of time before moving there for SPIEGEL. For me it was an exotic, far-away holiday destination -- also in the sense that none of my friends at school or their parents ever considered traveling there for their vacations. I did spend a few weeks in Karachi every now and then visiting relatives. I loved the mangos and the rides on rattling motorized rickshaws. Although I put up with hundreds of people pinching my cheeks, I could never stand the smell of raw sewage. It nauseated me.

The initial plan was for me to move to Delhi, India, where I would work as SPIEGEL's South Asia correspondent. I had reported from India before, but when I sought accreditation for the post, India refused without giving any explanation. For the first time, I personally felt what it means to have Pakistani roots. It becomes your defining aspect.

So Islamabad became the choice. And what a place: It was a city that had been planned and then not allowed to grow out of control -- lush and green, with beautiful hills and Bauhaus architecture. I soon realized I could mingle with people without them immediately recognizing that I was a foreigner. I could travel to places usually closed to Westerners. And once I polished the Urdu I learned in my childhood, I could also talk to people.

Are You a German or a Pakistani?

So was it easier for me to report from Pakistan than it would have been for other foreign correspondents who didn't have Pakistani roots? Sure. It certainly offered some advantages. At times, though, it also made things more difficult because the lines were never clearly drawn. Is this guy a Pakistani or a German? This question always lingered in people's minds, especially when it came to dealing with politicians. After reading my articles, they usually managed to convey to me a message: You need to be more Pakistani and more patriotic.

That often put me in a delicate position. As a journalist it is your job to be critical, but in Pakistan this can often be misinterpreted as being anti-Pakistan or unpatriotic, rather than as something that might contribute to improving the situation in the longer term. If it is constantly said in Islamabad that Pakistan's poor image abroad is the product of the foreign media, it makes reporting from the country very awkward.

It's also often a one-sided argument. Yes, it is very unfortunate that quite a number of journalists are sure to include the words "Taliban" and "terror" in their pieces on Pakistan, even if the subject of their reporting is cricket, literature or butterflies in Gilgit-Baltistan. To write about Pakistan without the Taliban and terror seems to be unthinkable for many reporters -- and what they often end up delivering is a black-and-white image of a very colorful and complex country.

At the same time, one cannot deny that Pakistan has a huge problem with extremism, intolerance toward minorities and, yes, terror. Some might be tempted to say the threat is exaggerated and doesn't really affect one's everyday life, but it does. It just becomes routine after a while. There are frequent checkpoints on roads. You have poorly disguised intelligence agents sitting in hotel lobbies and at crowded places killing time and watching out for anything suspicious. Even visiting a hotel requires an airport-style security check. There seem to be guns, guns and evermore guns at almost every corner.

This is anything but normal, but after a few years of living there, you start to suppress it. You learn not to see the guns. I readily went through all the scans and checks and questions. But when people admonished me not to exaggerate the role of terror, I felt confident in my mind that I had not. I knew all along that the country in which I was living in was either excessively secure or extremely dangerous.

Of course, there are other stories that can be reported in Pakistan that couldn't be any further removed from terrorism. Stories of everyday life -- something most of my readers in Germany have no clue about. About family life there, for example, about a very different understanding of time, slowness and speed. About the ways small family businesses manage to get by. I wrote a column about all this -- and it had a lot of readers and comments. It wasn't negative reporting, but it also wasn't PR for Pakistan. Of course, there were plenty of negative stories about things like "load shedding," as the disastrous lack of electricity is called, about the gas supply shortage, high inflation or the dearth of proper health care and education systems.

I wish I could have travelled more, but as a foreign journalist you need special permission to go to many places. It's called a "Non Objection Certificate," a term I first heard in Pakistan. I always asked myself: What is there to have objections about? What is there that needs to be hidden? "It's for your own security," I would be told. But I never believed it. What I saw instead was a lack of freedom to travel and report.

As a Pakistani-German, I have roots in the country. I like Pakistan. I brought my German wife there, and my child spent the first years of his life in Islamabad. If I hadn't liked Pakistan, I wouldn't have stayed on for four years. Still, things are heading in the wrong direction in the country. Rather than pointing fingers at others and blaming them for the country's ailing image abroad, people should be focused on seeking real solutions. The first step is to be critical and to honestly identify the country's problems. The second is to address them.

It will only be after that happens that Pakistani-Germans might be proud enough to call their establishments Pakistani restaurants.

Hasnain Kazim recently moved from Islamabad to Istanbul, where he continues to serve as a correspondent for SPIEGEL. Follow him on Facebook. 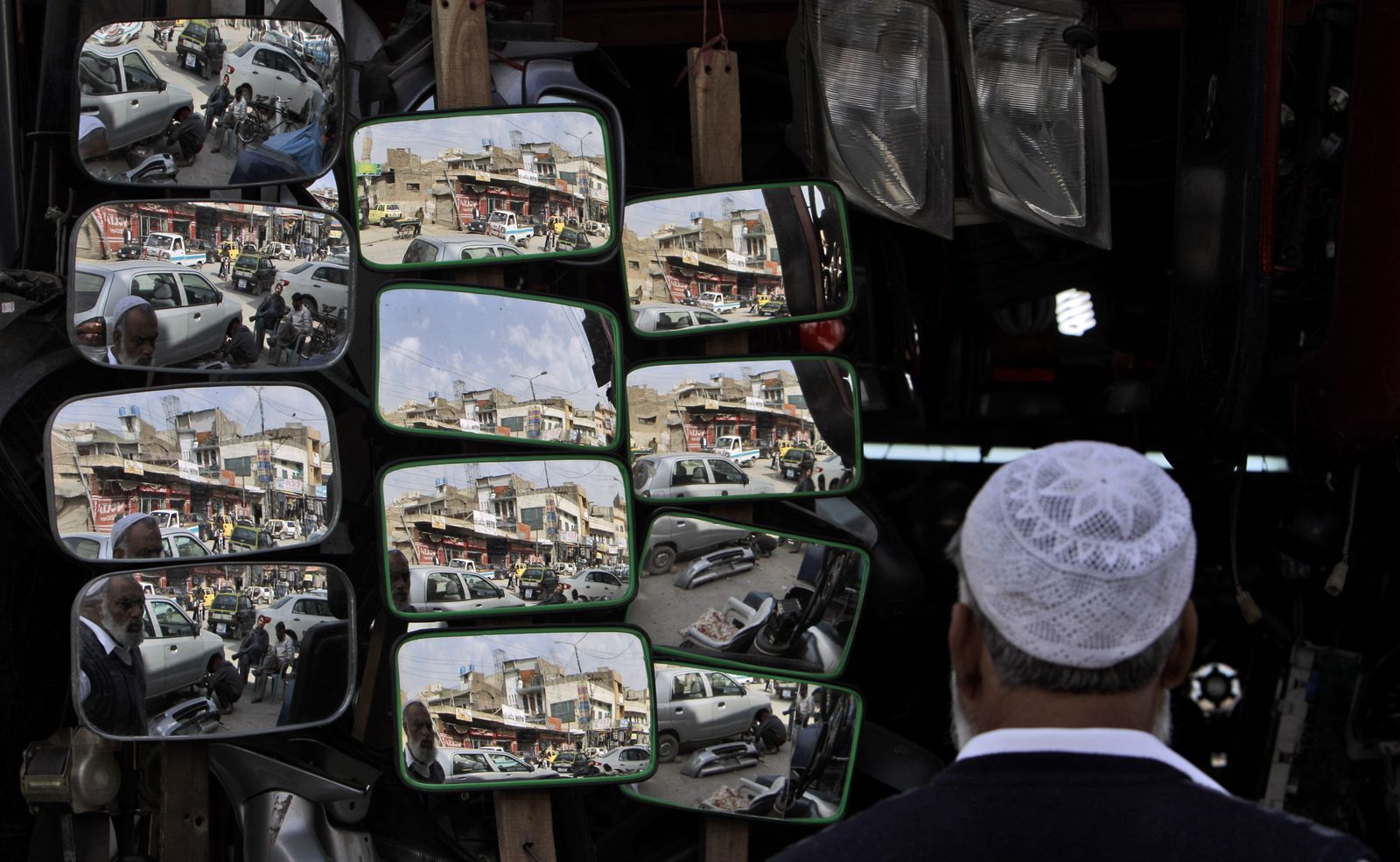 Mirrors on display at a shop in Rawalpindi, Pakistan.