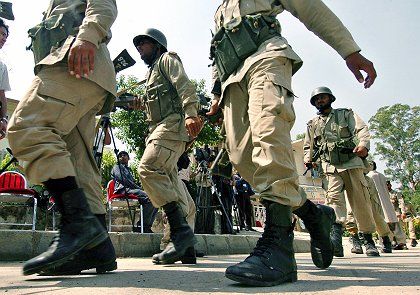 Pakistani paramilitary soldiers rush towards the Red Mosque in Islamabad, for a military assault.

The chief cleric at Islamabad's Red Mosque is reported to have been killed Tuesday as troops flushed out entrenched holdouts inside the adjoining women's religious school in room-by-room fighting, state-run television said. Pakistan Television quoted the Interior Ministry as saying that the radical cleric, Abdul Rashid Ghazi, was killed during the attack.

It is not yet clear exactly how Ghazi died. Security sources told the Associated Press that his body was found in the basement of the school. According to Agence France Presse, a spokesman for Pakistan's Interior Ministry said the cleric had been killed by his own supporters after he tried to surrender to soldiers.

Troops in the Pakistani capital Islamabad stormed the Red Mosque on Tuesday morning following a week-long siege. At least 60 militants are reported to have been killed during nine hours of fighting, as well as four soldiers. But the troops are still trying to root out a number of well-armed defenders who are thought to be holding a number of hostages.

The assault began after last-ditch attempts at negotiations with the militants broke down. Soldiers then stormed the mosque from three directions just before dawn, according to wire reports.

The mosque, situated near the government district, has been a hotbed of religious extremism for some time, and over the last six months students at a Koran school connected to the mosque have been trying to impose Taliban-style morality through kidnappings and threats.

Pakistani forces had been laying siege to the mosque following violent street battles last Tuesday and attacks on government institutions like the Environment Ministry. Around 1,200 students and children had decided to leave the building on Wednesday, but hundreds remained inside, mostly women and girls.

On Monday, President Pervez Musharraf sent in a team of negotiators led by former prime minister Chaudhry Shujaat Hussain, and including a delegation of Islamic clerics, to try to persuade the militants to surrender peacefully. But the talks failed, despite nine hours of negotiations conducted by mobile phone and loudspeakers. Minutes after the team left the mosque, gunfire and explosions could be heard as the troops went in.

Militants have mounted a last stand, shooting at the attacking soldiers with machine guns and rocket launchers from the mosque's minarets. Troops are now trying to flush out the remaining holdouts. The mosque's chief cleric, Abdul Rashid Ghazi, is reported to have barricaded himself in one of the adjoining madrassa's basements, using women and children as human shields. Soldiers are demanding that he surrender but he has said he would prefer to die. Speaking by phone to local station Geo TV, he said: "The government is using full force. This is naked aggression. My martyrdom is certain now."

The soldiers have now secured more than two-thirds of the sprawling Red Mosque complex. "There is still a significant area which has yet to be cleared," military spokesman Major General Waheed Arshad told reporters. "There is still resistance."

So far around 20 children, some no older than six or seven years old, and 50 women are reported to have been freed, but the militants are believed to still be holding around 150 hostages. Arshad said that fighting continued to be intense. "We are taking a step-by-step approach so there is no collateral damage," he said.