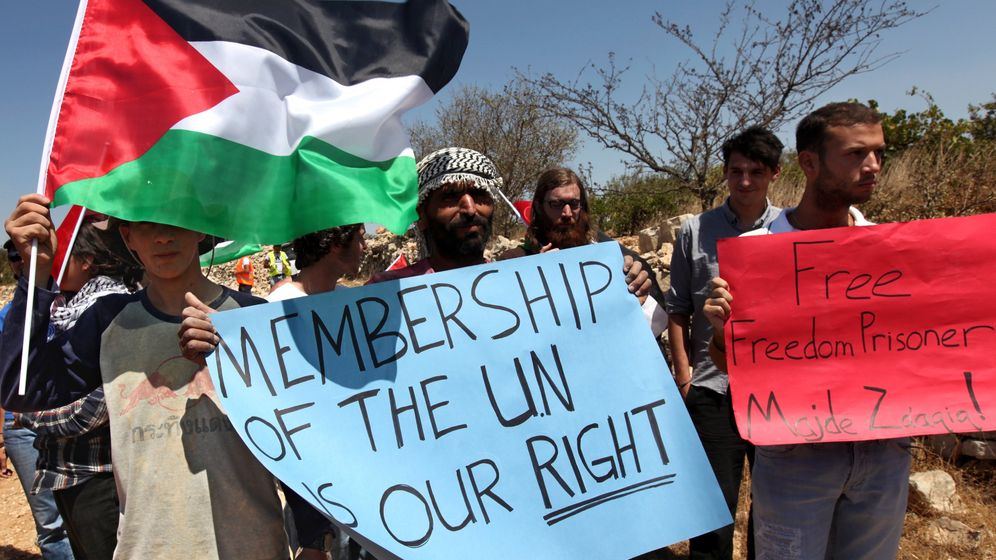 Someone who has toppled a pharaoh can wait -- even if it means waiting three solid hours until the guest arrives from Ankara to cut a ribbon and say a few friendly words in the garden of the Turkish Cultural Center in Cairo. "We need someone like him," says Beshoy Fayze, a young Copt with curly hair and stylish, white glasses.

Fayze was part of the revolution at Tahrir Square. He demonstrated until Hosni Mubarak fell. He captured every moment with his camera, and he was ultimately even forced to let himself be arrested. This has been his revolution. But, Fayze says, he would entrust it "to one like him," to a person like Turkish Prime Minister Recep Tayyip Erdogan.

Erdogan doesn't have the Che Guevara face that Egypt's young revolutionaries would like to print on T-shirts. But he's the best thing the country's political establishment currently has to offer. "No matter what, he doesn't let anyone tell him he can't protest against Israel," Fayze says. "He doesn't bow to anyone, not to the Americans and not to our generals. Egypt should be like Turkey."

Egyptian Christians like Fayze have an especially high opinion of Erdogan because, despite being a devout Muslim himself, he hasn't once allowed himself to be roped in by the Muslim Brotherhood.

Last Monday, the Brotherhood held a reception for him as if welcoming one of their own. But, already by Tuesday, Erdogan was forced to disappoint them by saying that Turkey was a secular state and that it was also better that way. That took the air out of the Brotherhood's celebratory mood rather quickly.

The Hero of the Arab Street

Last week, Erdogan embarked on a "revolution tour," visiting Cairo, Tunis and Tripoli as the hero of the Arab street. While the Turkish Daily News compared him to Gamal Abdel Nasser, Egypt's former tribune of the people, Israeli bloggers compared him to Iranian President Mahmoud Ahmadinejad.

Though very different, both of the comparisons smack of truth: Two weeks ago, Erdogan expelled senior Israeli diplomats from Turkey with the rage of a dictator and threatened to dispatch warships to the eastern Mediterranean because Jerusalem had still refused to apologize for its May 2010 raid on an international flotilla bringing aid to a besieged Gaza Strip, which left eight Turks and a US citizen dead.

At the same time, Erdogan embodies the confidence and self-assuredness of a generation of Arabs who are standing on the eve of the kind of diplomatic showdown that only comes every few decades, even in the Middle East. On Friday, Palestinian Authority President Mahmoud Abbas plans to campaign for a Palestinian state to be accepted into the United Nations while simultaneously submitting an application for full membership to UN Secretary-General Ban Ki-moon.

During his visit to Cairo on Tuesday, Erdogan said international recognition of a Palestinian state is "not an option but an obligation," and that Israel had been acting like a "spoiled child" for too long. He asked why the Palestinians should be denied the same right of self-determination that the Tunisians, Egyptians and Libyans had won for themselves. "It's time to raise the Palestinian flag at the United Nations," he said.

A Panther-Like Leap into the United Nations

Few in the Arab world -- and, indeed, few in the entire world -- would take issue with this last point. The idea that a two-state solution is probably the best way to bring peace to the Middle East is a valid one. Equally valid is the realization that it is slowly becoming time to put that idea into practice.

Even so, there is still a group of states and governments -- including Israel, the United States and Germany -- that have openly voiced their opposition to Abbas' panther-like leap into the United Nations.

Others -- including, paradoxically, even the Palestinians themselves -- are divided over the issue. Palestinian Prime Minister Salam Fayyad, for example, told SPIEGEL he would prefer to be granted observer status by the UN General Assembly than to apply to the UN Security Council for full membership.

After all, if the United States follows through on its pledge to exercise its veto in the Security Council, it could lead to serious consequences: It wouldn't just harden the stances of Turkey and Egypt. Saudi Arabia Prince Turki al-Faisal, the brother and likely successor to the country's seriously ill foreign minister, has announced he won't continue his country's long-standing cooperation with the Americans in its current form if America exercises its veto. The country with the most to lose from this kind of downgrading of the US-Saudi relationship would be Israel.

If the Palestinians even just seek recognition in the General Assembly, Israel could lose the support of the European Union. EU High Representative for Foreign Affairs Catherine Ashton is feverishly working to reach a comprise with the Palestinians that would give them a status as a non-member observer state, somewhat analogous to the one enjoyed by the Vatican. The arrangement would also require the Palestinians to waive their right to bring Israeli politicians before the International Criminal Court.

The majority of EU member states would most likely back this kind of solution. But there is still no deal in sight.

A storm is brewing for Israel no matter which way things go. More Israelis view their country as being surrounded by enemies than has been the case for decades. The only difference is that it isn't the governments of their neighboring countries that they perceive as their enemies; it's their populations.

The fact that Israel appears so isolated can also be partially blamed on its own government. Instead of taking advantage of the historic opportunity offered by the Arab Spring, Israeli Prime Minister Benjamin Netanyahu traveled to Sofia and Bucharest and dispatched his foreign minister, Avigdor Lieberman, to Tirana as part of a concerted effort to forge a Balkan alliance. But talks with Romania, Bulgaria and Albania will be no replacement for ones with Egypt, Jordan and Turkey.

Indeed, Israel's government has taken a skeptical tone in its comments on the revolutions in the Arab world, and negotiations with the Palestinians have been shelved for over a year. And ever since the Palestinian Authority publically announced its bid to join the UN, Israeli politicians have been complaining nonstop that the step was taken unilaterally.

For some time now, Israel's security services have been cautioning the government against letting this opportunity slip by. Internal analyses, some of which were published by the Israeli daily Haaretz, have concluded that negotiations are the only way to ease political tensions. In recent months, a number of former intelligence chiefs have voiced similar opinions. Opposition leader Zipi Livni has accused Netanyahu of having brought about "the worst possible diplomatic situation." And even Ehud Barak, Netanyahu's defense minister, has reportedly admonished him in a close-door meeting, saying: "By sharpening tensions with the Palestinians, we are inviting isolation on Israel."

Peering into the Abyss

Two weeks ago, when an Egyptian mob attacked the Israeli Embassy in Cairo with hammers and chisels, both sides finally found themselves looking into the abyss. While Israeli diplomats in Cairo were holed up in a back room of the embassy, their Egyptian colleagues were sitting on the roof of their country's embassy in Tel Aviv burning secret documents. The diplomats had figured they would be immediately expelled. And things actually did get very close to reaching that point.

Softer tones have only been heard on the Israeli side since the shock of the embassy storming. "We have to change the trend that was created in Turkey and moved to Egypt," said Dan Meridor, Israel's deputy prime minister. Jerusalem made no official statement on Erdogan's threat to deploy warships. And Netanyahu was almost gushing in his thanks to the military council currently ruling in Cairo for saving his diplomats by having troops from an elite unit dress them in Arab clothing and provide them with safe passage to the airport. Even Lieberman, a hawk who wanted to have the Aswan Dam bombed for even lesser reasons during the Mubarak era, was diplomatic, gently declaring that Israel would strengthen its peace treaty with Egypt.

"Israelis may ultimately be more secure in a world of Arab democracies," columnist David Ignatius wrote in the Washington Post in mid-September. "But it will be a world where compromise is part of survival."

No Political Momentum Expected from Washington

However, it would appear that the United States, the traditional stabilizing power for the region, has yet to make any substantial contribution to the reaching of such a compromise. Indeed, few American presidents have so lastingly embarrassed themselves in the Middle East in such a short time as Barack Obama. It was he who made calls in September 2010 for the founding of a Palestinian state within a year. But his administration buckled before the American-Israeli pro-settler lobby, thereby effectively sidelining the moderate Abbas.

Meanwhile, Obama is about to start a re-election campaign in which he doesn't believe he can do without the approval of the Israel-backers within his constituency. Before next year's presidential election, Washington isn't expected to make any serious effort to create political momentum in the Middle East.

Still, the image being created by the Europeans at the moment inspires only slightly more confidence. The Dutch and the Czechs intend to vote with Israel against recognizing Palestinian statehood no matter what. France, Poland, Spain, Portugal, Belgium, Sweden, Finland and Luxembourg are leaning toward supporting the Palestinians. The United Kingdom is wavering.

Germany's government isn't harboring any illusions. Sources within the Chancellery and Foreign Ministry say that, at the very least, Britain, France and Germany have to agree on a common stance that can in turn be backed by a majority of EU member states.

Fears in Germany over Possible Isolation within EU

Ironically enough, the main obstacle to reaching this kind of shared stance is Germany. When Netanyahu visited Berlin in April, Chancellor Angela Merkel said that unilateral recognition would "under absolutely no circumstances" contribute to a peaceful solution of the Middle East crisis and that her government would maintain that same stance at the UN.

In doing so, Merkel adopted her guest's position and made up for the several previous occasions on which she had criticized Israel for allowing settlement construction to continue. She also made up for an episode in early 2011 in which Germany backed a resolution directed against Israel in the UN Security Council that led to a heated exchange between Merkel and Netanyahu. Indeed, after Netanyahu called Merkel to express his disappointment in Germany's vote, Merkel is reported to have angrily responded: "How dare you?"

As the date of the General Assembly meeting approaches, the Chancellery is growing increasingly worried that Germany's stance might isolate it within the EU. Officials in the Foreign Ministry had already viewed Merkel's earlier commitment to Netanyahu as a mistake. Even Christoph Heusgen, Merkel's foreign-policy adviser, was reportedly unhappy about her statement.

The French are also upset about Germany's steps. One senior French diplomat has complained that the EU's role in the Middle East will be finished if Germany stands in the way of consensus. As he sees it, this would only cause Europe to unnecessarily give up any chances it might have to influence matters.

Berlin is still hoping the Palestinians will make a move and back the Ashton plan and that the almost 4 million people living in the West Bank, East Jerusalem and the Gaza Strip will settle for an observer status based on the Vatican model.

Whether any of this will happen is still an open question. As one diplomat in the Foreign Ministry fears, Germany might ultimately be forced to vote with the Israelis "against their better judgment."

The result would be a political vacuum left behind by a dithering and timid West. But, in the end, it can still be happy that the man who will be filling this vacuum will be named Erdogan and not Ahmadinejad.