The world is preoccupied with containing the coronavirus and its impact on the economy. Pharmaceutical companies are working at full tilt to develop a vaccine that could end the COVID-19 crisis. There is no doubt these efforts are necessary, but the world's focus on this new infectious disease is distracting from other life-threatening illnesses -- and siphoning off resources necessary to combat them.

This will likely have fatal consequences. Experts fear millions of deaths in the coming months and years, not as a result of the coronavirus, but due to other diseases that are actually treatable. Progress made by governments and NGOs is at risk of being lost.

In Great Britain, for instance, the charity Cancer Research UK estimates that every week, some 2,300 people with cancer symptoms are no longer being examined. At the same time, as many as 200,000 women a week have stopped receiving preventative check-ups for breast and uterine cancer. The result: Cancers that are otherwise easy to detect and treat early are becoming a health risk. The same is also true for many acute cases.

According to the British Heart Foundation, 50 percent fewer people suspected of having a heart attack sought emergency treatment at hospitals in March. It is difficult to know what the consequences might be, but doctors are concerned about a possible increase in deaths or serious secondary illnesses in large parts of Europe.

Meanwhile, many other countries around the world are much more severely affected. These include poorer nations that have spent years fighting highly contagious infectious diseases, such as tuberculosis, HIV or measles. The tropical disease malaria is another example. In many places, the spread of such diseases was largely under control. Now, though, with attention focused on the coronavirus, they are expanding again, with each country facing its own specific danger. Viewed globally, however, there are similarities.

Every year, an estimated 10 million people become infected with the respiratory disease tuberculosis and 1.5 million people die from it. In India alone, a thousand people a day fall victim to it, making tuberculosis the most deadly of all infectious diseases.

A new study from the international campaign Stop TB Partnership predicts an additional 6.3 million cases of tuberculosis worldwide and 1.4 million deaths between 2020 and 2025.

"The fight against tuberculosis is very tough. As soon as you interrupt it, this terrible disease comes back with a vengeance."

"The fight against tuberculosis is very tough. As soon as you interrupt it, this terrible disease comes back with a vengeance," says Lucica Ditiu, a Romanian physician with Stop TB Partnership. The organization had originally hoped to have eradicated tuberculosis by 2030.

Now, that goal is a long way off. "We won't be able to reach it unless we get three times the financial support we have now." The campaign currently has around 5 billion euros ($5.4 billion) a year at its disposal.

More than 250,000 people around the world have died from COVID-19 so far, yet there could be millions of additional deaths from tuberculosis alone. With this in mind, Madhukar Pai, the head of McGill Global Health Program, is amazed at how much more attention the new virus is receiving compared to tuberculosis.

In India, it has become more difficult for tuberculosis patients to receive treatment since the outbreak of the coronavirus pandemic and many private medical practices have remained closed during the country's strict lockdown. Public transportation still isn't running in much of the country, making it impossible for many sick people in rural areas to seek medical attention. And even those who do somehow manage to see a doctor are often sent away. Tuberculosis can cause coughing and fever -- symptoms similar to those of COVID-19. Fearing for the health of their staff and patients, some hospitals are said to be turning away tuberculosis patients.

India has a national vaccination program to ensure that children are inoculated against more than a dozen different diseases, including polio, measles and diphtheria. There are also so-called BCG vaccinations against tuberculosis. But in March alone, more than 100,000 children didn't receive their BCG vaccinations, according to "Livemint," an Indian news website, citing data from the Indian Health Ministry.

This is especially dangerous because people with tuberculosis face a higher risk from COVID-19, which also affects the lungs. But tuberculosis vaccinations aren't the only ones currently falling by the wayside.

The Gavi Vaccine Alliance, one of the most important organizations when it comes to financing vaccine programs in poorer countries, is struggling to come up with the necessary financial resources. It has described the effects of the coronavirus crisis as "devastating," and estimates that some 13.5 million people now lack important vaccinations. "COVID-19 shouldn't mean a global resurgence of other killers like polio or measles," says Seth Berkley, CEO of Gavi Vaccine Alliance.

The World Health Organization (WHO) warned in April that 117 million children worldwide were unable to be vaccinated against measles. Dozens of countries have paused their vaccination campaigns and reassigned medical personnel in order to stop the spread of the new coronavirus. There are also shortages of vaccine supplies. There have already been isolated outbreaks of the potentially fatal disease in Bangladesh, Nepal and Pakistan. "If we're not careful, we'll see the return of a disease that is much more contagious than COVID-19," the Yale economist Mushfiq Mobarak told DER SPIEGEL.

The figures for malaria are similarly alarming. In late April, the WHO published model calculations according to which the number of malaria deaths in Africa could double this year, from an estimated 386,000 deaths to 769,000. Malaria mainly affects poor tropical and subtropical countries, with the disease representing a leading cause of death in many of these countries.

In addition to the personal suffering caused by malaria, the financial costs are enormous for families, communities and countries alike. The direct costs are estimated at around $12 billion (11.1 billion euros) per year, according to the U.S. Centers for Disease Control and Prevention. But the negative impact the disease can have on economic growth is even higher.

According to the WHO, 228 million people around the world were infected with the mosquito-borne illness in 2018. Of those, 93 percent were in Africa and many were children. Those figures are likely to dramatically increase in 2020.

In recent weeks, many countries have begun facing supply chain disruptions, with important anti-malarial tools such as protective nets, rapid tests and medicines no longer making it to where they are needed due to import and export restrictions and the massive decline in flights. "We run the risk of being set back by 20 years," says Pedro Alonso, director of the WHO's malaria program.

Experience gained during other epidemics in Africa is also a cause for concern. The Ebola outbreak in Guinea, Liberia and Sierra Leone between 2014 and 2016, for instance, hindered the fight against malaria to such an extreme degree that there was a huge uptick in malaria-related diseases and deaths.

A projection by Imperial College London put that increase in deaths at 5,600 in Guinea alone. Compared to that country's 2,543 Ebola deaths, that's a staggeringly high number.

Meanwhile, the effects of the coronavirus pandemic are expected to be even more dramatic. And this time, the entire world will be affected. 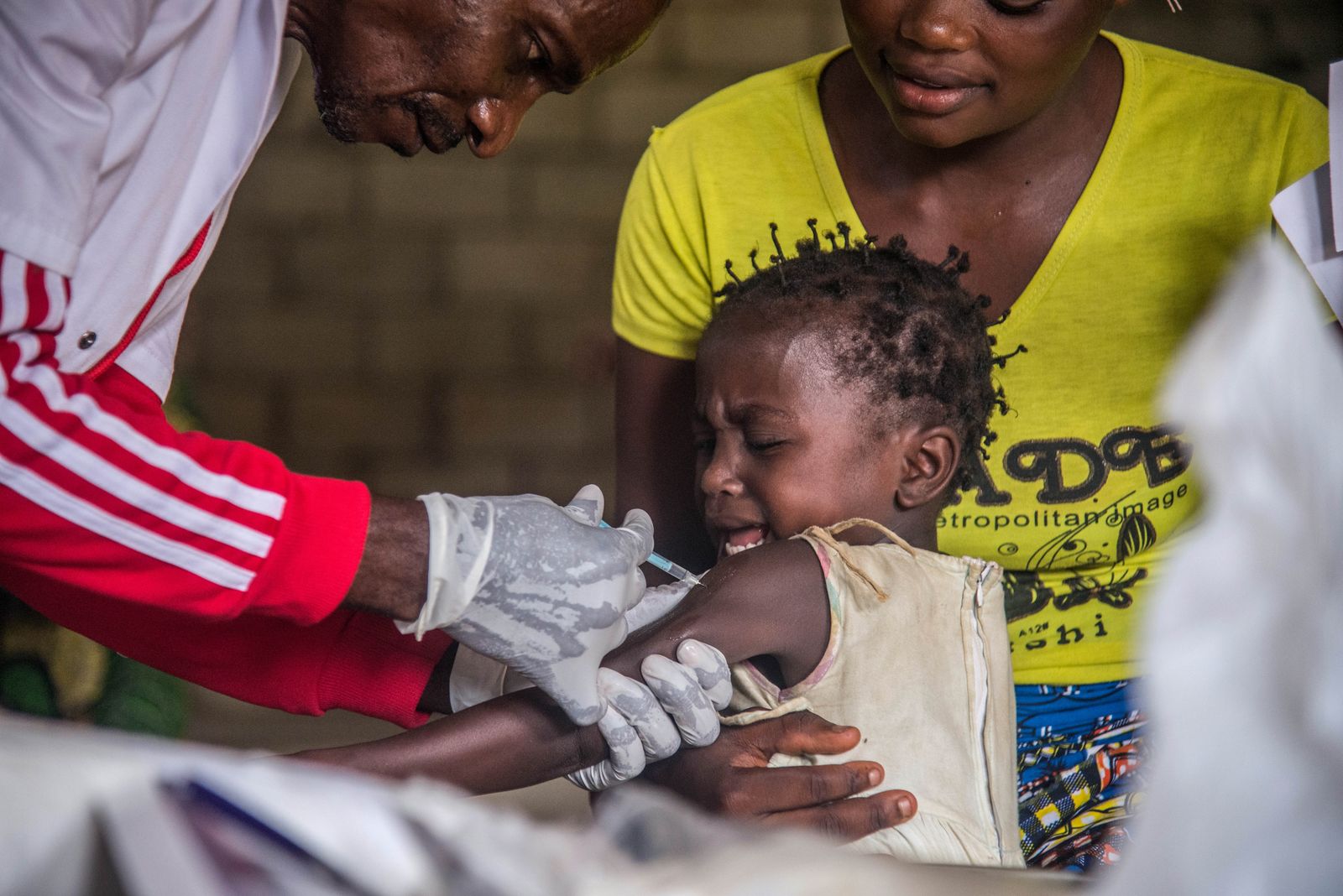 Measles vaccination in the Democratic Republic of the Congo: Efforts made to combat other diseases are suffering as the focus shifts to COVID-19. 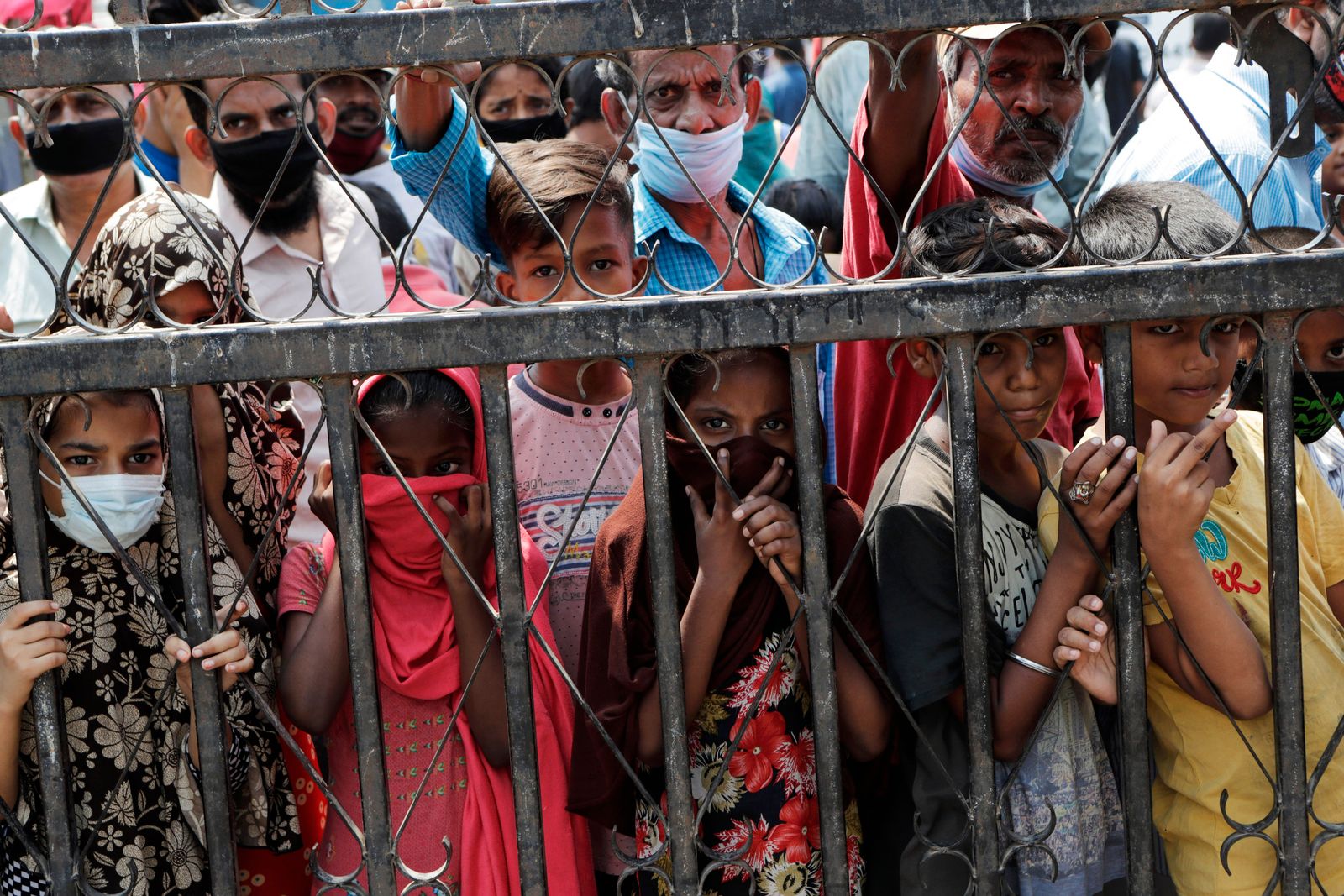 People in a slum in Mumbai wait for a food delivery during the lockdown in mid-April. Not only are they in danger of contracting the coronavirus and going hungry, but now they must also fear an increased risk from other diseases. 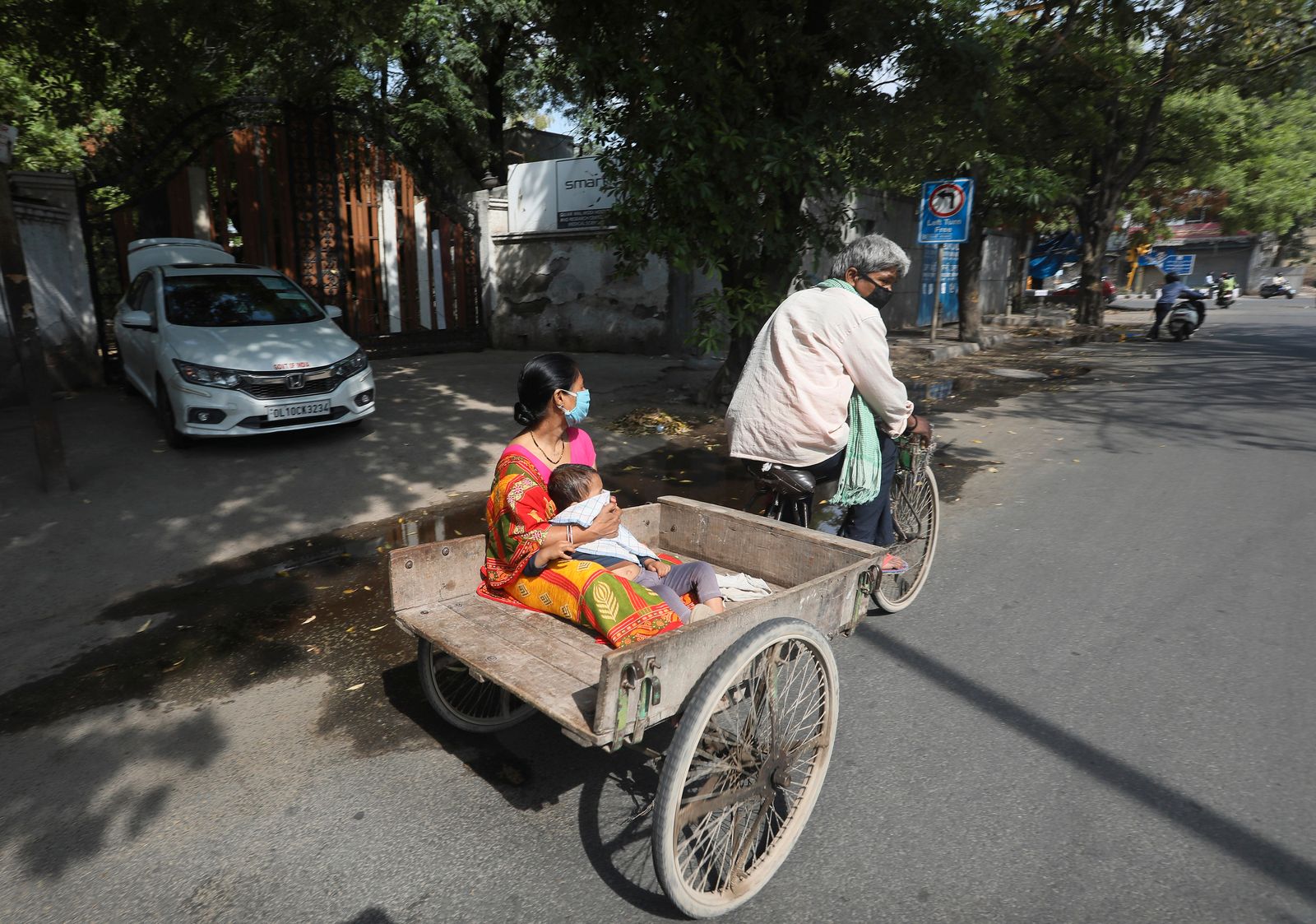 An Indian mother tries to bring her sick son to the hospital. Public transportation isn't running. The coronavirus has often been referred to as an "equalizer." In fact, it has often exacerbated social injustices around the world. 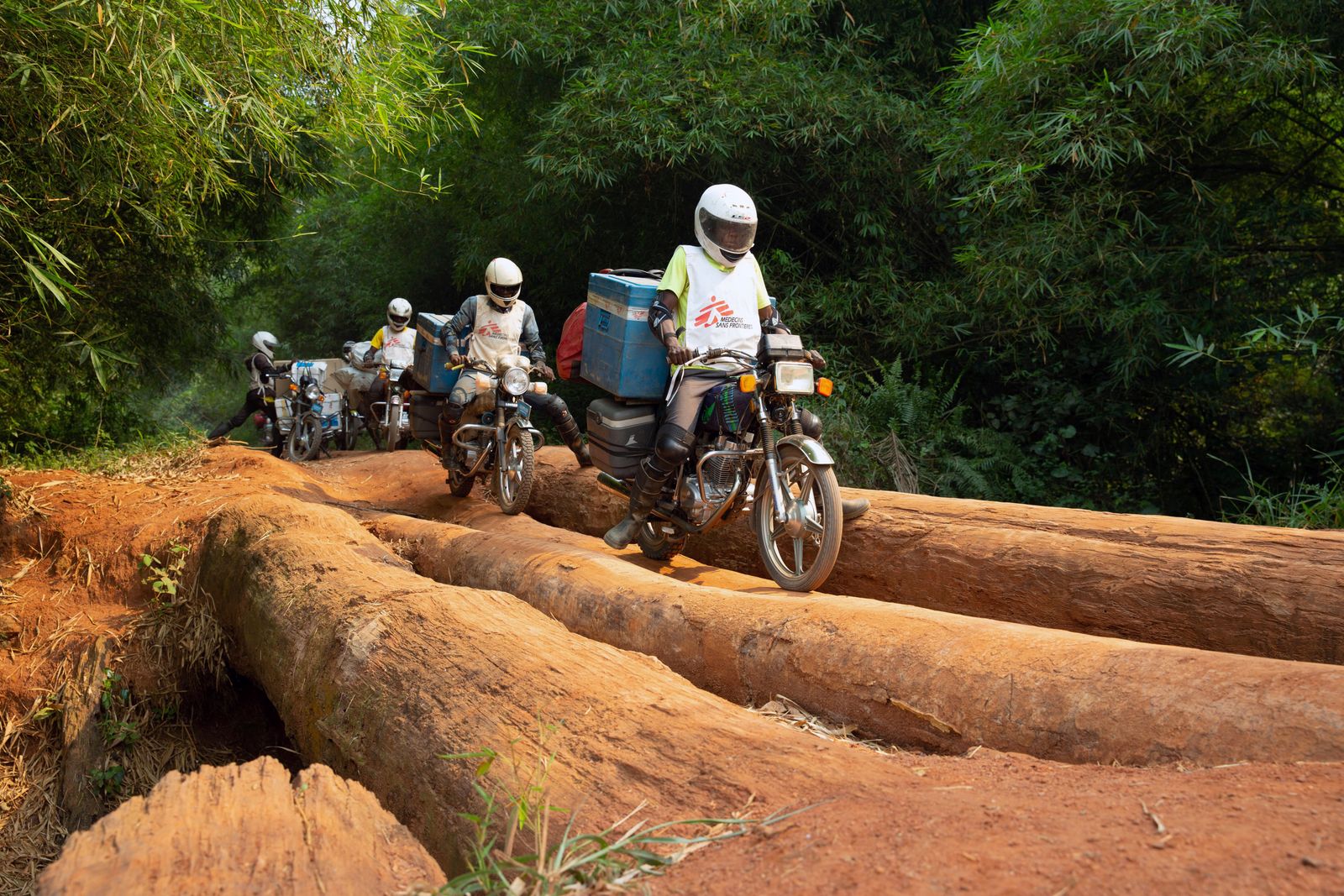 The NGO Doctors Without Borders brings measles vaccinations and medical supplies to remote regions via motorcycle, as seen here in the Democratic Republic of Congo. In many countries, it is now virtually impossible to provide rural populations with this important vaccine.