Slums, sadly, look largely the same the world over -- rickety metal roofed huts thrown together on the edges of vast metropolises to provide some rudimentary shelter for the destitute who live there. 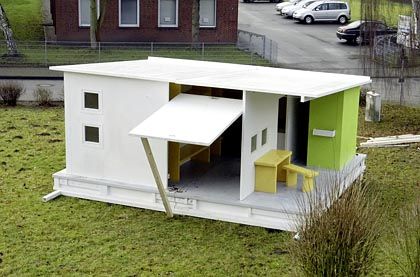 A model of the new paper house was set up in Kiel in December.

But if a newly designed pre-fabricated house developed in conjunction with the Bauhaus University in the eastern German city of Weimar catches on, the world's shantytowns could get a new look. The buildings are cheap, sturdy -- and made out of paper.

"From the very beginning, our goal was to create practical, environmentally sustainable, and, most importantly, cheap living quarters for the slums of the Earth," Gerd Niemöller, who developed the cellulose material the houses are made of, said in a recent statement. "Now, that is possible."

Niemöller is a co-founder of the Swiss company The Wall AG, which holds the patent for material used in the construction of the mini-homes. But, he says, he envisions the houses -- called the "Universal World House" -- ultimately being produced in the countries where they are needed. And, he says, the sticker price for the 36 square meter (387.5 square foot) structures won't be more than $5,000 each.

The material used in the construction of the houses mimics the honeycomb pattern used in the manufacture of airplanes and other products for which both weight and strength are important factors. But instead of using aluminium or other alloys, Niemöller used resin-soaked paper processed to form thin, light -- yet strong -- panels. The material is also an excellent insulator, and is flexible, making it appropriate in areas at risk of earthquakes.

According to Niemöller's business model, his company would deliver the machines to manufacture the panels along with the raw materials. Everything else would be taken care of by locals.

Interest has already been large. One of the first settlements made up of the paper houses will be built in Zimbabwe in conjunction with the German aid organization World Vision. Nigeria too has ordered 2,400 of the houses.