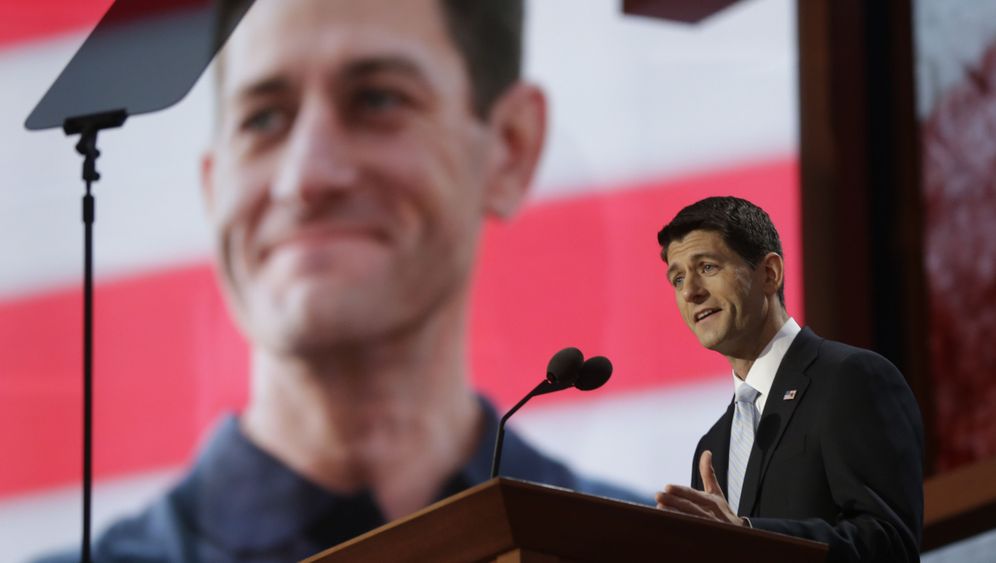 Sarah Palin was not physically present when Paul Ryan, her successor as Republican vice presidential candidate, took the stage at the Republican National Convention in Tampa on Wednesday night. Nevertheless, she loomed over the proceedings.

With Palin now largely an object of ridicule, it is easy to forget just how engaging she was four years ago when she made her opening speech as John McCain's vice presidential candidate. Immediately, she transfixed both the convention and millions watching on television. And her speech culminated in the now famous sentence that the only difference between a "hockey mom" and a pitbull was lipstick.

The world listened with fascination because they sensed the fighting spirit of a woman who was once nicknamed "Barracuda" on the basketball court. And they also listened in fear. Within half and hour, Palin had, in the view of many Europeans, ousted George W. Bush as the defining symbol of a hard and sometimes ruthless America.

Paul Ryan is not being compared to a barracuda. Instead, he reminds some more of the Jimmy Stewart character in the film classic "Mr. Smith Goes to Washington," which tells the story of an upstanding citizen who travels to the US capital to remind politicians of their obligations. Like Stewart, Ryan also comes across as an amiable man next door -- a normal guy who, with a smile but also with resolve, tells his fellow citizens to finally put the public finances in order.

Determination of a Crusader

That was how he came across in Tampa. While Palin attacked the Democrats like a pitbull, Ryan resembled more "a pitbull with a smile," as New York Times correspondent Jeff Zeleny wrote on Twitter. At times, he even seemed like a harmless puppy. After all, Ryan is just 42, the same age as Mitt Romney's eldest son. The candidate looked more like a choirboy than a political extremist.

But behind Ryan's puppy-like face is the determination of a crusader. His soft words during the convention speech revealed a hard line.

Unlike Palin, who became candidate without much preparation, Ryan has been preparing for his appearance on the grand political stage ever since he entered Congress 14 years ago. Romney's running mate has a battle plan ready that will have a bigger impact on America's democracy than all of Palin's rhetorical attacks put together. It is nothing less than a declaration of war on social solidarity in America.

Ryan's political philosophy draws on the writings of the Austrian economist Friedrich Hayek, who condemned the modern welfare state as a "road to serfdom." As a young man, the Republican politician devoured Ayn Rand's capitalist Bible "Atlas Shrugged," which glorifies selfishness as a noble virtue. Rand depicted the world as a kind of jungle, where the strong are always right and the weak have only themselves to blame for their own weakness.

Ryan's own philosophy calls for making cuts that will affect the weak. Ryan would like to see the introduction of a voucher system to replace Medicare and supports the repeal of President Barack Obama's healthcare plan, which would affect the 30 million Americans who would receive health insurance under his reform. But cuts would also reach further, to government protection against epidemics, for example, or even to fire fighters. In Ryan's stripped-down state, there would be little money available for such luxuries.

But wouldn't such a slash-and-burn approach actually reduce America's massive debt? Many experts believe it is very unlikely. After all, Ryan also wants to give more to the rich. He would reduce their taxes, so that Mitt Romney, say, who has an estimated personal fortune of around $250 million, would only face a tax rate of 0.82 percent.

The people this would benefit most are billionaire Republican donors. But Ryan still sees himself as a man of the people. He loves to quote Ronald Reagan's assertion that, when the rich have more, their wealth will "trickle down" to all citizens. He seems to forget that the results of that experiment are well known. In 1982, Reagan had to massively increase taxes because the US budget deficit had grown so huge.

But that doesn't shake Ryan's convictions. In terms of hypocrisy, he is a worthy heir to those Republicans who condemn the state but are happy to use it when they want to ban something that does not fit into their worldview. Ryan, who is supposedly so skeptical about government, has supported more abortion restrictions than his party colleague Todd Akin, who recently caused a scandal with his remarks about "legitimate rape."

In terms of foreign policy, too, Ryan supports a strong state of the hawkish variety touted by American neocons. Even the right-wing Weekly Standard, the same conservative publication that drove George W. Bush to invade Iraq and who "discovered" Palin four years ago, recommended Ryan as candidate.

Palin was not able to prove herself as a leader of the angry conservatives, for want of expertise and ideas. Ryan, on the other hand, knows exactly what he wants to achieve in the White House -- better, in fact, that his boss Romney does. It is strange that the number two has a plan ready, but the number one does not, wrote The Economist.

Mitt Romney, 65, will be quickly forgotten among Republicans, should he lose the election. Paul Ryan, 42, however, is likely to win, even if he loses now at Romney's side. He still has many years to influence the American right.

And even if the man has a warm smile, that prospect is cold comfort.