SPIEGEL: Mr. Wolfowitz, as deputy secretary of defense under President George W. Bush, you supported the invasion of Iraq in 2003. Today, many people regard this war as a key factor behind the instability in the Middle East as well as the rise of the Islamic State (IS). Do you feel personally responsible?

Wolfowitz: No, because Islamic State is mainly a direct result of the failure in Syria. That's where IS has grown. That's where IS spread from. The Western alliance should have supported the Sunni opposition against the Assad regime from the beginning. As far as Iraq is concerned, if it had stayed stable the way it was in 2008, IS would not have been able to expand in Iraq the way they did. The mistake was that Barack Obama withdrew the armed forces from Iraq too fast.

SPIEGEL: Republican presidential nominee Donald Trump criticized the war in Iraq, too. He has announced he wants to stop "current policies of nation-building and regime change" -- precisely the policy you backed.

Wolfowitz: It would be a huge mistake to abandon democracy promotion. Peaceful political change has been enormously successful in the past years in Eastern European countries as well as in countries like South Korea, South Africa, Chile and Indonesia. However, if possible, the use of force is something to avoid except in cases where genocide is threatened, like Bosnia or Libya or with regimes that threaten our security, like the Taliban and Saddam Hussein. After a regime is removed, however, it is dangerous to leave a security vacuum. This is where we failed in Libya and in Iraq.

SPIEGEL: Does it annoy you that you are called the "Architect of the Iraq War"?

Wolfowitz: Annoyed isn't the right word, it's inaccurate. If I had been the architect, a lot of these things would be different. As a matter of fact, I believed after 9/11, there was reason to get much tougher about the fact that Saddam was blocking the inspections for weapons of mass destruction. He was harboring terrorists. I thought that it was time to give Saddam an ultimatum just as we did with the Taliban who were harboring Osama Bin Laden. People seem to forget that Saddam was the only leader in the world who praised the attacks of 9/11 as a good thing.

SPIEGEL: You wrongly claimed at the time that Saddam Hussein had weapons of mass destruction.

Wolfowitz: It was the unanimous feeling of our intelligence community that he had them. The director of the CIA told President George W. Bush, it's an obvious case. Saddam Hussein had nerve gas and used it against his own people, he had used chemical weapons against the Iranians and he almost had a nuclear bomb in 1981 and in 1991. And he had been caught with anthrax in 1995 by the UN inspections after denying that he had it.

SPIEGEL: Today we know that he did not possess weapons of mass destruction at the time of the Iraq war.

SPIEGEL: You once said in an interview that there should have been Iraqi leadership from the very beginning rather than establishing an occupation authority. Why didn't you do that at the time?

Wolfowitz: It was considered. It also seemed as though the decision was headed in that direction in March 2003. And then, in May 2003, US Ambassador Paul Bremer was appointed with full authority. Bremer and the State Department decided that what was needed was an occupation authority. I thought that was a mistake. We came to liberate the country. Then we occupied it. To many Iraqis, it was a complete contradiction. It made them suspect our intentions and it gave us the same image as the Israelis.

SPIEGEL: So what would you say was executed wrong by the US government?

Wolfowitz: I think a number of things should have been done differently. It took us too long to develop a counterinsurgency strategy. If we had stabilized Iraq in 2005 the way we eventually did in 2008, we'd be talking about a completely different situation today.

SPIEGEL: As a consequence of the policies pursued under Bush, President Obama has acted even more carefully and defined a new doctrine: "Don't do stupid shit." After the Bush administration's interventionism, he countered it with "Obama realism."

Wolfowitz: It reminds me of Mark Twain, who said: If a cat sits on a hot stove once, it will never sit on a cold one either. I think Obama sees everything through one lens. Doing nothing in the face of the slaughter in Syria is not only shameful, it is unrealistic. This approach leaves Syria as a broken country and a breeding ground for extremists for decades. Instead of focusing on Iraq in 2003, Obama should have thought more about what happened there in 1991. In the north, we protected the Kurds -- in the south, we were not intervening while the Shia were slaughtered and gassed by Saddam Hussein. To stay back from an intervention is not always a good solution.

SPIEGEL: Meanwhile, structures of IS are being relatively successfully attacked in Iraq and Syria. However, the ideology seems harder to destroy in this way.

Wolfowitz: I agree that there is an ideological issue that is huge. In that respect, the Arab Spring was a missed opportunity. To allow Syria to get to the point that it is at today has been a terrible defeat for moderate Muslims all around the world. Other failures were not to follow up and create stability in Libya (after Gadhafi), as well as the fact that Egypt has gone in the wrong direction. If the Arab world today looked like Tunisia, it would be a huge blow for the extreme ideologies. But Tunisia needs more support than it is getting, particularly from their close neighbors in Europe who have a great stake in North Africa.

SPIEGEL: Paris, Brussels, Orlando, Nice -- is the West threatened even more today by terrorists than it was 15 years ago?

Wolfowitz: Fifteen years ago, we had 3,000 people killed in a single day. We had a very real concern that terrorists were going to get their hands on anthrax or sarin. The fact that that hasn't happened is itself an achievement. But, obviously, these so-called smaller attacks are a problem. People change their habits. I know Americans who don't go to Paris because they think it is too dangerous. I think that is an overreaction. Countries like Pakistan and Bangladesh have been living with this level of terrorism for a long time. But life goes on.

Wolfowitz: Yes, he is.

Wolfowitz: He says he admires Putin, that Saddam Hussein was killing terrorists, that the Chinese were impressive because they were tough on Tiananmen Square. That is pretty disturbing.

SPIEGEL: Do you think it's time for people like you to speak out against Trump?

Wolfowitz: It's complicated. Trump says that it is precisely we and our policies that are responsible for the mess in Iraq. But I certainly think it's important to speak up and say how unacceptable he is. I'm always more than willing to do that.

SPIEGEL: Are you afraid of the possible consequences a Trump presidency would have on foreign and security policy?

Wolfowitz: The only way you can be comfortable about Trump's foreign policy, is to think he doesn't really mean anything he says. That's a pretty uncomfortable place to be in. Our security depends on having good relationships with our allies. Trump mainly shows contempt for them. And he seems to be unconcerned about the Russian aggression in Ukraine. By doing this he tells them that they can go ahead and do what they are doing. That is dangerous.

SPIEGEL: Trump seems to be particularly willing to find a new partner in Russia.

Wolfowitz: Putin is behaving in a very dangerous way. And Trump sounds as though he would simply sit back and allow that to go on. I worry about where that would end up.

SPIEGEL: Donald Trump has also questioned NATO's importance to the United States. Can you understand him on this point?

Wolfowitz: No, because NATO is still very important for us, it is still the most remarkable alliance in history. It stuck together through 40 years of Cold War, and it then joined together to fight in Afghanistan. In the 1980s, I would not have thought this was going to be possible.

SPIEGEL: How would the world change if Trump became president?

Wolfowitz: We are already seeing a degree of instability in the world because Obama seems to have consciously wanted to step back. Trump is going to be "Obama squared," a more extreme version of the same thing.

Wolfowitz: Obviously, there's unhappiness among the population. The Bernie Sanders phenomenon shows that it's not confined to Republicans. There is a general sentiment that the country is on the wrong track. Against that background of pessimism, someone like Trump can be successful in getting the nomination.

SPIEGEL: Who are you going to vote for in November?

Wolfowitz: I wish there were somebody I could be comfortable voting for. I might have to vote for Hillary Clinton, even though I have big reservations about her. 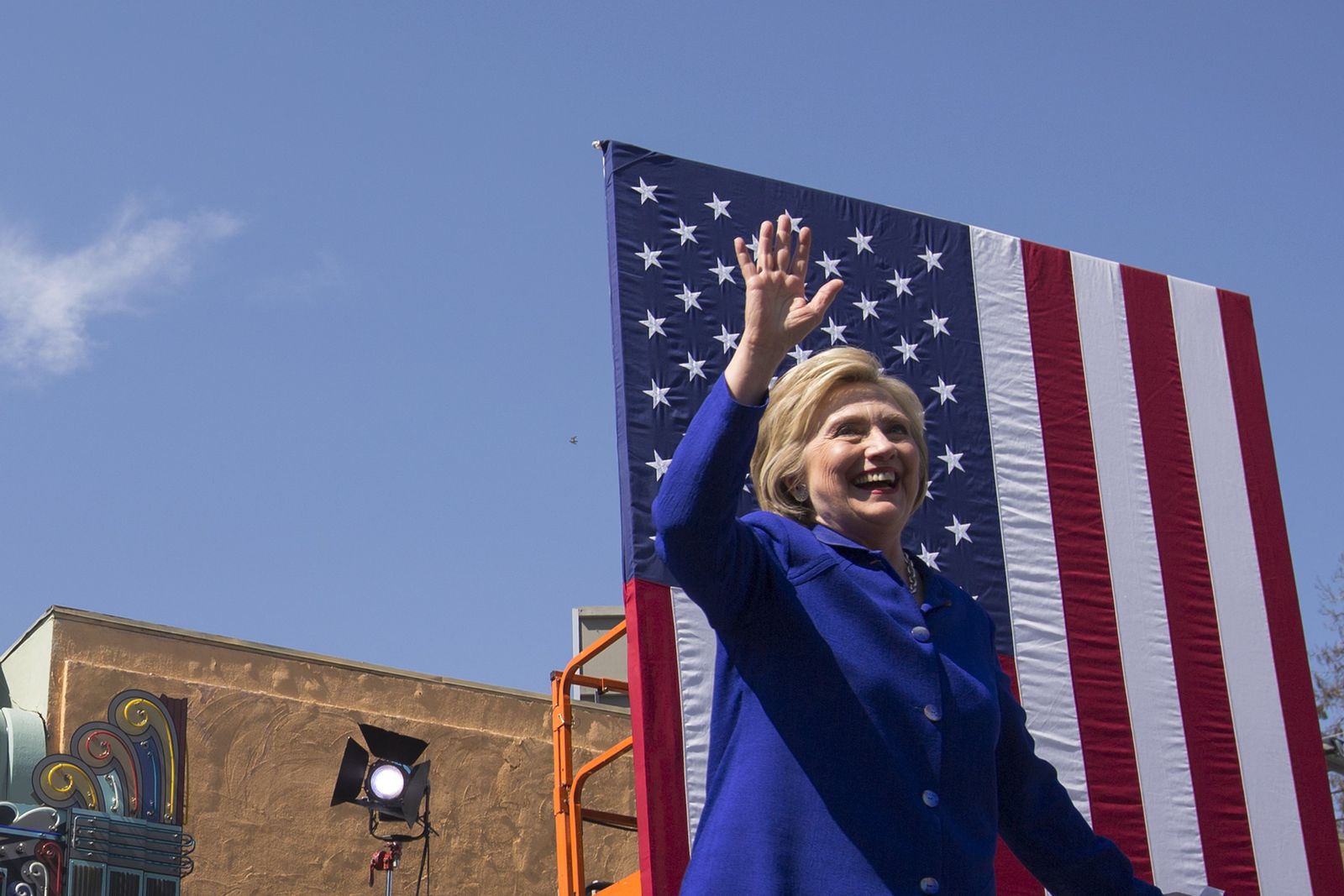 Wolfowitz on Clinton: "I might have to vote for Hillary Clinton, even though I have big reservations."