Mulai Hamdi Uld al-Rashid knows how to turn a profit from the desert. The bald-headed mayor of Ajun in Western Sahara stands at the window of his office and smiles serenely. As far as Rashid is concerned, the sand that routinely whistles through his city, sometimes burying entire houses in the process, has been a headache for far too long. Now that same annoying sand is being shipped over to the nearby Canary Islands, where beaches are shrinking and the coasts are becoming rocky.

But that's only the beginning. Next on the mayor's agenda are the tourists he hopes will soon be crowding onto cheap flights from Las Palmas, the largest city on the islands, to Ajun for camel rides, traditional dancing and tea ceremonies.

Of course, says the mayor, first he will have to solve his region's image problem. Western Sahara isn't exactly known as a hot spot for tourists eager to experience the romantic Bedouin lifestyle. But Rashid is confident nonetheless. As a member of the "The Royal Advisory Council for Saharan Affairs," he helped develop a new autonomy plan for his native region.

"Autonomy!" he exclaims, walking excitedly back and forth in his office. "Just think what that means for us! Our own parliament, our own government. It will enable us to solve all of our problems. It is only a matter of time before the refugee camps disappear and the Polisario abandons its struggle!"

Referendum over the Region's Future

A dusty wind sweeps across the square outside his office. A few men and women, looking preoccupied, dart past in long, traditional robes. White United Nations jeeps patrol the streets. For the past 16 years, the United Nations Mission for the Referendum in Western Sahara (MINURSO) has been monitoring a cease-fire between Morocco and the Sahara independence movement Frente Polisario. Its current task is to organize a referendum over the region's political future.

The UN peacekeepers are here to monitor Africa's oldest territorial conflict, a conflict that dates back to the days of de-colonialization. It is an anachronistic dispute over roughly 270,000 square kilometers (about 104,000 square miles), but rich fishing grounds and phosphate deposits, exploited by Spain until 1975, are also at stake. When the colonial power, Spain, withdrew, Morocco -- together with Mauritania, at first -- occupied the thinly populated region along the Atlantic coast. The invasion of 350,000 subjects of then King Hassan II, armed with nothing but the green flags of Islam, went down in history as the "Green March." 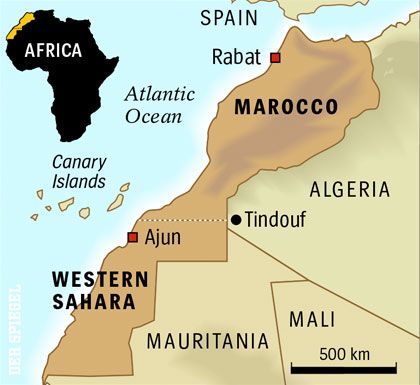 Could there be lasting peace in the desert?

Hassan II claimed "historic rights," a claim that had some justification, feeble as it might seem. Sahrawi nomadic tribes did in fact swear an oath of allegiance to the sultans to the north in the Middle Ages.

But a group of Sahrawi freedom fighters, the Frente Polisario, invoked the right of self-determination for their people and demanded an independent state. It engaged the occupying power in a tough guerilla war, supported mainly by Morocco's archenemy Algeria, which hoped to gain a satellite with access to the Atlantic. In 1976, Polisario proclaimed the "Sahrawi Arab Democratic Republic." Most of the war's refugees fled to Tindouf, a town in the Algerian desert, where they erected a giant tent city that is still standing today.

Who Owns the Desert?

The war ended in 1991, but a referendum demanded by the UN never took place. The positions of the warring parties were too intransigent. Morocco refused to even negotiate over independence for what it called its "southern provinces," and Polisario rejected any proposed compromise that did not call for a sovereign Sahara state.

"The UN did not find a solution to the problem," said then UN Secretary General Kofi Annan in 2002. The peacekeeping mission in Western Sahara, he added, had done nothing but incur costs -- "almost half a billion dollars." Since then, the UN Security Council has routinely and automatically renewed the MINURSO mandate every six months. Still, the question as to who owns the region -- referred to by UN employees stationed there as the Big Sandbox -- remains an open one.

Moroccan Interior Minister Chakib Benmoussa, for his part, believes it is the wrong question to ask. Benmoussa, an advisor to King Mohammed VI, along with two state secretaries spent weeks traveling from Washington to Moscow, Paris and Beijing to explain the benefits of a partially autonomous Western Sahara to the rest of the world. Morocco has made resolving this long-standing conflict a prestige project. And Benmoussa argues that there is more at stake than just the ownership of a strip of desert.

Terrorists in the Sahara

"European security is at stake," he says. "We are talking about Islamist training camps and weapons smuggling in the middle of the Sahara. This is a huge area. Who should police it? The Polisario?"

This argument strikes a nerve with Western governments. European and American diplomats have long been convinced, and not just since the recent suicide bombings in North Africa, that Morocco can contribute to regional stability. Western intelligence agencies believe that the no-man's land between Algeria, Mali and Mauritania is a haven for Islamist terrorists.

They are further convinced that an independent Western Sahara state might be too weak to protect itself against terrorism emanating from the region. The hope is that an autonomous region under the Moroccan flag might be stronger. France and the United States, in particular, were quick to tout the autonomy plan as an "historic opportunity," "praiseworthy" and "constructive." Even the Spanish government of President Jose Luis Rodriguez Zapatero has recently taken Morocco's side. It appears that the Spaniards, facing a growing stream of refugees from Africa, are eager to work with the Moroccans.

Algeria, the Polisario's sponsor nation, is troubled by the development. Despite the fact that the government in Algiers sees a new phase of terror taking shape in its own country, the Algerians are too distrustful of their neighbor to the West to cooperate with the Moroccans, and they aren't keen on abandoning the Polisario and its leaders in Tindouf.

Brahim Laghzal was long a supporter of the Polisario. The 41-year-old Sahrawi stands furtively in the courtyard of the Parador Hotel in Ajun, a former officers' casino from the Spanish colonial days. He pulls nervously at his glasses and scans his surroundings before taking a seat. His behavior is habitual. In the past he would have avoided this place, which is still frequented by undercover agents working for the Moroccan interior ministry.

'Autonomy Is the Only Solution'

Laghzal was held in a military prison, where he was tortured because he was found in possession of Polisario propaganda materials. In December 1999, he went on a hunger strike to protest the detention conditions and the young King Mohammed VI pardoned him two years later. A new era seemed to be taking shape. The king set up a commission to investigate the gruesome human rights violations committed in his father's time, as well as to compensate the victims. It was the first time an Arab state attempted to publicly confront its past.

Today Laghzal sits on the same committee as some of his former enemies, the The Royal Advisory Council for Saharan Affairs. Even Laghzal, a former enemy of the state, is expected to take part in the autonomy negotiations, although no one likes what he has to say: "Morocco, under its current king, is on a democratic path, and this is our opportunity. But there are also risks. No one knows whether parts of the old political guard will regain power and jeopardize democracy."

Laghzal, a sociologist, no longer accepts the alternative, a state of Western Sahara governed by the Polisario. He believes that the separatists have gotten carried away and that the liberation movement, which was founded during the Cold War, has few democratic elements. The old tribal culture of the Sahrawi is destroyed, says Laghzal: "Autonomy is the only solution, as demonstrated by the Basques in Europe, the Catalans, the Scots and the Southern Tyroleans!"

Not everyone shares his confidence. "Morocco may have changed, but nothing has changed for us here in Western Sahara," says Brahim Dahan, a human rights activist in Ajun, who considers himself a supporter of the Polisario. Dahan, who sports a bushy beard, greets foreign journalists with the words: "Welcome to our country, even if it is occupied!"

His friend Asfari al-Naama, a lawyer, even believes that things are worse under Mohammed VI than under the former king, Hassan II. In the past, he says, Morocco at least treated the Sahrawis as equal adversaries in the war, but today Morocco is well on its way depleting the region's economic resources. According to Naama, so many settlers have streamed into the region from the north that Sahrawis are now a minority. "We cannot accept this. Our struggle must continue," he says.

Booming Economy in the Sand Dunes

The economic opportunities in the region are obvious. A Moroccan state-owned company mines about 2.4 million tons of phosphate a year in the desert region. The ore is transported from the mining town of Bu Craa to the Atlantic coast on a 100-kilometer (62-mile) conveyor belt. Factories in Casablanca later process it into artificial fertilizer; it is a lucrative business. Oil reserves are also believed to exist in Western Sahara.

Morocco invests more than $1 billion a year in the region. Within a few years Ajun, once a sleepy Spanish garrison town, was transformed into a growing industrial center with its own airport and soccer stadium. Lured by high salaries and tax breaks, business people, members of the military and administrative officials came to the region -- and so did corruption.

The Sahrawis have reacted to the changes with mixed feelings. While the Polisario fighters repeatedly shut down the phosphate mines in the past, others came to terms with the modernization offensive. One of them is Hassan Mulainin, the head of a development agency who sings the praises of Ajun as a business location. It takes all of 24 hours to establish a new company in Ajun, says Mulainin, and the literacy rate is well above the national average.

Morocco has done a lot, but the promised referendum over the status of Western Sahara has failed to materialize. Interior Minister Benmoussa has an explanation: "What exactly is a Sahrawi?" Benmoussa believes that it isn't even clear who would be entitled to vote in a referendum. Scattered across several countries, the nomadic inhabitants of the Sahara Desert have always been a people without borders, who were faced with the possibility of a country of their own in 1975 for the first time. The dispute, which revolves around various voter lists and the roughly 100,000 Moroccan settlers, has led to repeated postponements of the referendum.

At an event in the Algerian town of Tindouf to mark the 31st anniversary of the "Democratic Arab Republic of Sahara" in late February, Mohammed Abd al-Aziz, the head of Polisario and president of the virtual state, clarified his views on the Moroccan autonomy plan. After reviewing a military parade in front of about 1,000 infantry soldiers and a handful of camel cavalrymen, Aziz announced that his people would rather decide for themselves under whose flag they wished to live.

For many, the idea that the roughly 90,000 refugees in Tindouf will ever return to an independent desert state is only an illusion. Over in Ajun, Mayor Uld al-Rashid is already preparing for the post-Polisario days.