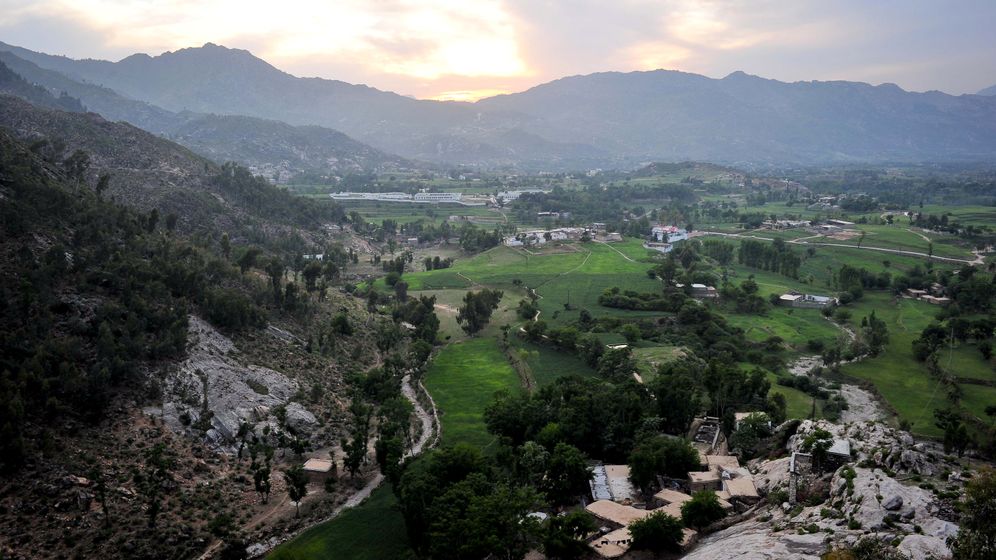 Faiz Ali Khan's hand are shaking as he pulls out his exercise book. The book is full of poems the 40-year-old has composed and he reads one aloud. It is a poem about springtime sunshine and freedom and peace.

Khan is a prisoner, an inmate at a "deradicalization center" for Taliban members in Pakistan's Swat Valley. A man with a graying beard, he wears a Pashtun hat, part of the prisoners' uniform. Khan is not particularly terrifying, striking an unimposing figure, his body slim and weak. His legs hurt, Khan says, and he hasn't done enough walking in recent days.

Khan is currently taking part in a computer course, where the inmates are learning to compose a text, then save and print it. It's nothing new for Khan, who worked as a journalist for the local newspaper before he was arrested, and who also holds a degree in law. "He's an educated man," says Major Waqas Akbar, who directs the deradicalization program here in Gulibagh, in the middle of the Swat Valley. The center is called "Rastoon," meaning "Place of the Right Path." There are other centers here in the Swat Valley -- another one for men, one for women and one for adolescents.

Several other inmates are hunched in front of computers in the same room, many finding the task more difficult than Khan, although they are considerably younger -- most are between 20 and 30. One man pecks away at the keyboard, using only his index finger, for several minutes. "I love you Hassan" is the end result on his computer screen. The men sitting next to him laugh when they read the sentence.

In the next room over, a sergeant is explaining what an electrical circuit is to a group of men. It's an effort for them to understand him, since their native language is Pashto, while the army uses Urdu.

Together with psychologists, officers here have spent months researching whether and how Taliban helpers and sympathizers could be deradicalized. They looked at programs in Saudi Arabia and in Yemen, learned about the reintegration of right-wing radicals in Denmark and Great Britain and studied how those who helped the Nazis during the Third Reich became democrats in the Federal Republic of Germany.

The result is a three-month deradicalization course that has been up and running for a year. The goal, Waqas says, is to "remove radical thoughts."

"We conduct very intensive one-on-one interviews, a total of six times over the course of 12 weeks, each time for five to six hours," explains Army psychologist Farrukh Akhtar, a diminutive, pleasant-seeming man. Akhtar also tries to find out to what degree the prisoners were perpetrators or victims. Akhtar has just come from a meeting with two men arrested because they'd had contact with a wanted terrorist. One of them even attended a Taliban training camp.

A "Holy War" with Paper and Pen

"What did you do there?" Akhtar asks him. As he talks to the men, he flips through files containing everything the army knows about the prisoners. Akhtar deliberately chooses not to wear a uniform, not wanting to further intimidate the men he questions, who are already distressed.

"They told me I should help build roads, Doctor."
"You didn't know you were supposed to dig trenches?"
"No."
"Is there anything you can tell us that was good about your time in the camp?"
The man considers the question. "Yes, actually, we always had something to eat."

An important part of the "de-Talibanization" process is religious instruction. "In any religion, there are various ways to interpret something. We want to set a few things straight there," Major Waqas explains. A "jihad," or "holy war," for example, can also be fought with paper and pen instead of weapons, he says.

More than 50 bearded men sit in a hall, listening to their teacher, a cleric. He is explaining, at length and with arm gestures, what makes a good Muslim.

Showcase Project for the Pakistani Army

"A devout Muslim respects his fellow humans," the teacher says.
The men nod.
"A devout Muslim doesn't misuse religion to exercise power."
The men nod again. The cleric speaks to them in Pashto, since it is imperative that they understand him.

"Our prisoners here in Gulibagh aren't hardcore terrorists," Major Waqas emphasizes. Khan the poet, for example, was just a hanger-on, a small fish. He was one of the people who allowed himself to be pressured by extremists who came to the valley in the fall of 2007, occupying it and seizing power. These extremists closed girls' schools, music shops and hairdressers' salons, and instituted Sharia law as the only valid legal system. "They went into every single house and demanded obedience," Khan recalls. Anyone who didn't obey was killed. The extremists had little difficulty overcoming the poor, uneducated local population. People in the Swat Valley still show videos on their cell phones of hanged people and bloody executions. "There was nothing else we could do but do what they demanded of us," Khan says in an apologetic tone.

When the army began a military operation in May 2009 to liberate the Swat Valley, once a vacation paradise, over 2 million people fled the violence. Barely half a year later, the region was considered liberated. Many thousands of people in the valley have since been arrested for their connections to the Taliban. "Almost all of them want to participate in the deradicalization program voluntarily, since freedom lies at the other end of it," Major Waqas says. Those who are released receive visits from soldiers every couple of weeks, to check how their resocialization is going.

The deradicalization program is a showcase project offered by an army that feels its fight against terrorism doesn't receive enough recognition internationally. Every Pakistani officer's repertoire includes the statement that Pakistan's armed forces have lost more soldiers in the war against terror since September 11, 2001, than all the Allies in Afghanistan put together.

Still, the army's success here in the Swat Valley has been tarnished by accusations of blatant human rights violations in the region. According to the accounts of some locals, the military acted brutally not only towards terrorists, but also their family members -- women and children -- in many cases killing them and destroying their houses. Videos of soldiers beating up defenseless people turn up regularly. The Human Rights Commission of Pakistan, an independent organization, has reported extrajudicial executions, illegal arrests, torture and expulsion. Human Rights Watch reported last year that there was "overwhelming evidence" the army had killed more than 200 Taliban sympathizers in the preceding eight months.

The military refutes these accusations. "No army is entirely free of rules violations," says Colonel Tarique Qadir of the army division responsible for the Swat Valley. "But we investigate the people's complaints very seriously and discipline soldiers rigorously when necessary." The word from army headquarters in Rawalpindi is that executions and torture "are not among the instruments we employ in the Swat Valley."

Having just begun his course, Faiz Ali Khan has two and a half months of deradicalization ahead of him. When he is released, he'll only need to walk a few blocks to reach the street where his house stands. Khan hopes he'll be able to work again as a journalist at the local newspaper -- and perhaps even publish his poems from his time in prison.