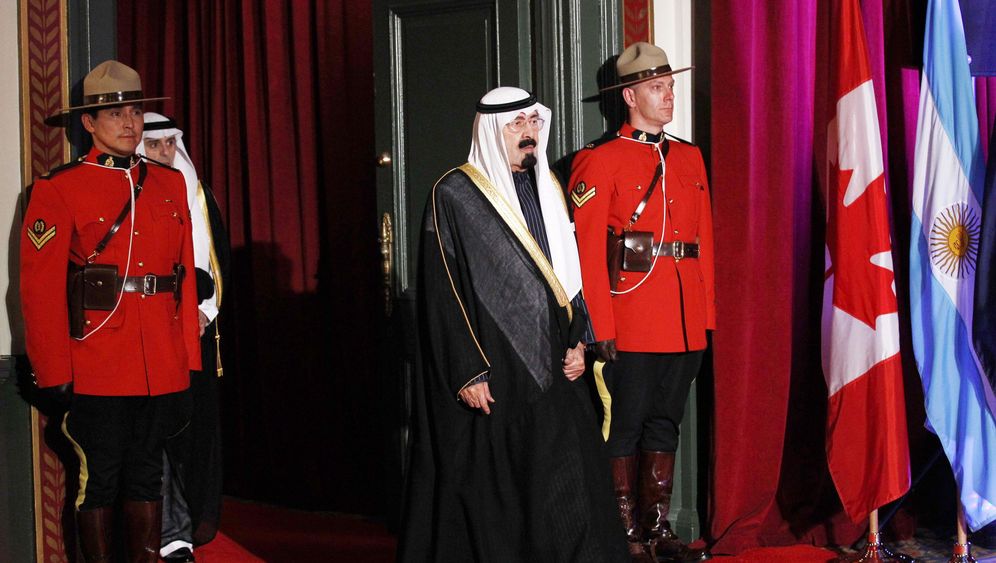 Photo Gallery: Not What it Seems

It is early in the morning on the wharfs in Sharjah, just below the Museum of Islamic Civilization, where the heavy wooden ships known as dhows are being loaded with cargo. Pakistani laborers hoist engine blocks, plasma monitors and mineral oil into the ships' holds. When asked where the dhows are headed, they say, matter-of-factly: "Iran."

Trade between the United Arab Emirates (UAE) and their neighbor across the Strait of Hormuz is an everyday occurrence that hardly deserves mention on the docks.

The same families are often on both shores. The business relationships between them have grown over generations and are more enduring than any war or embargo.

Of course, shipping engine blocks to the Iranian port city of Bandar-e Lengeh is not prohibited. But the busy import and export trade in the dhow ports of the emirates of Sharjah, Dubai and Ras al-Khaimah shows how difficult it is to isolate Tehran.

This makes the words uttered last Tuesday by the UAE's ambassador to the United States, Yousef Al Otaiba, in Aspen, Colorado, more than 12,500 kilometers to the west, all the more interesting. Otaiba was attending a forum at the Aspen Institute's Ideas Festival, and the mood was relaxed, or at least it was too relaxed for diplomatic restraint.

The discussion revolved around the Middle East. When asked whether the UAE would support a possible Israeli air strike against the regime in Tehran, Ambassador Otaiba said: "A military attack on Iran by whomever would be a disaster, but Iran with a nuclear weapon would be a bigger disaster."

These were unusually candid words. A military strike, the diplomat continued, would undoubtedly lead to a "backlash." "There will be problems of people protesting and rioting and very unhappy that there is an outside force attacking a Muslim country," he said.

Democratic Congresswoman Jane Harman said afterwards that she had never heard anything like it coming from an Arab government official. Otaiba, she added, was "astonishingly honest."

Notwithstanding the shocking nature of his remarks, Otaiba was merely expressing, in a public forum, "the standard position of many Arab countries," says Middle East expert Jeffrey Goldberg, a writer for The Atlantic Monthly who moderated the panel discussion in Aspen.

The fact that some Western politicians are unfamiliar with this position has to do with their own ignorance, and with the diplomatic skill with which the smaller Gulf states, in particular, have managed to hide their opposition to their powerful neighbor until now.

"The Jews and Arabs have been fighting for one hundred years. The Arabs and the Persians have been going at (it) for a thousand," argues Goldberg on The Atlantic's Web site.

Almost all Arab neighbors have a hostile relationship with the Islamic Republic. Saudi Arabia suspects Iran of stirring up the Shiite minority in its eastern provinces. The Arab emirates accuse Iran of occupying three islands in the Persian Gulf. Egypt has not had regular diplomatic relations with Iran since a street in Tehran was named after the murderer of former Egyptian President Anwar el-Sadat.

Jordanian King Abdullah II warns against the establishment of a "Shiite crescent" between Iran and Lebanon. And Kuwait, fearing the Iranians, installed the Patriot air defense missile system in the spring.

Arab governments are concerned about a strong Iran, its nuclear program and the inflammatory speeches of Iranian President Mahmoud Ahmadinejad. They share these concerns with another government in the Middle East -- Israel's.

Never have the strategic interests of the Jewish and Arab states been so closely aligned as they are today. While European and American security experts consistently characterize a military strike against Iran as "a last option," notable Arabs have long shared the views of Israel's ultra-nationalist foreign minister, Avigdor Lieberman. If no one else takes it upon himself to bomb Iran, Saudi cleric Mohsen al-Awaji told SPIEGEL, Israel will have to do it. "Israel's agenda has its limits," he said, noting that it is mainly concerned with securing its national existence. "But Iran's agenda is global."

Sometimes that agenda leads to actions that are as absurd as they are typical. In February, for example, Tehran issued a landing ban on all airlines that used the phrase "Arab Gulf" instead of "Persian Gulf" in their on-board programming.

But Arab countries are pursuing a delicate seesaw policy. The UAE cannot afford to openly offend Iran, which explains why Ambassador Otaiba was promptly ordered to return home on Wednesday.

This caution only conceals the deep divide between the Arabs and the Persians. Despite their public expressions of outrage over Israeli behavior, such as the blockade of the Gaza Strip, Arab countries in the region continue to pursue their pragmatic course. On June 12, The Times in London wrote that Saudi Arabia had recently "conducted tests to stand down its air defenses to enable Israeli jets to make a bombing raid on Iran's nuclear facilities" -- in the event of an attack on the nuclear power plant in Bushehr. In March, Western intelligence agencies reported that there were signs of secret negotiations between Jerusalem and Riyadh to discuss the possibility.

"We are aligned (with the United States) on every policy issue there is in the Middle East," Ambassador Otaiba said in Aspen.

"The UAE has chosen to side with the camp of those who apply to the letter the new United Nations resolution of June 9," wrote French philosopher Bernard-Henri Lévy, noting that it was "truly a blow to the regime" in Iran. For Lévy, the "union sacrée" of Muslim countries against the "Zionist enemy" is a fantasy. The countries that feel threatened by Tehran, he added, now have the opportunity to form an alliance of convenience.

Next to Jordan, the UAE is the only Arab country with soldiers deployed in Afghanistan -- fighting on the side of the United States. Abu Dhabi, the richest of the seven emirates, has reportedly been pressuring Dubai to keep closer tabs on the many influential Iranians living there.

In late June, the UAE's central bank froze 41 accounts, some of which could be directly linked to Iran's Revolutionary Guard. The accounts were allegedly being used to conduct transactions tied to the smuggling of materials listed under the embargo against Iran.

Before that, the UAE had announced tighter controls on ships in the Dubai free trade zone. "Security forces have interdicted scores of ships suspected of carrying illicit cargo," said Hamad Al Kaabi, the UAE's permanent representative to the International Atomic Energy Agency.

The Arab nations on the Gulf are pursuing realpolitik in their dealings with Iran. When in doubt, they come down on the side of the Americans, but they prefer to pursue the route of negotiation and trade. The ruler of a Gulf emirate recently told a delegation of senior European politicians: "The best way to handle the Iranians is to trade with them."