Misurata is a city where even photographers with lots of war-zone experience are having great difficulty doing their work. And nowhere is the danger greater than on Tripoli Street in the city center. Not so long ago, it was a place where people took care of their daily shopping. These days, it is a zone of death. It was on Tripoli Street on Wednesday that two of my colleagues lost their lives and two others were wounded. It was, I think, merely a question of time before something like that happened.

The Spanish photographer Guillermo Cervera, who was at the scene, told me how Tim Hetherington had died in his arms. He told me how bad the head wounds of Chris Hondros were. Guillermo said that the two were not felled by a rocket-propelled grenade attack, but by a fragmentation grenade. Michael Christopher Brown of the United States was wounded in the shoulder and chest. He had already been shot through the calf in Benghazi.

The conditions for photographers in the center of Misurata are almost indescribable. Every five minutes, a fragmentation grenade explodes. Gunfire comes from all directions. Snipers loyal to Libyan dictator Moammar Gadhafi are holed up in the houses on one side of the street. Rebel fighters are in the houses on the other side. I myself was on Tripoli Street on just a single occasion, for 30 minutes. Other colleagues have spent much more time there, despite the extreme risk of being hit. As happened to Tim Hetherington and Chris Hondros.

Crossing the Lines of Prudence

Many photographers, myself included, take such risks in the effort to capture the perfect image. We often cross the lines of prudence. 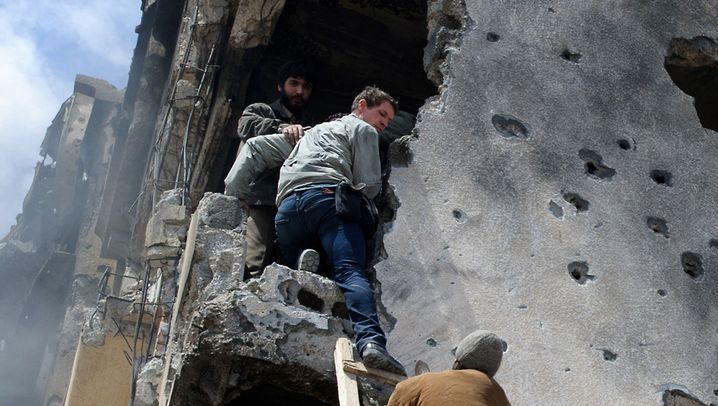 Photo Gallery: The Death of the War Photographers

The question as to what drives someone to take such risks is a difficult one to answer. Is the final result, a handful of striking photos, worth it? As a journalist, one wants to make a difference. I found that especially to be the case in Misurata. There were very few of us there, perhaps a total of 10 photographers. I convince myself that I am able to show to people outside of Libya what is really happening there. That I can show that which Gadhafi would prefer remained hidden: the pain and suffering of Libyan civilians. That is what gives me the feeling that my work can really have an effect. But can it really?

In battlegrounds like Misurata, we photographers are dependent on help from the rebels, who lead us through the city. Without their help, our freedom of movement is extremely limited. But the rebels also take us deep into the danger areas, because they want to show us the places where people are suffering the most. In some cases, we went too far for my liking, so that I would tell my companions to stop. Because I was, at the time, the only photographer in the city, it was easier.

But when one is traveling in a group, it can be advantageous, but it can also be a serious drawback. In a group of photographers, there is always someone who wants to go further, who wants to push the limits. And the others go along. Nobody wants to stay behind or show fear. It is a dynamic which can lead one to cross one's own boundaries. And in Misurata, there are no clear front lines. Death can come from anywhere, and it can target anyone.

In the eight days I have worked in Misurata, there have been four situations in which I could very well have become the victim. There were four times when I could have died. Two situations were particularly shocking:

There is no such thing as complete safety for us photographers, that much is clear. But one has to set limits. In Misurata, I would venture forward a little more every day to the point when I was eventually only standing 10 meters from a house crawling with 30 pro-Gadhafi snipers. The rebels were adamant about bringing me into a nearby building so that I could get a better view. So we took off running. You have to run everywhere to dodge the snipers. All of a sudden, we were being shot at by both sides. That's when I thought: Now I've gone too far.

You ask yourself why you do this, why you are in this kind of situation even though you already set some limits. You ask yourself whether you will ultimately have the courage to respect these limits and pull back if things get too dangerous. When you start to get nervous, it is time to turn back.

I was happy when I got out of Misurata. On that kind of assignment, you are under an enormous amount of stress. But you only really notice it when you're not in the situation anymore and all the tension has faded.

It's like Haiti in 2004, when some colleagues and I stumbled into an ambush. There were eight of us, but only four of us made it out again with our lives. I saw a colleague shot down right in front of my eyes. It was a traumatic experience, and it actually convinced me that I wasn't going to do anything like that ever again. I started studying to become a doctor.

But somehow, I ended up just as I started: as a photographer in crisis zones.

18 Bilder Photo Gallery: The Death of the War Photographers