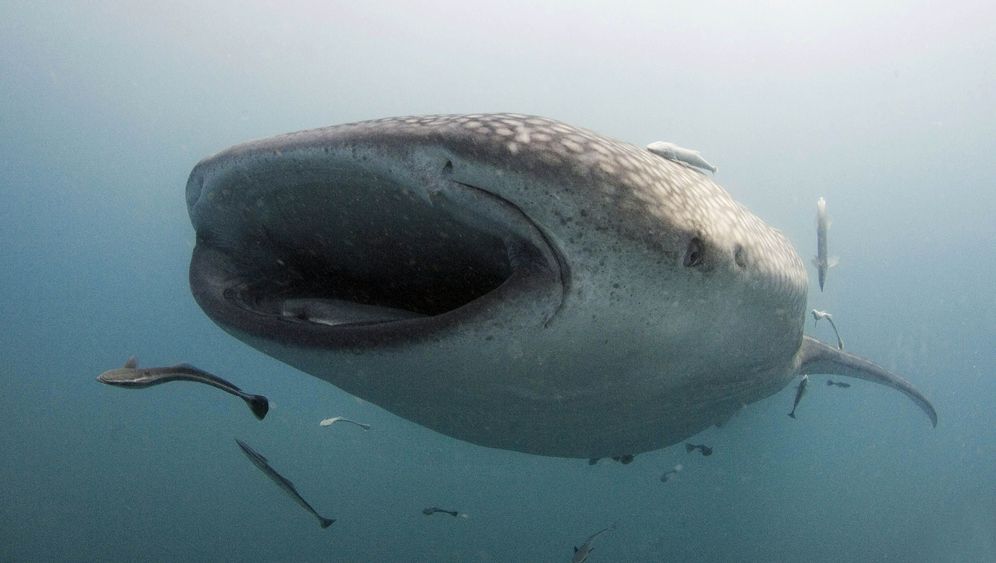 The forms that marine flora and fauna come in are varied and spectacular. From bizarre deep sea creatures to elegant predators and giant marine mammals, the diversity in our planet's oceans is astounding.

But it is the microscopic organisms like diatoms, green algae, dinoflagellates and cayanobacteria that make it all possible. Phytoplankton is the first link in the oceanic food chain. It is eaten by zooplankton which is in turn eaten by other animals, which are then consumed by yet further sea creatures. Sometimes that chain can be quite short -- the only thing that separates whales from phytoplankton in the food chain, for example, are the krill that come in between.

But it appears that humans may be in the process of destroying this fundamental link in the oceanic food chain. Temperatures on the surface of our oceans are rising because of climate change, resulting in a reduction of the stock of phytoplankton. Just how severe that reduction is, however, has long been a mystery.

Now, a frightening new study reveals the shocking degree of the die-off. Since 1899, the average global mass of phytoplankton has shrunk by 1 percent each year, an international research team reported in the latest issue of the journal Nature. Since 1950, phytoplankton has declined globally by about 40 percent.

"We had suspected this for a long time," Boris Worm, the author of the study for Dalhousie University in Halifax, Canada, told SPIEGEL ONLINE. "But these figures still surprised us." At this point, he said, one can only speculate as to what the repercussions might be. "In principal, though, we should assume that such a massive decline is already having tangible consequences," said Worm. He said that the lack of research on the food chain between phytoplankton and larger fish in the open ocean is a hindrance to knowing the extent of the damage.

'The Entire Food Chain Will Contract'

In other words, it could be that humans have not yet been affected. But Worm fears that will not remain the case for long. If the trend continues and the phytoplankton mass continues to shrink at a rate of 1 percent per year, the "entire food chain will contract," he predicts.

Worm's research has found that the problem is not merely limited to certain areas of the world's oceans. "This is global phenomenon that cannot be combatted regionally," Worm said.

The data show that the decline is happening in eight of the 10 regions studied. In one of the other two, the phytoplankton is disappearing even more quickly, while one region showed an increase. Both of the two exceptions are in the Indian Ocean. "We suspect other factors are influencing (developments) there," Worm says.

The situation in some coastal waters is different. In the North and Baltic Seas in Europe, for example, mass quantities of nutrients flow from land into the ocean. An enormous algae bloom in the Baltic has been the result this summer, but other microscopic organisms benefit as well. Still, coastal waters make up only a fraction of the total ocean.

Worm and his colleagues Daniel Boyce and Marion Lewis believe climate change is responsible for the disappearance of phytoplankton. In contrast to coastal areas, waters in the open sea are deeply stratified. Phytoplankton is found near the surface and gets its nourishment when cold and nutrient-rich water rises from the depths. "But when water on the upper surface gets warmer as a result of climate change, then it makes this mixing difficult," Worm explained. As a result, the phytoplankton can no longer get sufficient nutrients.

'So Serious It Is almost Unbelievable'

Other experts have also said they were struck by the sheer scale of the development. "A retreat of 40 percent in 60 years, that is so serious that it is almost unbelievable," says Heinz-Dieter Franke of the Biological Institute Helgoland, part of the Alfred Wegener Institute for Polar and Marine Research. He warned, however, against attributing the decline in phytoplankton solely to temperature increases. Higher temperatures, after all, could also result in more nutrients being delivered by air, he said. Other influences, like changes in cloud composition -- and thus changes in sunlight on the oceans' surface -- complicate the situation.

The negative effect warmer surface temperatures have had on phytoplankton has long been well-documented, says Worm, just not over extended time periods. Continuous satellite measurements have only been available for the last 12 years or so. The researchers had to collect multiple data sets, including those taken by Pietro Angelo Secchi in the 19th century. The Italian researcher and Jesuit priest was ordered by the Papal fleet to measure the translucency of the Mediterranean Sea.

The so-called Secchi disk is still used today to measure water transparency, and the old data he collected remains enormously valuable for marine biologists. "There is a direct corollary between the transparency of water and the density of phytoplankton," said Worm. The scientists also included measurements of micro-organisms as well as data about the ocean's chlorophyll content. All phytoplankton organisms create chlorophyll and it is possible to draw conclusions about the biomass using that data. In total, the team of researchers evaluated close to 450,000 data from measurements taken between 1899 and 2008.

That humans have done serious damage to the world's oceans is hardly a new finding. Over-fishing is an acute problem for several species with beloved types like blue fin tuna being threatened with extinction. Already, experts are warning that the world's fisheries could collapse by 2050. But the decline in phytoplankton could make the situation even worse.

Franke of the Alfred Wegener Institute said he fears the decline in phytoplankton will make itself particularly apparent in fisheries. "If the oceans' total productivity declines by 40 percent, then the yields of the fisheries must also retreat by the same amount," Franke told SPIEGEL ONLINE.

The loss of the oceans as a source of nutrients isn't the only threat to humans. Half of the oxygen produced by plants comes from phytoplankton. For a long time, scientists have been measuring an extremely small, but also constant decline in the oxygen content of the atmosphere. "So far, the use of fossil fuels has been discussed as a reason," said Worm. But it's possible that the loss of phytoplankton could also be a factor.

In addition, phytoplankton absorbs a huge amount of the greenhouse gas carbon dioxide each year. The disappearance of the microscopic organisms could further accelerate warming.