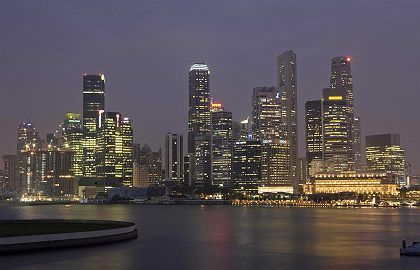 Nobody knows for sure how much sea levels will rise as a result of global warming. But rather than waiting to find out for sure, Singapore has already begun planning. According to a news report in the English-language paper Straits Times, the tiny island nation just off of Malaysia has contacted Dutch experts for help in building protective dikes.

The 663 square kilometer city-state has begun researching such technology, "because by the time the waters have risen (and) we want to start learning, that is too late," former prime minister Lee Kuan Yew said according to the paper. "So we have already got in touch with the Dutch, who know how to build dikes."

Lee, who is now part of the cabinet of his son, Prime Minister Lee Hsien Loong, said that the Singaporean government has already contacted the Netherlands-based research and consulting firm Delft Hydraulics, though the company on Tuesday was unable to immediately confirm that such an inquiry had been made. The company already enjoys close cooperation with Singapore in other areas including a research center recently established together with the National University of Singapore, according to a company spokeswoman.

Estimates as to just how high ocean levels will rise as a result of melting ice caps and warming (and thus expanding) ocean waters vary widely -- from just a few centimeters to up to six meters or even more. A number of coastal areas are potentially in danger and entire island nations, including Singapore, are threatened.

Indeed, the Netherlands, with its long history of reclaiming land located below sea level, appears ideally positioned to offer technical help for countries threatened by rising sea levels. Last autumn, a US delegation including the Louisiana Governor Kathleen Blanco and a number of US senators and business leaders traveled to Holland to learn more about dike and flood-control systems in the wake of Hurricane Katrina, which inundated New Orleans with massive flooding in 2005.