You're in bad shape, very bad shape. And when you arrive at the office, you are faced with a choice: You can be treated by a senior physician who speaks soothingly, is the senior expert in his field and seems to have years of experience. "I've been working as a doctor for 35 years," he says. "We'll find out what's wrong with you."

Do you trust him?

Or would you go with the resident, who has been licensed for three months and has virtually no experience on the job? The young doctor holds a tablet computer under his arm. "It provides me with access to 600 years of experience from chief physicians," he says. "Don't worry, we'll find out what's wrong with you."

In fact, that's not an unrealistic scenario. According to an estimate made by German statutory health insurer AOK, nearly 20,000 people die every year in Germany alone as a result of malpractice. It can take up to half a decade for the correct diagnosis of rare diseases to be found, and in the best-case scenario, the average doctor has only studied around 1,000 out of 30,000 known diseases by the time of his or her final examinations.

This could all change with the help of data and artificial intelligence -- at least that's the promise currently being made in the global health-care industry. Machine medicine, the data-assisted diagnosis and treatment of diseases, is on the verge of revolutionizing medicine more deeply than stethoscopes did in 1816, X-rays in 1895 or cranial MRIs in 1978. It's even fueling a kind of euphoria in speeches, at conferences and in the media. Hopes are high, and so are the financial stakes.

No other company has been doing as much to advertise its work in the area as IBM. The company is a global leader in the IT industry, and with "Watson," it has created what it purports to be a true supercomputer.

Armed with 90 computer servers, Watson managed to defeat record-holders on the quiz show "Jeopardy" in 2011. Watson even helps edit movie trailers by filtering out the best scenes without human intervention. IBM markets Watson applications for rail transportation and defense lawyers.

With its miraculous new weapon, the software giant also wants to revolutionize medicine, a global market worth trillions of dollars, an industry in which hope and disappointment are closely linked. The prospects for the technology are considerable. The product aims to tackle much bigger conditions than colds, aches or pains -- like cancer or ailments with mysterious, unexplainable symptoms.

The approach used by Watson sounds logical: Given that medical knowledge is doubling every three years, no doctor out can keep up with all the research, and each patient can provide an extremely large amount of individual health data. Watson searches these data and findings for relevance to an individual case in ways that no doctor could.

At least in theory.

The program has been tested in Germany at university hospitals in Giessen and Marburg in the central German state of Hesse. Both campuses are quite happy to now have put the experiment behind them.

Put into practice, the system proved a lot less intelligent than hoped. At first, it stumbled over even the simplest of symptoms. If the doctor input that the patient was suffering from chest pain, the system didn't even include heart attack, angina pectoris or a torn aorta in its list of most likely diagnoses. Instead, Watson thought a rare infectious disease might be behind the symptoms. The Marburg doctors' experiences with Watson are now being widely discussed in the world of medicine. Some are even questioning whether Watson is more of a marketing bluff by IBM than a crowning achievement in the world of artificial intelligence.

Stephan Holzinger, the CEO of Rhön-Klinikum AG, which owns the university hospital, offers a sober take on Watson. When he became head of Germany's fourth-largest hospital operator in February 2017, he traveled to Marburg to take a closer look at the Watson project. "The performance was unacceptable -- the medical understanding at IBM just wasn't there," Holzinger says. "The company hadn't even fed the guidelines provided by the professional medical associations into the system. I thought to myself: If we continue with this, it will be like investing in a Las Vegas show." And it wasn't money that most concerned the CEO. "IBM acted as if it had reinvented medicine from scratch. In reality, they were all gloss and didn't have a plan. Our experts had to take them by the hand," he says.

The executive terminated the project before it could be used by a single patient. Holzinger describes what then happened as follows: "IBM apparently saw us as an important showcase and worked with the people in charge at all levels."

For their part, officials at IBM speak of a "successful test" that has merely been ended.

In fact, the problems experienced with Watson in Marburg are a fundamental issue for IBM. One of the system's derided essential components is its language recognition, which is as essential as it is ín need of improvement. In Marburg, for example, patient documents, including letters from doctors and test results, were scanned. Watson searched them for keywords that might point to diagnoses or results.

Virtually all current software systems have difficulties with complex sentence structures. Negations, especially, are proving to be a real problem. A phrase like "could not be ruled out," which is used by doctors, is difficult for computer programs to interpret.

Doctors also have a penchant for writing in shorthand. This means that Watson must be trained to understand that "HR 75, SR, known BAV" stands for a normal heart rate of 75 and a known bicuspid aortic valve. Watson did relatively well after being taught, but complicated sentences remained a real challenge for IBM's software.

Not Ready for Prime Time

Watson isn't the only flawed medical assistance software. Other assistance systems, such as the Isabel Healthcare platform or Phenomizer, an online diagnostic system operated by Berlin's Charité university hospital, aren't producing perfect results either. IBM , however, has been trumpeting Watson's allegedly superior capabilities louder than the others.

What's more, the program fails to fulfill IBM's promises in its most important application: the treatment of cancer. People in this field have placed a great hope in supercomputers, because ever faster computers are making the decoding of the human genome more affordable. The greater the role genetics plays in the treatment of diseases, the more important such software will become -- because doctors quickly reach the limits of their capacities.

IBM says that's no problem for Watson. A patient's profile is entered into the supercomputer, which then searches all available medical science, including doctor's notes, clinical studies, guidelines, essays, medical records, case descriptions, signal paths and mutations. Once Watson has combed through all that data in the cloud, it provides treatment recommendations .

But even in oncology, some doctors quickly grew disappointed in the technology. "Watson couldn't even correctly identify common textbook treatments," says one doctor who used the system several times at the Memorial Sloan Kettering Cancer Center in New York. "We had patients who came with Internet printouts or references to commercials on YouTube in the hope of finally having their cancer successfully treated by a computer," she says, describing the insane atmosphere that ensued. "A good intern can often provide people with better treatment suggestions than Watson can in its current form," she says.

Starting in 2013, the MD Anderson Cancer Center in Houston, Texas, even spent $60 million working with IBM's Watson before abandoning the project three years later. That decision had been preceded by a barrage of accusations of missed deadlines, mismanagement and that the system had been a waste of money. Venture capitalist Chamath Palihapitiya has described Watson as "a joke." He says Google and Amazon have made a lot more progress in terms of artificial intelligence. The German Cancer Research Center in Heidelberg also decided not to renew its contract for a Watson project.

This presents not only an image problem for IBM, but also an economic one. Analysts at several institutions, including the investment bank Jefferies, have little faith in IBM when it comes to artificial intelligence. In the worst-case scenario, financial experts there say, the billions IBM has invested in the software may be a wash.

But officials at IBM believe Watson is on the path to success. "Watson for Oncology" is currently in use in more than 230 hospitals worldwide, compared to 150 a year ago, they say. The company also says an ever-growing number of scientific publications have noted the positive experiences doctors are having with Watson Health.

That's not surprising, either, given that cloud-based artificial intelligence represents a crucial part of the company's future business strategy. Over the next few years, IBM plans to invest billions of dollars in its health-care businesses. Only the financial industry is considered to be as bullish.

But the company's failure with Watson also raises some fundamental questions. How long will it take for artificial intelligence to become superior to the judgment of experienced doctors? And, more importantly: How can that be proven?

"There's a lot of anecdotal evidence of efficacy in digital medicine," says Martin Hirsch. The neuroscientist, who is working on the Ada medical app, says that classic scientific work in the sector is lacking. "We need studies," he says. "Good studies in which digital medicine must be compared with traditional treatments. And it is only at the point at which it is at least equally good that we should really be pushing for it."

Tobias Gantner, a doctor and digital entrepreneur from Cologne, has a similar take. "Basically, the idea behind Watson -- of being able to peer into the future with the help of a lot of data -- is very charming," he says. "But I don't think that IBM's marketing really reflects reality. We need real data before we can get serious about using these systems."

This much is clear: Software programs like Watson have the potential to massively transform the ways hospitals and medical clinics are operated -- that is, if they at some point get better than actual doctors. But it's not as if the clinics are going to be left empty when artificial intelligence arrives. There's more to patient care, after all, than interpreting measured values, evaluating genetic material and combing through databases. It requires trust, discussions, comfort and sometimes just a pat on the back.

As Harvard cardiologist Bernard Lown, puts it: When all else fails, I just talk to the patient. 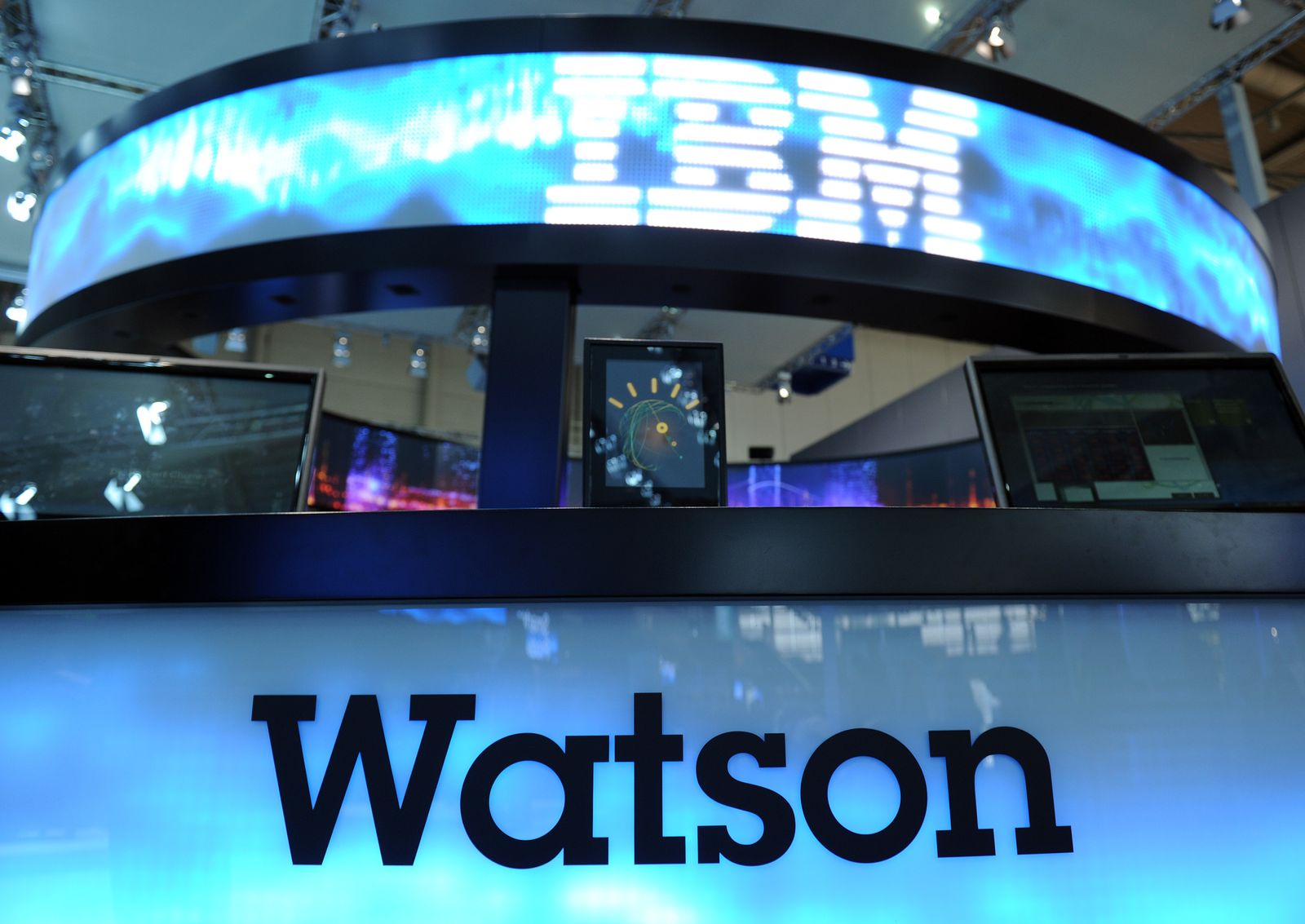 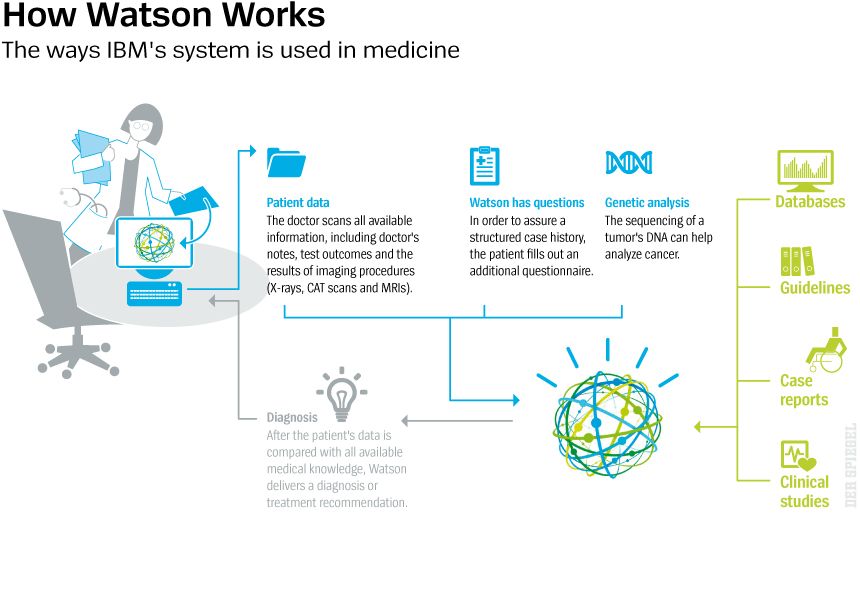 Graphic: How Watson is used