The two students from the University of Alberta, flying across the Arctic ice in a helicopter, were startled by what they saw below: a white dot and a brown dot on the ice. The biologists soon realized it was a grizzly bear next to a polar bear. The sighting was on Victoria Island, 500 kilometers (313 miles) from the grizzlies' normal habitat on the Canadian mainland.

The polar bear also struck them as a little strange. It had a dark stripe on its back, its snout looked dirty, its head was noticeably larger than normal, and there was a hump behind its shoulders, which is normally found only on brown bears. The paws looked as if the animal were wearing socks. The students had discovered a strange hybrid that goes by various names: grolar bear, pizzly or Nanulak, a combination of the two Inuit words for the animals' parents: polar bear (Nanuk) and grizzly (Aklak).

Two days later, on April 25, they spotted another strange-looking animal, probably also a hybrid. They also saw two other grizzlies. One was so fat that they believed it was feeding on seals, as polar bears do. Brown bears occasionally stray far north. But it's unusual for them to stay there, and it's even more unusual to find them mating with polar bears.

There have been hybrids in zoos, but their existence in the wild had for a long time only been speculated about. It isn't as if polar bears and brown bears never came into contact with one another, but their encounters were usually of the aggressive kind. In 2006, an American hunter shot an unusual-looking polar bear on Nelson Head, a cape in Canada's Northwest Territories.

DNA analysis established that the animal was the first recorded pizzly found in the wild. Another bear was shot on Victoria Island in 2010. This time it was an even greater sensation, because the animal was the offspring of a hybrid bear, which meant that it was already a second-generation pizzly.

The polar bear and the brown bear are considered to be two different species and, therefore, should not be capable of producing viable offspring. But the polar bear emerged as an offshoot from the bloodline of the brown bear only 600,000 years ago. Thus, in a sense the polar bear is basically a white brown bear. Five hybrids have been reported to date, all living on the archipelago surrounding Victoria Island. A small group of grizzlies have settled there, says Andrew Derocher, the two students' professor. The bears probably got there while pursuing reindeer in the winter, when the ice was frozen. When the ice melted in the summer, they stayed on the islands. They can find everything they need there, and the summers are also getting longer.

Scientists expect that climate change and environmental degradation will result in more hybrids in the future. The melting of polar ice is increasingly forcing polar bears onto dry land, while road construction and mining in southern Canada are pushing grizzlies north. This summer marked the most drastic melting of Arctic sea ice to date. Biologists fear that this will promote the development of hybrids. A 2010 essay in the journal Nature counted 34 species that could be affected. Populations whose habitats have been separated by masses of ice could interbreed: belugas with narwhals, largha seals with common seals, Greenland whales with North Pacific right whales.

"Hybridization will endanger polar biodiversity," the authors wrote. But why should it be unnatural for polar and brown bears to mate, merely because one species is white and the other brown? Hybrids are not unknown in nature. For instance, a finback and blue whale hybrid was caught that had been impregnated by a blue whale.

But scientists argue that the frequency of such hybridization is disconcerting. It's as if two groups had long been living separately, but in adjacent rooms, and suddenly man came along and pushed open the door between them. In the end, it's conceivable that only hybrids will survive. This is currently happening with coyotes and wolves in North America, as well as between two types of flying squirrel.

Another problem is that the offspring are infertile, the animals are expending unnecessary energy in raising their young without passing on their genes. For example, in the case of North Pacific right whales, whose numbers have dwindled to only 200, it would spell the extinction of the species. It is true that in evolution, not every mistake is necessarily a flaw. But hybrids are usually inferior to their parents, because they are not as well adapted to their environments.

A case in point is that of two hybrids born in a zoo in the northern German city of Osnabrück in 2004. Their coats were caramel-colored, and in many respects they were a combination of their father and mother. They move like polar bears when they catch seals, and yet the hybrids, with their shortened necks, aren't as proficient swimmers, and their long claws are poorly suited to ice. Canadian scientist Derocher doesn't believe that the pizzlies pose a threat to polar bears, because they are still too rare. Besides, he says, they are exposed to a unique kind of threat: Hybrids are not a protected species, because they are not considered polar bears. For hunters, on the other hand, their rarity makes them an especially coveted trophy. 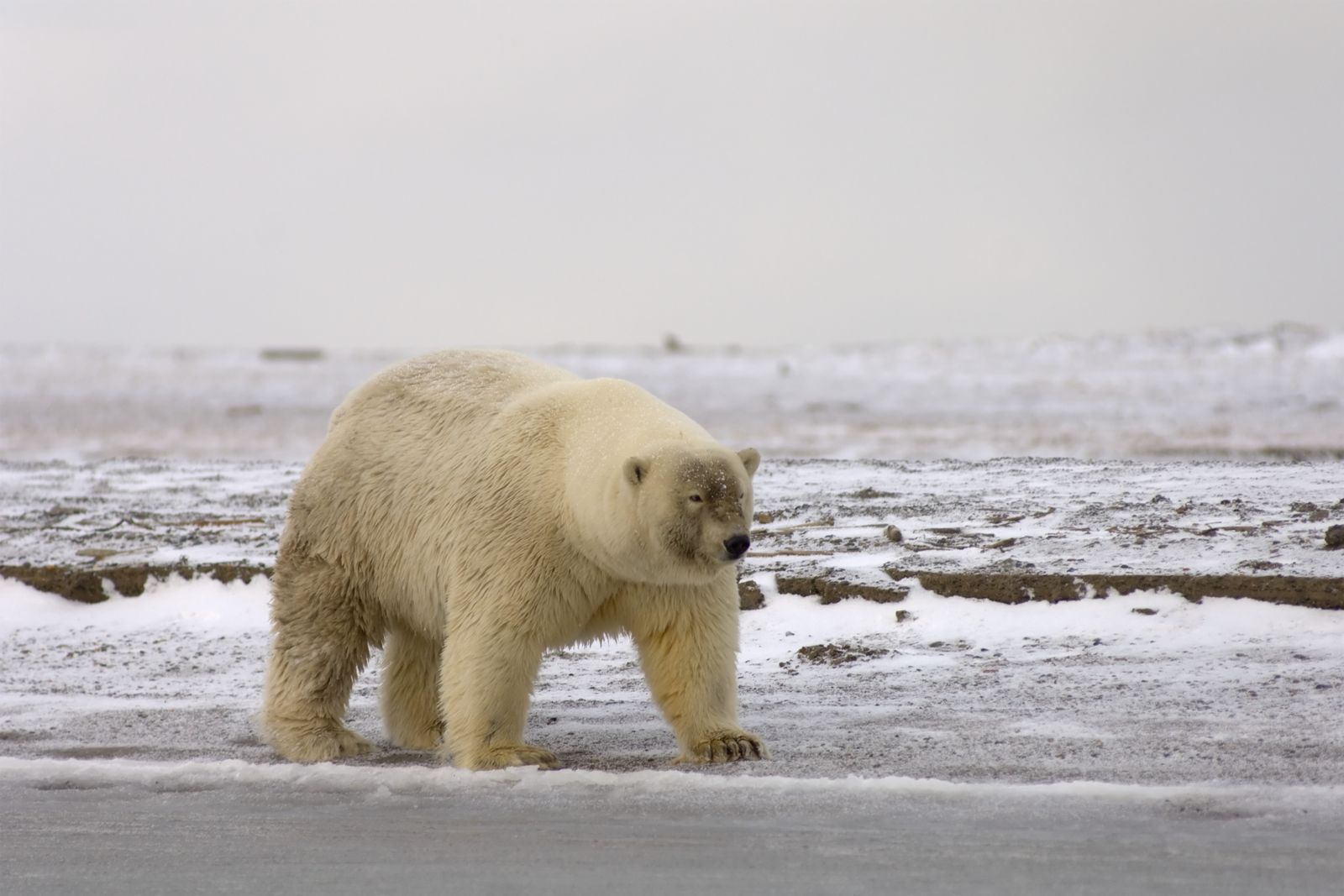 A bear believed to be a "pizzly," a hybrid between a polar bear and a grizzly bear.