This Wednesday, two worlds will meet in courtroom 4 of the High Court on Dedan Kimathi Avenue in Mombasa, Kenya. One is the German judicial system, represented by German diplomats, Frankfurt attorney Oliver Wallasch and his Berlin colleague, Andreas Schulz.

The second world is Kenyan, and it includes the local public prosecutor and the nine defendants, suspected African pirates. They will be brought to the courtroom from the Shimo la Tewa Prison, where the cells of the 3,500 inmates are infested with cockroaches and other vermin, and where malaria is endemic.

The two worlds normally have nothing to do with one another, but in this case the German attorneys and the African pirates are being brought together because of the anarchy in the Gulf of Aden that poses a serious threat to global shipping.

The seamen from Somalia are on trial for allegedly having attempted to hijack a vessel belonging to a German shipping company in early March. The suspected pirates were taken into custody by military personnel on board the German frigate Rheinland-Pfalz. Kenya, representing the international community, is now putting the men on trial, as part of an agreement reached between the European Union and the government in Nairobi. In return, the Kenyans hope to get speedboats, helicopters and modern fire trucks. The prisoners will be arraigned on Wednesday, and the main trial is set to begin on April 22.

The case is being observed in Berlin with a mixture of curiosity, suspicion and concern. If the trial falls apart or is not conducted in accordance with the rule of law, the authority of the German military's mission under the auspices of Europe's "Operation Atalanta" could be jeopardized. "A German-style trial is the litmus test for the operation," says Schulz. If Kenya proves unable to guarantee a clean and fair trial, "the agreement with the country will be in trouble," says Jürgen Trittin, a German Green Party politician who is monitoring the case. The Mombasa trial will reveal how realistic the German mission against the pirates is and how the country's navy should proceed in the future.

The incident that ultimately led to this trial began on March 3, 57 nautical miles off the coast of Yemen. The MV Courier, a freighter owned by the Hamburg-based shipping company Winter, was en route from the northern German port city of Bremen to the United Arab Emirates with a crew of 18. When the ship's radar system registered a signal at 8:50 a.m. local time, the weather in the Gulf of Aden was perfect, with a calm sea and good visibility.

Suddenly a skiff, a type of speedboat commonly used by pirates in the region, approached the ship's starboard side. The Filipino captain Willie Sulong broadcast a mayday message on the channel 16 VHF radio frequency and attempted to outrun his pursuers. The MV Courier turned to port and accelerated to 18.6 knots. The pirates, who were still half a nautical mile away, opened fire on the vessel with several Kalashnikovs and a bazooka. Their shots missed the ship, but the pirates did not desist from their attack. However, when an American helicopter arrived at the scene at 9:17 a.m., the attackers turned away and headed for Somalia.

The German frigate Rheinland-Pfalz, alarmed by the mayday call, had also sent a helicopter. The German chopper shot two salvos across the bow of the presumed pirates, but the bandits were not impressed. Only when the frigate approached close to their skiff did the Somalis surrender.

After being taken into custody, the group's leader told the Germans that he was a human trafficker from Somalia, and that the weapons were for "self-defense." But this seemed implausible to the German soldiers, who had noticed that "several of the people in the skiff were wearing gold watches," according to the German frigate's report on the incident. According to the report, the Somali sailors seemed unconcerned and were "unimpressed by our orders, lit cigarettes and talked to each other."

The frigate captain then proceeded to demonstrate that the German navy, though effective at sea, is relatively unversed in the requirements of modern criminal law. "The crew was taken into custody, the skiff was searched, and the weapons found in it were seized and then sunk in the ocean" -- for security reasons, as the captain put it. Since then, the most important pieces of evidence -- three bazookas, a Tokarev pistol, a carbine and a machine gun -- have been lying on the seafloor of the Gulf of Aden, at an estimated depth of 1,800 meters (5,900 feet).

The frigate captain's unauthorized disposal of the pirates' weapons has led to bad blood between the German government and the Kenyan judiciary. "The criticism was repeatedly made that important items used in the crime -- in other words, the weapons used -- where thrown into the ocean," read a cable from the German Embassy in Kenya. Photos, the German diplomats write, are only "secondary evidence." But to at least be able to include those photos in the investigation file, Kenyan police asked Germany's Federal Criminal Police Office for help. A color printer made available by German authorities will now be used to produce color printouts with which to impress the judge. 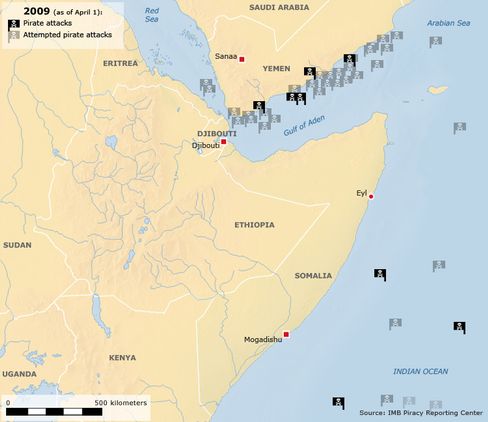 To save the case, Kenyan public prosecutors insist that several German soldiers testify as witnesses in Mombasa. The Germans' testimony is "urgently needed" so that the pirates can be convicted, German diplomats have reported to Berlin. But even that may not be enough to satisfy the judge. Because there is no written report by the MV Courier's captain, Willie Sulong, that would hold up in court, his personal appearance is "practically a sine qua non" for the prosecution's case, because not a single German soldier witnessed the attack. The German authorities have been charged with ensuring Sulong is present in court -- the ship does belong to a German shipping company, after all. The case will likely be dismissed if the captain does not appear.

At first, the trial was to be as much of an African matter as possible. The German navy sees itself merely as a sort of armed auxiliary police force that only intervenes when absolutely necessary. A group of senior diplomats discussed the issue in Berlin for months, hoping to prevent the problem from ultimately being dropped in the German government's lap.

But now that the German attorneys Schulz and Wallasch have come on the scene, it seems that this is precisely what will happen and it will indeed become a very German trial. The two attorneys have agreed to defend the nine men free of charge, and the case promises to attract international attention.

"The Kenyan courts do not even have jurisdiction," argues Wallasch, adding that moving the trial to Mombasa was an "impermissible outsourcing of the legal judge, which violates our constitution." After returning from Mombasa, the attorneys plan to petition to have the investigative proceedings moved to Hamburg, and they have already announced that exacting German standards will be applied, under which the prosecution will have to individually prove that each of the nine Somalis is in fact a pirate.

During initial questioning by the crew of the Rheinland-Pfalz, three of the suspects, Mohammed I., Mohammed A. and Mohamad D., claimed that they had boarded the skiff in Bosaso, Somalia, and had booked a passage to Yemen. They insisted that they knew nothing about the crew's alleged piracy activities. All three stated that the skipper had collected about $100 (€74) from each of them to be smuggled to Yemen.

There are many indications that the suspects' testimony is nothing but lies to cover themselves, but proving the contrary could be complicated. As if they had anticipated the potential difficulties the arrests could present, the German authorities were very careful to ensure that the prisoners' human rights were respected. According to a cable from the German Embassy, the Kenyan police "would have preferred to present the suspects to the assembled press (as criminals) when they left the ship. We opposed this request in order to protect their human rights."

The Somalis spent the first days after their arrest in a tent on the deck of the Rheinland-Pfalz, with a fan to keep them cool, meals prepared in accordance with Islamic dietary rules and daily prayer times for Muslims. "During those times," the diplomats noted, "even announcements on the ship's P.A. system were avoided."