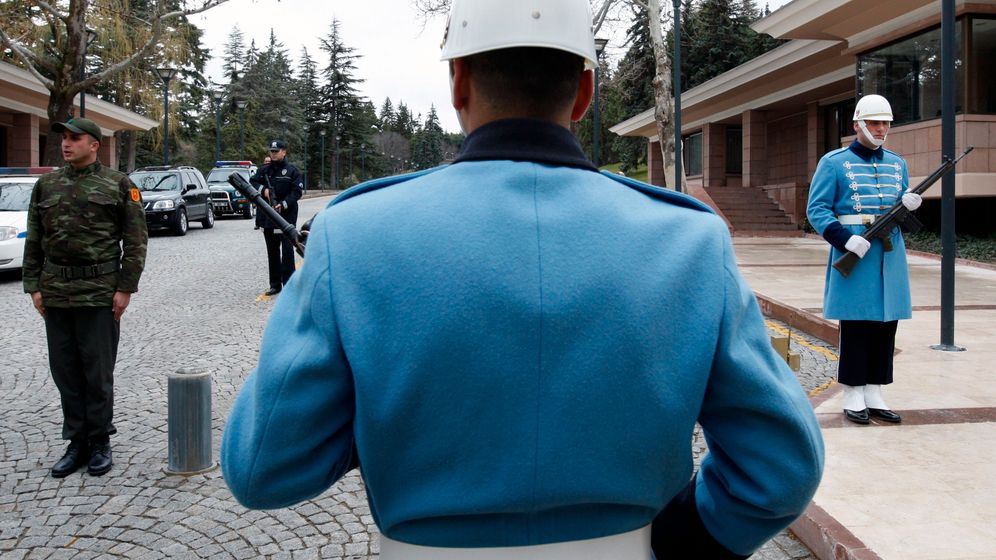 Photo Gallery: Erdogan and the Army

Four-star General Cetin Dogan, 69, has a fondness for luxury. Shortly before his retirement, the army veteran, who until five years ago was the commander of the First Army of the Turkish armed forces and a feared hawk, bought a three-story beach villa in the resort town of Bodrum on the Aegean Sea, where he intended to spend his golden years.

But that vision is not likely to materialize, at least not for the foreseeable future. Last Monday, police officers with Turkey's counter-terrorism force TEM searched Dogan's dream house. The general himself was arrested in Istanbul, where he was taken away in handcuffs. No one had ever treated him like that before.

Ibrahim Firtina, 67, was also taken by surprise. The heavyset four-star general, with his bushy, Leonid Brezhnev-style eyebrows, was the commander of the 60,000-member Turkish Air Force, the pride of Anatolia, for four years. Like Dogan, he too was considered a member of the country's top military brass, an untouchable "pasha."

That was until last Monday, when police rang the doorbell at his villa in Ankara. When the pasha opened the door in his robe, his wife called out: "What do they want from you?" "You are under arrest," one of the officers said. "You have half an hour to say goodbye. Please take only a few essentials with you."

At about the same time, a special task force paid a visit to Özden Örnek, 67. The retired commander-in-chief of the Turkish navy, a man who was considered highly talented from an early age, a high flyer his wife affectionately referred to as "Golden Boy," was worshipped like a demigod while in office. Even after going into retirement, Örnek was fond of wearing sparkling, white uniforms in public. The police officers took him into custody while he was having breakfast. "Excuse us, Admiral, but we must arrest you now," they said politely.

The charges against Firtina, Örnek, Dogan and 64 other retired and active senior officers who had been arrested throughout the country by last Friday are monstrous: Prosecutors in Istanbul claim that the suspects planned to blow up a popular mosque in the city and shoot down a Turkish fighter jet to provoke a military crisis with NATO partner Greece. Under Turkish criminal law the suspects, if found guilty of establishment of and membership in a terrorist organization, could face at least 15 years in prison.

Turkey has almost become accustomed to news like that. Images of raids and arrests of presumed conspirators against the government have been flickering across television screens for more than two years now. But in the most recent police operations on Monday and Friday, the targets were not, as in the past, obscure figures from the right-wing nationalist scene. This time investigators are taking on some of the highest-ranking generals of recent years, the self-proclaimed "guardians" of the legacy of Mustafa Kemal Atatürk, the founder of the modern Turkish state.

There have been four military coups in Turkey since 1960, and since the arrests many Turks have been wondering if the army would strike back. Had Prime Minister Recep Tayyip Erdogan gone too far?

At the moment, however, it doesn't seem as if the government is the least bit intimidated by the army. Erdogan continues to rule the country unchallenged. In fact, it is more the army that seems nervous. When he heard of the arrests, the Turkish army's chief of staff, General Ilker Basbug, immediately canceled a trip to Egypt. Meanwhile, the prime minister, who was on a trip to Spain, remained cool. "The judiciary is doing its work," he commented.

In fact, so far Feb. 22 marks the culmination of a power struggle between the conservative Islamic Erdogan government and the secular military in Turkey, possibly even a preliminary victory for Erdogan. "The untouchables have been touched!" the pro-government daily newspaper Zaman wrote in jubilation. "An operation without precedent in the history of the republic," the newspaper Sabah commented. Erdogan has so far managed to survive all attempts by the military and the courts to drive him out of office and is now in his strongest position in a long time.

The generals have been subdued. The fact that Basbug apologized to the prime minister two years ago when Erdogan's wife was denied entry to a military hospital because she was wearing a headscarf attests to a huge cultural turning point.

"Good news for Turkey, good news for democracy," says Istanbul journalist Mustafa Akyol, who points out that there is nothing more erroneous than the belief that the Turkish army was the guardian of democracy for decades. "The opposite is the case," says Akyol. "They deprived us of democracy."

The European Union, too, ought to be pleased. Hasn't it called upon the Turkish government for years to finally curtail the power of the military?

The Army Strikes Back

But if the Kemalist elite truly relented, it would the first time in the history of the republic. In fact, retaliatory measures already seem to be taking shape. For months, the Kemalists in the judiciary system are believed to have been preparing for a new trial with the intention of banning Erdogan's Justice and Development Party (AKP), and Abdurrahman Yalcinkaya, 59, Turkey's chief public prosecutor, is making sure that the word gets around. "The parties can sense whether or not they will be banned," he predicted in early January.

Yalcinkaya was also the one who filed the first petition, in 2008, to deprive the AKP of its power. He described it at the time as a "center of anti-secular activities." His petition initially failed before Turkey's constitutional court, but this clearly has not deterred Yalcinkaya. The son of a Kurdish family from southeastern Turkey and the grandson of a sheikh in the devout Naqshbandi order, he is seen as Turkey's most principled lawyer. He also keeps a watchful eye on his adversary, Erdogan, at all times.

"The senior members of the judiciary are afraid that their representatives could also be taken away in handcuffs," says Mustafa Sentop, a law professor. For this reason, a new petition to ban the party would be a welcome means of reining in the AKP. It would be the latest in a long series of attempts by lawyers and military officials to force Erdogan out of office.

Since his historic victory in the 2002 parliamentary election, Erdogan, who is the son of a seaman from the working-class Istanbul neighborhood of Kasimpasa and sees himself as an enlightened Islamist, has been a thorn in the side of the traditional governing elite. The more Erdogan managed to convince the West of his democratic intentions, the more the Kemalist establishment hated him.

An Assault on Modern Turkey

For the generals, much of what Erdogan has done is nothing short of an assault on the foundations of modern Turkey. He eliminated the notorious state security courts, allowed the Kurds to use their own language, pledged to resolve the dispute with Greece over Cyprus, and even had a draft constitution written up that would subject the military to civilian control.

But what could the military do to turn the tide? The generals quickly recognized that the legal and political tools for removing Erdogan were limited and that attempting to acquire power the old-fashioned way was no longer an option these days. The reputation of the Turkish army was on the line. "The days when the army would stage a coup are gone," General Ilker Basbug conceded.

Nevertheless, a small, ultra-nationalist group, which included some very high-up decision-makers, thought about ways to undermine the popular government.

In March 2007, the magazine Nokta published the conspirators' alleged plans, in the form of the so-called "coup diaries" of Navy Commander Özden Örnek.

Örnek claims that these notes are not authentic, and he was temporarily released last Thursday. According to the coup diaries, the presumed leader of the conspiracy, General Dogan, who is still in custody and was indicted Friday evening, was supposedly planning a remake of the brutal military coup of 1980. The arrest and detention of tens of thousands of "enemies of the state" in football stadiums were as much a part of the plot as the formation of a puppet government. Dogan's alleged grim scenario even had a name: "Sledgehammer."

Another plan, dubbed "Cage," included murders of non-Muslim minorities. Bombs were to be detonated in Christian and Jewish neighborhoods of Istanbul, and businesspeople were to be kidnapped. The goal was to ensure that the blame would be assigned to Islamists, and that the resulting massive pressure from abroad would force the administration to step down.

Although a spokesman for the Turkish army did not deny the existence of the "Sledgehammer" document, he described it as a "war game" typical of the military. The pro-government newspaper Zaman, calling this a weak excuse, wrote: "This plan is much too good to be just a game. Operation 'Sledgehammer' is the most detailed coup plan in the history of Turkey." The Kemalists' response seemed rather helpless by comparison. A retired officer, who chose to remain anonymous, calls it an "audacious smear campaign against secular Turkey."

Sedat Ergin, a journalist with the high-circulation daily Hürriyet, expresses himself more cautiously, noting that it is much too early to distinguish between fact and fiction. "There are too many documents at the moment, and their authenticity still has to be checked."

The fact is, however, that the Turkish military is under great pressure to investigate the accusations against the alleged conspirators within its own ranks. It needs to make its position clear. Things are getting tight for General Basbug, who insisted until recently that the coup plans were fabricated. During a meeting with Erdogan and President Abdullah Gül which was called last Thursday in a bid to reduce "tensions," Basbug promised to clear things up.

It is surprising, however, that the enthusiasm over the arrests voiced in the pro-government press has not caught on elsewhere, neither with the Turkish population nor with Europeans. Could this be because many Turks and Europeans don't completely trust the prime minister? Is Erdogan, who is probably the most powerful prime minister in the history of the Turkish republic, truly a flawless democrat?

Not according to some Turks. "We are being put under pressure," complains one trade union secretary. "Nowadays, people are only joining the pro-government, religiously oriented unions." An attorney says: "The Justice Ministry is doing its best to seat its own people on the appeals court." And a teacher reports: "They are in all key positions. We have city administrations loyal to the AKP, governors loyal to the AKP, district administrators, school principals and police officers." The journalist Burak Bekdil, a prominent critic of Erdogan, wonders what kind of a democracy Turkey can be if only the military is being democratized, while the AKP's people are being installed in all other sections of society. "Is that an Islamized democracy?" he asks.

Power belongs "in the hands of the people," Erdogan promised in a campaign speech a few years ago. He is of course right. But many Turks are now wondering which people he is referring to.