China's answer to Larry King wears a suit and tie instead of suspenders. His fame hasn't yet spread quite as far as the renowned CNN television host, but Yang Rui, 46, has come far in his long march through the media world. Beijing now wants to engage his help to break the media dominance of Western TV and to realign global opinion with its own.

It's still early in the morning at the television center in Beijing, and, since Yang doesn't host his "Dialogue" program until the evening, the star of CCTV-9, the English language channel at China's state-controlled television network, has time to talk about his mission. 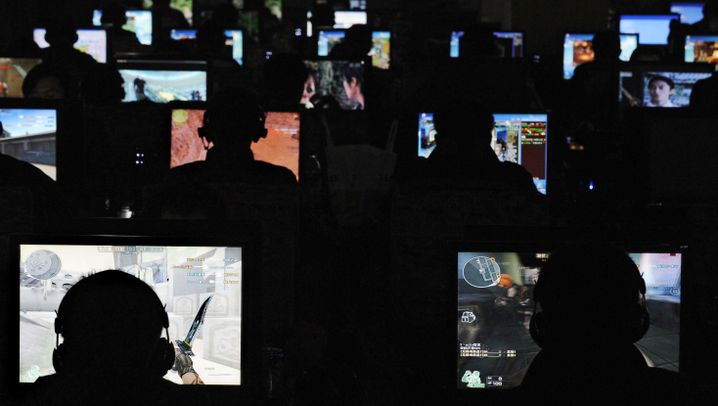 Yang says he wants to "enhance China's prestige in the world." The outside world, he complains, repeatedly criticizes China -- especially Western media that are obsessed with the sensational. He says Western journalists prefer listening to separatists who oppose Beijing rather than reporting the accomplishments of China's communist leadership in an "objective and balanced" way.

He speaks in a gentle, friendly manner -- in the precise English he learned as a student in Great Britain. Here too, outside the studio, he remains the consummate gentleman, never rising into the shrill tones favored by many a government spokesperson.

The Battle for Global Opinion

Yang embodies China's new ambitions. As Asia's leading power, China wants to become a global media player -- one focused above all on maintaining its own image. After the rebellion in Tibet last year and the public relations disaster surrounding the Olympic torch, Beijing recognized that it was no longer possible to retain control over its enormous empire only with police-state tactics directed at its own population.

Rather, the country's leadership decided, China needs to assert itself to the outside world -- and it believes that is best done with the help of a controlled media apparatus. And Beijing is fighting the battle for global opinion on three fronts:

Several TV networks already compete to deliver China's patriotic news to the world. The government's official press agency, Xinhua, supplies around 50 foreign media services such as Reuters and CNN with television news in English. This summer, several months earlier than planned, CCTV launched an Arabic language network for 22 countries with a total of 300 million potential viewers. The project was rushed due to the unrest in Xinjiang, as China tried to shore up support among Muslims following the brutal oppression of Muslim Uighurs in the autonomous region.

The state TV network also kicked off a Russian channel in September, with over 100 Chinese and 20 foreign employees. Spanish and French programming exists already, and a Portuguese language network is in the works. By late 2011, the media giant plans to include 10 global TV channels, including its own English language news network.

It is certainly not uncommon for Beijing to generate ambitious new plans, but the media offensive is being led by Hu Jintao, head of state and of the Communist Party, personally. Hu lamented last year, on the occasion of the 60th anniversary of the party organ People's Daily, that the West is strong and China is weak when it comes to international public opinion. And that, he said, has to change. "The battles in the fields of news and opinion will become more fierce and complicated," Hu predicted.

China does possess an important advantage over the West's crisis-plagued media industry in the coming propaganda war -- the Communist government's coffers are full. Beijing reportedly plans to pump the equivalent of €4.4 billion ($6.5 billion) into its global media campaign.

In addition, advertising revenue is rising at a good pace despite the recession. The giant CCTV network, which has recently completed a gigantic new headquarters in Beijing designed by Dutch star architect Rem Koolhaas, brought in €350 million in advertising in just the first quarter of this year. That may not sound like much compared to Western revenues, but it's 19 percent more than in the same period last year.

But despite the money, China faces high hurdles. Beijing's greatest disadvantages are its lack of experience with Western tastes and, above all, its state-run media, which are far from independent and often come across with a corresponding degree of implausibility.

One notable exception was Caijing, a financial magazine that consistently tested governmental boundaries with its exposés of corruption and misdoings in the business world. Last week, however, magazine founder and editor in chief Hu Shuli, 56, threw in the towel in the wake of a grueling internal power struggle.

More than journalistic skills, Beijing expects allegiance from its media representatives. "We must strengthen the party's leading role in radio, film, and television," declares Wang Taihua, director of the State Administration of Radio, Film, and Television. When CNN or BBC broadcast images critical of China, Beijing simply switches monitors to black.

Even within the country, the government station CCTV is often ridiculed for its crude propaganda. The evening news consists of a pair of stiff newscasters reading off party resolutions, which can go on for several minutes each. There is no advertising on the evening news, yet the program is interrupted twice -- first to celebrate "pioneers of time" and then to remember "heroes and role models of the people."

Higher-ups do allow the foreign language channels a little more latitude. Yang describes proudly how he invited two American professors onto his live program, where they argued against the death penalty. For Chinese standards, Yang showed a degree of courage. Nonetheless, he's still worlds away from a critical journalist's desire to provide the public with unbiased information.

On the Global Scene

More than anything, China's leadership wants to see its successes as a nation recognized. The same impulse inspired its opening spectacle at the 2008 Summer Olympics, meant to impress TV viewers the world over. Now Beijing is drawing more Western professionals from the PR and media industries into its services, to present itself even more perfectly on the global scene.

One example of these partnerships is 5CTV, a television network founded in 2008 by the Chinese governmental information authority together with American investors and launched at a fancy party in Los Angeles. William M. Campbell, chief executive officer of the new network, declared, "Our goal will be to bring China to the world, and the world to China."

Campbell, who headed Discovery Networks in the US until 2007, demonstrated how he plans to market China in an interview with Cai Wu, China's culture minister and the powerful former head of the state's Information Office. The American businessman placed his right hand submissively on his chest and asked the Chinese official "for some thoughts about 5CTV and for some advice I can share with our Western and American viewers."

The United States, however, is at most a sideline for Chinese strategists. A much more important region is the Middle East. China depends on countries there as suppliers of raw materials, but also as allies in the United Nations, as Yang explains. Beijing risked alienating Arab Muslims with its harsh treatment of the Muslim Uighurs; al-Qaida even threatened attacks on China in response. As a result, the country is attempting to persuade Arab viewers to see the benefits of China's policy on minorities.

On its new program, Chinese newscasters speaking in Arabic deliver the latest from China and around the world, and elaborate historical documentaries that recall friendly ties between China and the Arab world, for example through the Silk Road.

Meanwhile, this friendship offensive is being complemented by the ventures of private businessmen such as Wang Weisheng. Wang acquired an entertainment network in Dubai more than three years ago, then expanded it into the financial channel Arab Asia Business TV (AABTV). Now he broadcasts around the clock with bilingual information about the Chinese economy aimed at Arab businesspeople.

Gao Du, 36, head of AABTV, receives visitors in his TV studio in Hangzhou, not far from Shanghai. "We produce around 60 percent of our programming in China and the rest in Dubai," he explains. Next up is expansion into Europe and India. "We're thinking globally," he says.

Then there's Ye Maoxi, a media manager and real estate tycoon from Wenzhou in eastern China, who recently acquired the British satellite channel Propeller TV. Traveling in Europe this spring with Chinese premier Wen Jiabao, Ye learned of the channel's financial problems and decided to buy it.

Attacking separately, then triumphing collectively -- in the end this may just be the formula that allows China's new media giants to take over the world. Yang Rui, the TV anchor, comments, "when the United States wants to keep our country from advancement, they mobilize their private NGOs and criticize us on human rights and democracy. So why shouldn't our private businesspeople act on China's behalf?"

Yang is proud of what his country has achieved, and remembers clearly why he decided to become a journalist 26 years ago. He was studying in Shanghai at the time, when an official from the State Administration of Radio, Film, and Television came to recruit new talent. "She told us that foreigners imagine people with braids and bound feet when they think of us Chinese." Yang was shocked.

Now, he himself is the one presenting foreigners with a politically correct image of China. But he knows he can never quite measure up to the real Larry King at CNN. "He can get every star guest," Yang says. "After all, he knows them all." And the US has another advantage China will never be able to compete with: "They have Hollywood."