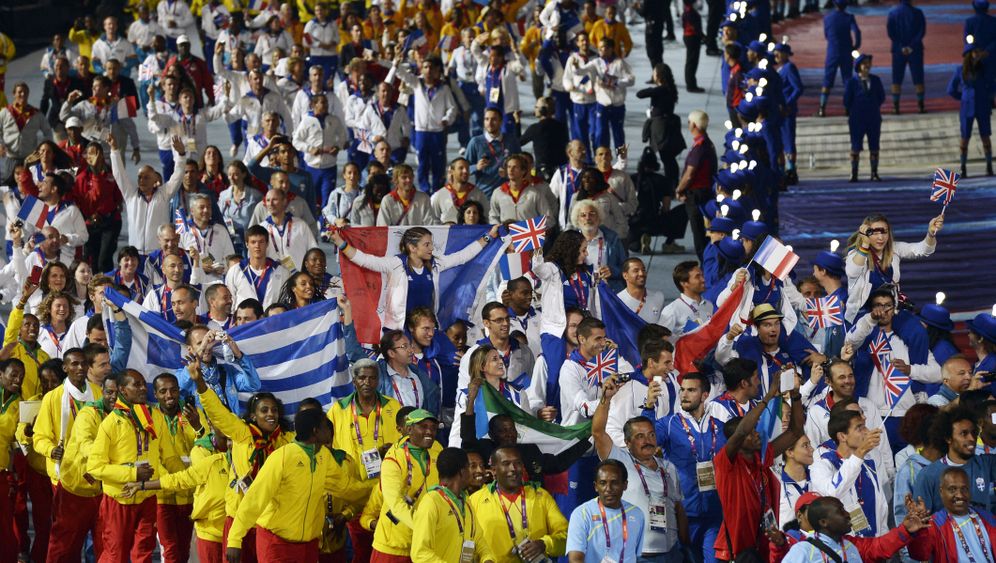 Kim Gavin, the artistic director of the Olympic closing ceremony, had promised it would be the "best after-party ever." He pulled out all the stops for Sunday's show and managed to carry on where director Danny Boyle's crazy opening ceremony had left off.

The three-hour show wasn't quite as spectacular as Boyle's masterpiece. Everything was a size smaller this time. Instead of the queen, Prince Harry was on hand to represent the royal family, and instead of Paul McCartney, there was just a video with John Lennon. And this time, Eric Idle of Monty Python fame, rather than Mr Bean, provided the obligatory injection of humor.

But it was still stunning. Great Britain presented itself as a world power of pop culture. Listening to the familiar songs performed by a bevy of stars in the Olympic Stadium, one found oneself wondering whether there's a world-famous band out there that isn't British.

The choice of music at time seemed a little outdated, which is inevitable if one is trying to present half a century of hits. In any case, the pop legends kept on coming. Grey-haired Queen guitarist Brian May fired up the arena with "We Will Rock You," Madness performed "Our House" and other top acts included Annie Lennox, George Michael, The Who, Muse, Jessie J, Pet Shop Boys, Take That and many others.

A Celebration of British Pop Culture

One of the highlights was the return of the Spice Girls who reunited for one evening, driven into the arena in London taxis and wearing glittering miniskirts.

The theme of the evening was a line from Shakespeare's "The Tempest" -- "this isle is full of noises" -- and the result was as colourful and chaotic as the opening ceremony.

It began with "Rush Hour," an ode to the bustling metropolis of London with its busy inhabitants, honking taxis and restless newspapers. The percussion artists of Stomp drummed in front of a backdrop of Big Ben and Tower Bridge. Suddenly a car exploded and a chubby Batman climbed out, accompanied of course by Robin. Then Madness appeared, performing on the back of a flatbed track driving around the arena, surrounded by picnicking children. It was deafening, entertaining and eccentric.

The stadium was an ocean of British flags, British bands and British supermodels including Naomi Campbell and Kate Moss. Hundreds of marshals wore light bulbs on their blue bowler hats and the 10,800 athletes became extras in this grand display of Britishness: They were rallied into the center of the stadium to form a gigantic Union Jack. Only the car brands were mostly foreign -- German, in fact.

The nation is going to miss these games. With every passing day, the British became more caught up in the sprit of the tournament. The country's athletes won a record number of 29 gold medals and came third in the medal tables behind the sporting superpowers US and China. The home crowd wouldn't have minded a show like this going on for a while longer.

The "Golden Games," as they were dubbed by the media here, have visibly improved the mood of the nation. "Self-deprecation had become a national inferiority complex. We thought we no longer did things well. Now we know different," the Times commented. "Much to everyone's surprise, they have been run with almost Germanic efficiency."

Opinion polls show that the majority of Britons regards the 9.3 billion pounds (€11.9 billion) in taxpayer money spent on the Games as a worthwhile investment. Conservatives have praised the new-found British patriotism that has made Scotland's separatist movement look petty and outdated. And the left wing is celebrating the image of a multicultural Britain shown in medal winners like Mo Farah, an immigrant from Somalia.

"Over the past couple of weeks we've looked in the mirror and we've liked what we have seen as a country," said Prime Minister David Cameron. The world liked it as well.