The images beaming around the globe these days are moving ones: People joining mass celebrations in Tripoli, falling into each other's arms and shedding tears of joy. Libya, it would seem, is following in the footsteps of Tunisia and Egypt.

Six months after the insurgency began and five months after the start of NATO air strikes, Moammar Gadhafi's brutal system finally appears to be imploding. Fighting continues in some areas, and the regime's fortifications are still being defended with tanks, but it appears to be only a matter of time before Gadhafi falls.

But what happens next? One thing is clear: An entirely new state will have to be created. Forty-two years of despotic leadership have left Libya with little to build upon. There are no democratic structures and there is no rule of law. Oil reserves might make Libya a potentially rich nation, but the economy and infrastructure are in a ruinous state. Old rivalries between the country's tribes are already flaring.

The Libyan National Transition Council, which hopes to lead the restructuring, will hardly be in a position to transform the country into a stable member of the global community without help. It is already dependent on massive support from outside, largely from Europe and the United States. But to what extent can the West intervene? With money alone, or possibly even with United Nations peacekeepers?

Excessive involvement in a country with large oil reserves can quickly create the impression that one is merely trying to gain access to those natural resources. That was one of the lessons of the Iraq war. But if too little aid is provided, then governments in Washington, Paris and elsewhere could be subject to accusations that they only wanted to get rid of an unwanted despot.

It is a difficult situation, and the only certainty is that the any further bloodshed must be prevented in the post-Gadhafi era. The country needs to be quickly helped back onto its feet, both politically and economically. Otherwise Libya could dissolve into a powder keg.

Western leaders are now contemplating Libya's future -- particularly in Paris, which largely led the international deployment against Gadhafi. At the moment, there is no talk of peacekeeping troops. The French government has proposed a quick meeting of the so-called Libya Contact Group, which is comprised of the countries that participated in the military operation. Germany, given its abstention in the United Nations vote to endorse a no-fly zone, is not a member of the group. The meeting could happen as soon as next week, and high on the agenda will be drafting a plan together with the National Transition Council for the international community's future role in Libya.

The European Union is likewise moving forward rapidly. "The way is now open for Libya for freedom and self-determination," European Commission President Jose Manuel Barroso and European Council President Herman Van Rompuy said in a joint statement. They added that Europe would make every endeavour it could to help, providing support for its democratic transition and economic reconstruction. The first step will be releasing the overseas assets of numerous Libyan financial institutions and oil firms that have been frozen because their owners had ties to the Gadhafi regime.

The German government has also signalled through numerous channels a readiness to help with Libya's reconstruction effort. The Libyans will be able to "count on Germany's support," and Berlin will engage itself "energetically," Steffen Seibert, spokesman to Chancellor Angela Merkel, said. Foreign Minister Guido Westerwelle has also spoken out in favor of releasing frozen funds "as quickly as possible" in order to facilitate Libya's reconstruction. In Germany alone, more the €7.2 billion ($10.4 billion) in Libyan assets have been frozen. Westerwelle's spokesman added that Germany could foresee providing assistance in areas like economic reconstruction and helping with preparations for democratic elections.

This desire to help isn't entirely selfless. German firms could stand to make a lot of money in Libya. In addition, the government in Berlin is still under pressure because of its abstention on last spring's Security Council vote and would like finally to score some points on the Libya issue. Berlin's decision in March not to participate in the military offensive not only irritated the National Transition Council, but also caused some diplomatic damage in Europe, particularly with France, Germany's close ally.

Now the country is likely to seek to compensate. And it is important to officials in Berlin not to create the impression that they are shirking any responsibility. Indeed, politicians in Germany are hoping for a second chance.

'There Has Been No Request for Soldiers'

Indeed, since Monday, there have been indications in Berlin that Chancellor Angela Merkel's government may even give "constructive consideration" to the idea of sending German troops to help stabilize Libya. As yet, there has been no formal request for such involvement, but the mere possibility has ruffled feathers in the German capital.

Particularly among the center-left opposition party, the Social Democrats. "This question isn't even on the table. There has been no request for soldiers," warned the SPD's parliamentary floor leader, Frank-Walter Steinmeier. His deputy in the party's parliamentary group, Gernot Erler, accused the Merkel administration of "needlessly" speculating over a possible armed deployment.

The Green Party, however, has indicated possible support for a peacekeeping force. Speaking to public broadcaster ZDF, national party co-leader Claudia Roth offered a formulation similar to the government's. She said her party would "very constructively" consider any request from the Libyan National Transitional Council for military assistance in stabilizing the country. She added, however, that it was still too early for any decision on the German military's participation in any UN deployment for civilian reconstruction.

Nevertheless, Roth said, Germany "also has a lot to do in order to restore its credibility." 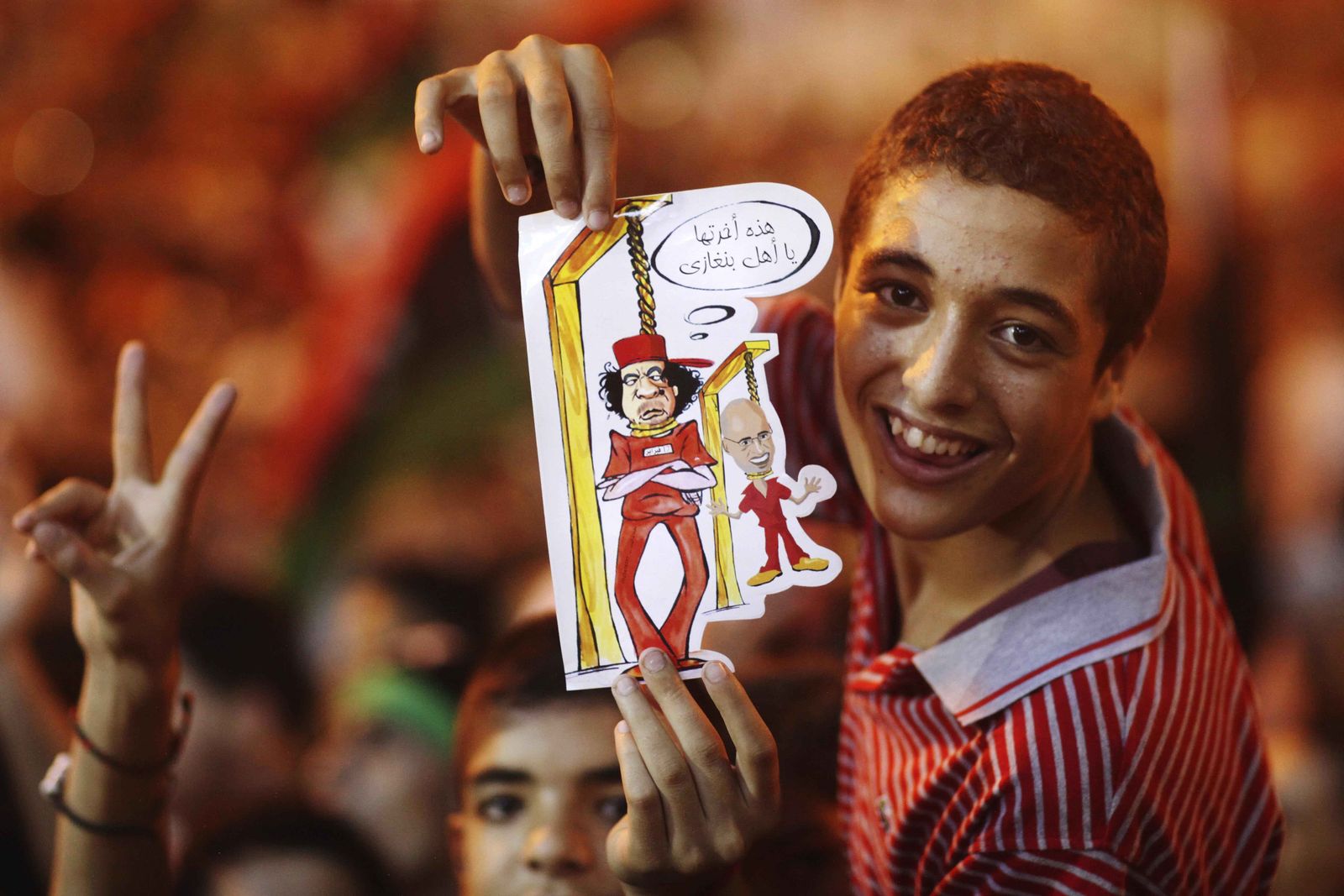 A boy holds a drawing depicting Moammar Gadhafi and his son Seif al-Islam being hanged during celebrations of the capture in Tripoli.