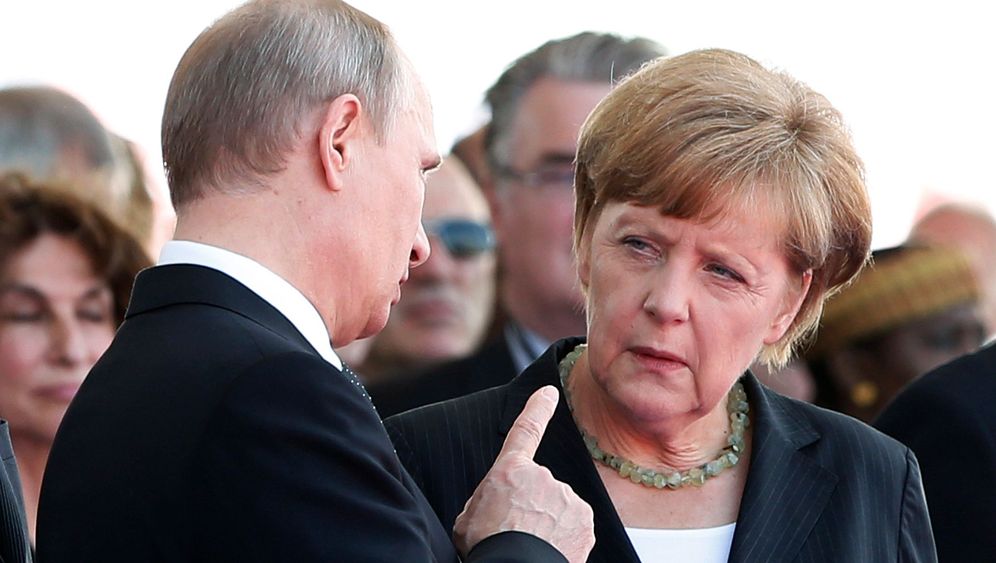 The official number is 25. That, according to the government, is how often German Chancellor Angela Merkel has spoken with Russian President Vladimir Putin on the telephone since last November. But there are estimates and evidence to suggest that there have been closer to 35 such chats. All of the conversations focused on Ukraine. A breakthrough was never achieved.

Merkel's relations with Putin are considered to be closer than those enjoyed by most other Western leader with the Russian president. Yet positive outcomes from those ties have been nonexistent.

The crisis in Eastern Europe, just two hours by plane from Berlin, is now entering its 10th month. What began with the collapse of an association agreement between the European Union and Ukraine can now be called a war. Heavy weapons are being deployed in the battle over cities and villages. Military reports speak of "strategically important highland." And each day, soldiers are dying -- some with and some without regular uniforms.

From the very beginning of this crisis, it was Merkel who used her relatively good relations with the Russian president to at least try to understand him, to convey different viewpoints and also to warn him. US President Barack Obama and the other Europeans also followed her lead.

Ultimately, though, the approach didn't achieve the necessary results.

No one within the EU or NATO is accusing Merkel of failing, but at the NATO summit this week, Merkel is likely to face some tough questions. Like why NATO partners should continue a dialogue with a man who often doesn't keep his word? And what happens if the constant tightening of sanctions doesn't make any impression on the Kremlin?

The crisis has reached the point the chancellor wanted to avoid all costs -- the point where military logic replaces diplomatic efforts. Putin appears to have gone even beyond this stage by allowing the deployment of Russian troops and their equipment into eastern Ukraine. Within NATO, pressure is growing on Merkel to change her approach.

Speaking on Friday, a spokesman for German Foreign Minister Frank-Walter Steinmeier unintentionally revealed the effect this pressure is already having on Berlin. "The foreign minister has anything but a bad conscience" for having attempted to find a diplomatic solution, he said. Meanwhile, during his regular press conference, Chancellor Merkel's spokesman Steffen Seibert spent minutes trying to avoid using the terms "war" or "invasion". Instead, he stuck with a wooden formulation in which he stated that reports from eastern Ukraine "add up to a military intervention".

Merkel and Steinmeier are facing a Russian leadership that appears to be toying with them. After prolonged pressure, Putin participated in an April conference that included the EU, the US and Ukraine. The closing statement read: "All illegal armed groups must be disarmed; all illegally seized buildings must be returned to legitimate owners." Of course, none of that has happened.

Later, in a telephone conversation with Merkel, Putin demanded a unilateral cease-fire, which the chancellor then pushed for in Kiev. After Ukrainian leaders finally agreed, Putin allowed pro-Russian rebels to capture several border crossings that have been since been used to facilitate transports of supply replenishments from Russia.

Weeks later, Putin dispatched his foreign minister to a meeting in Berlin. But as soon as he returned to Moscow, a Russian military convoy "got lost" and entered Ukrainian territory "by mistake." For weeks, Berlin has been trying to help establish the OSCE monitoring of the border, with the help of drones. Some 20 government officials in Berlin were trying to organize the equipment as well as the six-week training courses to use it. But those efforts could now be obsolete.

Those are only a few of the many hopes held by Berlin that have been dashed. The German government's Russia experts don't even want to venture a guess as to whether the deployment of Russian troops is part of a plan or just a spontaneous reaction to internal power struggles. Concerns are already mounting in Berlin that Putin may be seeking to create and partition off a corridor along the Black Sea coast running from the eastern Ukrainian border to Transnistria in the west -- in other words, through the southern Ukrainian provinces the Kremlin likes to call "New Russia".

That would provide Moscow with a land bridge to Crimea as well as a direct connection to the Russian separatists in Moldova's Transnistria region. Only two weeks ago, when Merkel made a short visit to Latvia, officials in Berlin assumed that Putin would be unable to implement such a plan. But things look different now.

In its helplessness, the status quo remains the German government's official reaction. Officials say Berlin is seeking a "diplomatic solution" and that it will continue to do so.

That could also include tighter "level three" sanctions that would impact entire business sectors and no longer just the more than 100 people, goods and companies that have been added to EU sanctions list. It would take time, though, for such sanctions to have an effect, one Merkel advisor admitted recently.

So will "Level Three" suffice or will something along the lines of a "Level Four" be required?

The answers to that will not come from the negotiating rooms at the European Union or during the kind of EU summit that took place last Saturday. They will be made by NATO. This week, leaders alliance member states will meet at the Celtic Manor hotel complex in Wales. Foreign and defense ministers are expected to attend as well as Ukrainian President Petro Poroshenko.

Thus far, Merkel's approach had enjoyed broad support within NATO. And she was able to ensure that Jens Stoltenberg, the smooth and diplomatic former prime minister of Norway, take over for outgoing NATO Secretary General Anders Fogh Rasmussen. But attitudes are shifting. With each new Russian provocation, the arguments in favor of confrontation are becoming more difficult to ignore.

For the first time in this conflict, the German government in August was forced to retreat from one of its prior positions. Poland and the Baltic states had demanded that resolutions for an increased NATO presence in their countries would not automatically expire after one year. The Eastern Europeans had succeeded in recent weeks in gaining the support of every other member state. Except for Germany.

At its Wales summit, the alliance intends to agree on the sending of one additional company each to Poland and the three Baltic states. Currently, the US plans to provide all of the 600 soldiers required. The German government has also declared internally that it would be prepared during the next rotation after six months to replace a company of between 100 and 120 soldiers. In addition, the NATO command in Szczecin, Poland, would be placed at a higher degree of readiness and would also be provided with new posts for which German troops have also been pledged.

For now, the red line for the alliance's increased presence in Eastern Europe is the 1997 Founding Act on Mutual Relations between NATO and Russia. It states that the alliance will not engage in "additional permanent stationing of substantial combat forces" in the areas of the former Eastern Bloc.

"Level Four" sanctions could include withdrawing from the treaty, but that would also increase the risk of falling into the kind of military logic of a new Cold War with Russia. This is exactly what Merkel would like to avoid, if only because she wants to spare the West from this final escalation for as long as possible.

Poland and the Baltic states are nevertheless still pushing for a demonstrative break with Moscow, and they are gaining increasing support for their position. They've also gained the backing of Canada, which is home to far more than 1 million people of Ukrainian origin. "Diplomacy is reaching its limits in the face of continued Russian aggression," says Luxembourg Foreign Minister Jean Asselborn. "It raises the question of whether one can still even achieve anything with Putin through negotiations." Several Eastern European governments have come to similar conclusions.

Government sources in Berlin say the United States appears to be undecided on the issue. At times officials there appear to be leaning toward the hardliners and at others the German position. President Obama is traveling to Estonia prior to the summit, and Washington's vote could be decisive.

Responding to the Threat

Given such variables, Berlin government sources say they are expecting that "a certain amount of dynamism" could develop at the summit. "Everything is going to be brought to the table again," says one high-ranking diplomat. Indeed, Putin's behavior is putting wind in the sails of those who would prefer to revoke the NATO-Russia treaty, despite all the risks doing so would entail. "We haven't gotten that far yet, but with each further military step taken by the Russians, it will become more difficult to assert the German position," he says.

Officially, NATO has declared that more than 1,000 Russian soldiers have been dispatched in eastern Ukraine to support the rebels. A separatist leader recently claimed that these men are volunteers who would rather spend their vacation at war than "on the beach" -- a statement seen in Berlin and elsewhere as an insult. Minor perhaps, but it contributes to a mood that could promote escalation.

"If developments continue like this, a political solution will become increasingly difficult," German Foreign Minister Steinmeier said on Friday. The deputy head of Merkel's conservatives in parliament, Andreas Schockenhoff, also demanded a decisive NATO reaction. "There's a new threat in Europe and we need to respond to it. NATO has to start concentrating more again on its original mandate: defense." Even if Ukraine isn't a NATO member state, it would still send a clear signal to Moscow, he says. Schockenhoff says he would also like to see additional NATO exercises in Eastern Europe to make clear to Russia that it is also capable of a rapid response. "NATO needs to show that it isn't toothless," he says.

The Ukrainian government already knows what kind of manifestation it would like to see of that new decisiveness: modern weapons for its army. To that end, the German government's spokesman said, "The German government isn't even thinking about weapons deliveries." But it's worth noting that he said the same thing at the beginning of August about northern Iraq. Within a period of less than five days, the government retreated from its position. On Monday, Germany's parliament approved a resolution by a broad majority to provide the Kurdish army in northern Iraq with 500 anti-tank rockets, 16,000 assault rifles and other weapons. 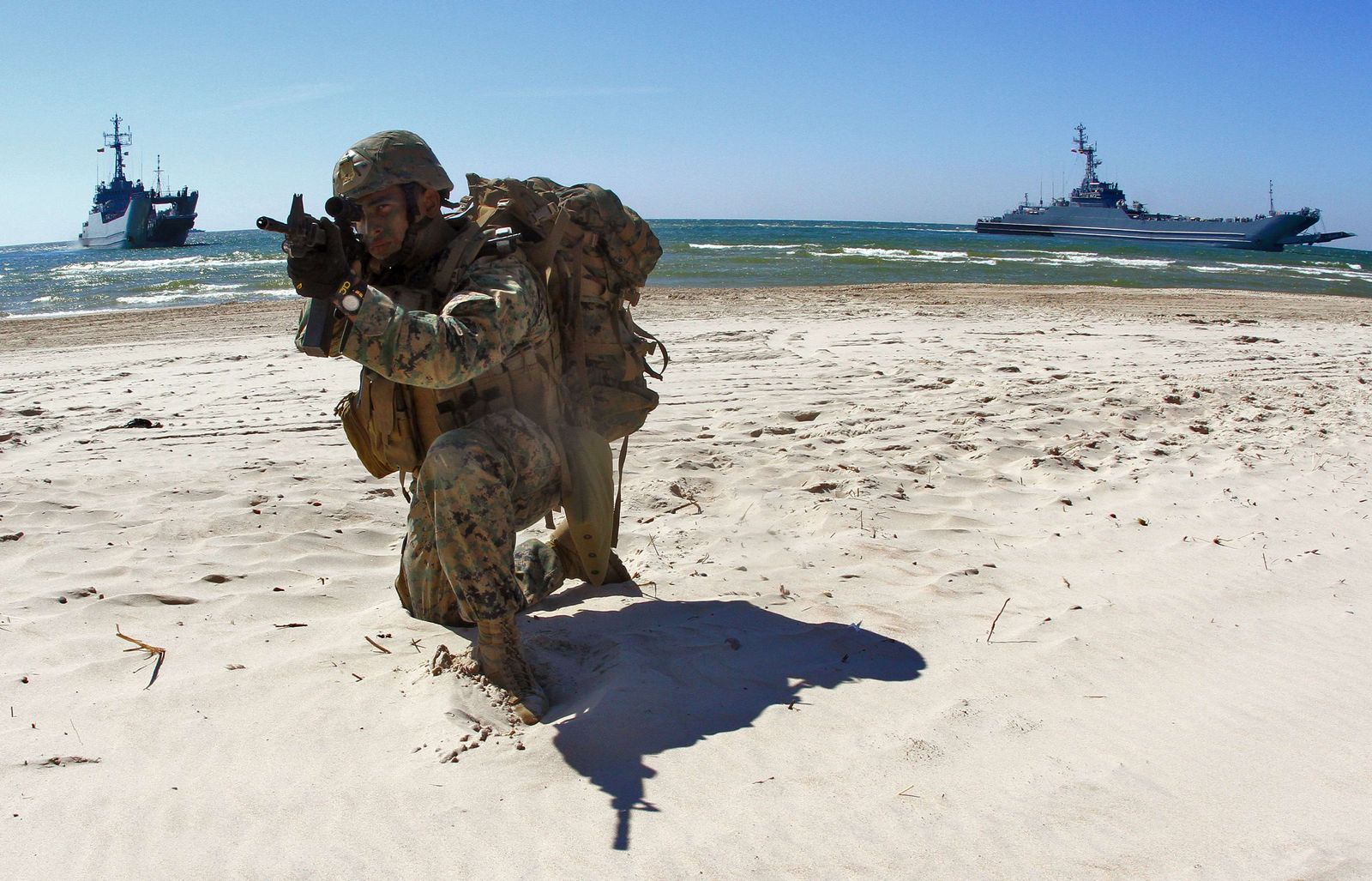 Some politicians in Germany are also saying they would like to see additional major NATO exercises conducted in Eastern Europe to send a strong message to Russia that the military alliance is capable of a rapid response if it is required. Here, US army troops conduct a landing operation in Nemirseta in Lithuania during the multinational 2012 BALTOPS NATO exercise.