"How was I?" James Mattis wanted to know. And his staff immediately knew what he meant. The new U.S. secretary of defense is not a narcissist egomaniac like his boss, Donald Trump. He only just started his job and he wanted honest feedback.

It went well, his team told him, following his hour-long meeting with German Defense Minister Ursula von der Leyen last Friday in the Pentagon. Mattis was friendly and polite, constantly referring to von der Leyen as "Madame Minister," as protocol demands. He demonstrated to his German counterpart that the Pentagon is now led by a retired four-star general who knows what he is talking about, is affable and is measured. A soothing contrast to the president in the White House.

But following the meeting, his staff believed there was one problem, and Mattis himself agreed. The visitor from Germany hadn't seemed to completely understand what he had meant. Mattis had opted for a polite formulation, saying diplomatically that there was a certain amount of "impatience" in Washington regarding the German contribution to the Western alliance. In other words: It's time to finally pay your share or things will get uncomfortable! It seemed as though von der Leyen had been lulled into complacency by the friendly atmosphere and hadn't recognized the urgency of Mattis' message.

At the NATO summit in Wales in 2014, the 28 NATO member states pledged to increase defense spending to the equivalent of 2 percent of gross domestic product (GDP). It was seen as one of the alliance's responses to the Russian annexation of Crimea. But most countries in the alliance are far away from meeting that target.

Aside from the U.S., only Britain, Poland, Greece and Estonia spend the requisite 2 percent and Germany is well behind, at just 1.2 percent. Washington has long been insisting that Germany finally deliver on its pledge, even before Donald Trump moved into the White House, but Berlin has always managed to stall. Now, though, the demands are becoming more insistent.

Nothing less than the future of NATO is at stake. For years, an aggressive Russia has presented a challenge on the alliance's eastern flank. More recently, though, the biggest danger appears to be coming from the West.

Taking Off the Kid Gloves

The new U.S. president has repeatedly said that NATO is "obsolete" and hinted that he would make the Article 5 principle of collective defense dependent on whether member states have paid their fair share. In the Baltic states and in Poland, the threats have come as a shock. But how seriously should Trump's comments be taken?

"We only ask that all of the NATO members make their full and proper financial contributions to the NATO alliance, which many of them have not been doing," the president said last week in a speech to U.S. troops in Florida. And his defense secretary has taken off the kid gloves since then.

At the meeting of NATO defense ministers in Brussels on Wednesday, the friendly Mr. Mattis delivered an ultimatum. "I owe it to you to give clarity on the political reality in the United States and to state the fair demand from my country's people in concrete terms," Mattis told his counterparts, reading from a prepared manuscript. "America will meet its responsibilities, but if your nations do not want to see America moderate its commitment to this Alliance, each of your capitals needs to show support for our common defense."

It was a clear threat that, if necessary, the U.S. might leave Europe alone to defend itself. By the end of the year, Mattis demanded, each country must present a plan for how it intends to achieve the 2 percent defense spending target. And to make sure there were no misunderstandings, Mattis passed out the text of his speech to the journalists traveling with him on his flight to Brussels.

German Defense Minister von der Leyen has now realized that her interpretation of the situation following her meeting with Mattis in Washington had been a bit too rosy and she was taken aback by the severity of his speech in Brussels. Still, though, she is still trying to sugarcoat the situation, pointing out that Mattis had read his speech word-for-word from a prepared manuscript, perhaps indicating that he was communicating the White House position and not his own.

The Pentagon, however, sees Germany as the economic powerhouse of Europe and a country that enjoyed a multibillion-euro budget surplus in 2016. Furthermore, Berlin has said that the country wants to take on more responsibility for global security, comments which haven't gone unnoticed in Washington. Why, then, isn't Berlin spending more on defense?

Mattis, of course, is under pressure. But that pressure doesn't just come from Trump and his ideologues in the White House. Members of Congress also aren't happy, having to explain to their voters that the U.S. has essentially spent years compensating for rich Germany's unwillingness to pay for its own defense.

It is becoming increasingly clear that things could soon become uncomfortable for Berlin. The Pentagon sees Germany as the most important country in Europe, the one that sets the tone on the Continent. If the Germans don't pay their share, U.S. defense officials believe, smaller European countries will follow suit, essentially hiding behind Berlin's coat tails. The pressure from Washington, in other words, is only going to grow in intensity.

Germany, of course, is not in an easy position. Politicians in Berlin are aware that their neighbors have long been skeptical, even fearful, of a militarily powerful Germany. That helps explain why German military spending in real terms ranks only third in Europe, behind the UK and France, despite being the Continent's strongest economy. Were Germany to meet the NATO target of spending 2 percent of GDP on defense, that would mean jacking up the annual defense budget from its current level of 37 billion euros to significantly over 60 billion euros. That would make Germany by far the largest military power on the Continent, which is likely a situation that would make many other Europeans nervous.

Furthermore, it isn't entirely clear how much political support the project has. While von der Leyen, a member of Chancellor Angela Merkel's Christian Democrats, is committed to reaching the NATO target, Rainer Arnold, the defense policy spokesman for the Social Democrats (SPD), believes that increasing German defense spending to 2 percent of GDP is "unrealistic." And increasingly, it is looking as though the SPD candidate for chancellor in autumn general elections, Martin Schulz, has a realistic chance of an upset victory over Merkel.

Still, at the Munich Security Conference on Friday, von der Leyen provided perhaps the clearest indication yet that Germany is intent on living up to its financial obligations agreed to in 2014, but also hinted that it will take time. In her speech at the conference, she repeatedly mentioned "burden sharing" and said "yes, we know that we must bear a larger, a fairer, share of the burden for trans-Atlantic security."

She also mentioned a few concrete numbers, including the fact that the German defense budget rose by 8 percent from 2016 to 2017 and she also referred to a plan she introduced last year for an investment package worth 130 billion euros. "We have to recognize that we must rapidly increase investments in both internal and external security in the coming years," she said.

Speaking not long after von der Leyen, German Finance Minister Wolfgang Schäuble seemed to indicate that he, too, would support increased military spending. "We will stick to our obligations," he said.

More money, though, does not automatically mean more and better equipment. Military procurement is notoriously inefficient, opaque and politicized in all countries and is thus susceptible to lobbyist manipulation. More money often makes the problem worse because more people begin angling for a slice of the pie.

Von der Leyen is well aware of that. A sudden increase in defense spending could reduce the pressure that she needs to push through her ambitious procurement reform package. Even now, the German military is having trouble spending its money sensibly. The structures are simply too complicated.

Into Battle with a Toothpick

Nobody is more aware of the problems than von der Leyen's armaments secretary Katrin Suder, a former McKinsey consultant. On a recent Tuesday afternoon, a pale-faced Suder, struggling to ignore her rising fever, sought to explain some of the problems facing procurement. The list includes, for example, the fact that the defense budget is the only one in the German government where each expenditure of over 25 million euros must be approved by the Budget Committee in German parliament. This limit has existed since 1981 and has never been adjusted for inflation. A limit of three times that amount would make more sense. The consequence, though, is that more and more expenditures exceed that limit and significant effort must be expended to push them through parliament, even if they are as politically irrelevant as a mobile crane.

Because of the regulation, an increasing number of purchasing decisions become the subject of political wrangling and experience significant delays -- even though the ministry almost always gets what it wants in the end.

The "annuality" of the budget also presents problems when, for example, large acquisitions are held up and must be delivered in the next year. If, for example, it becomes clear in the fall that a delivery of new A400 military transport planes won't be arriving in November as planned but only a few months later, the budget must be quickly revamped so that the money allotted doesn't go unspent.

During the last two years, Suder and her team have managed -- for the first time in several years -- to avoid having to send money allotted for the Defense Ministry back to the German treasury. But it hasn't been easy, and has been made even more difficult by the fact that a hiring freeze for the procurement office has been in place for 10 years, meaning the agency is short some 1,400 people. It will take years for new workers to be sufficiently trained.

If this situation doesn't change, the risk is significant that the system would collapse were defense spending to be ramped up. That, in turn, would mean that increasing the defense budget to 2 percent of GDP wouldn't be particularly effective. "It can be quite frustrating," Suder says. "Sometimes I feel as though I have been sent into battle with a toothpick." 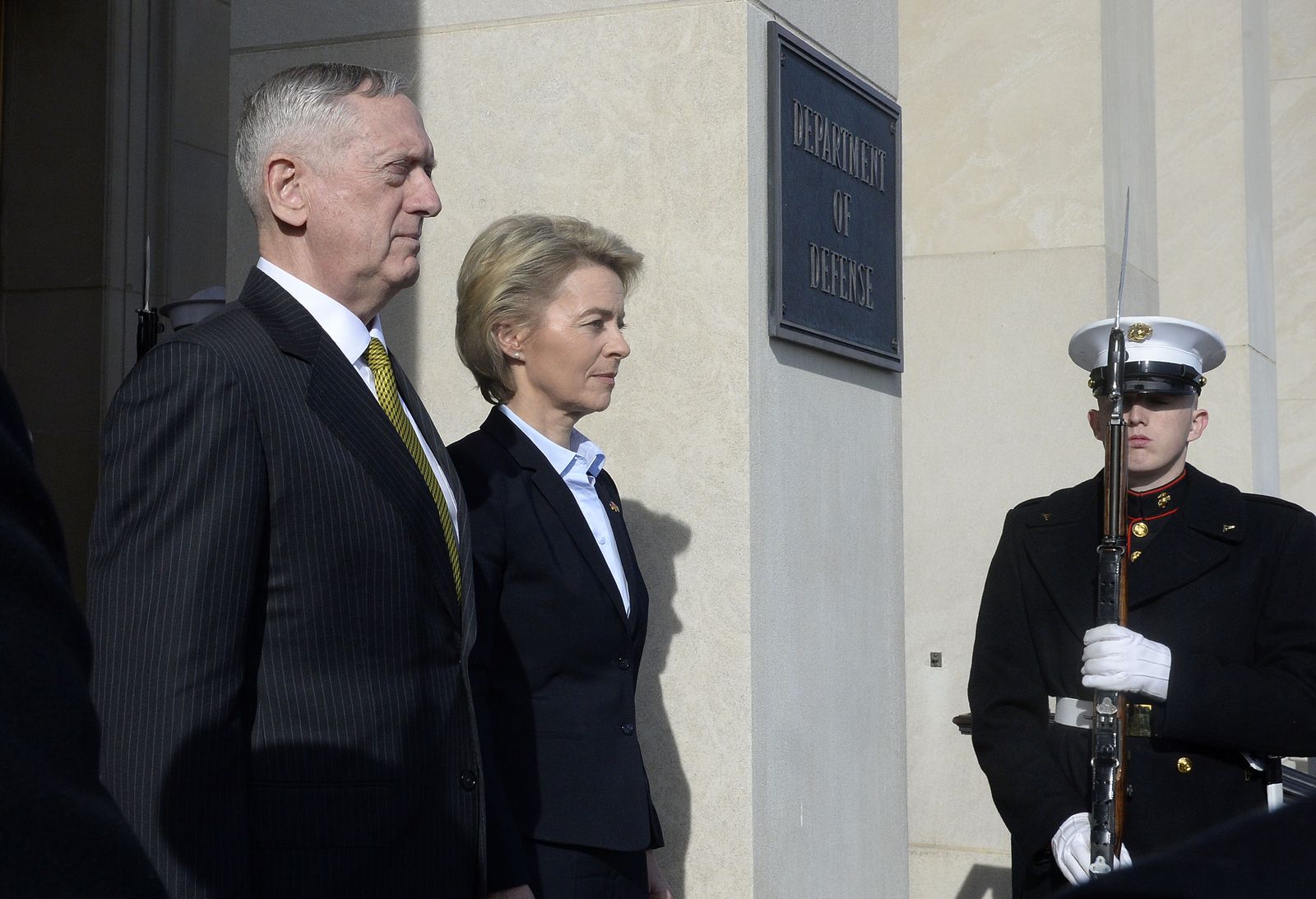 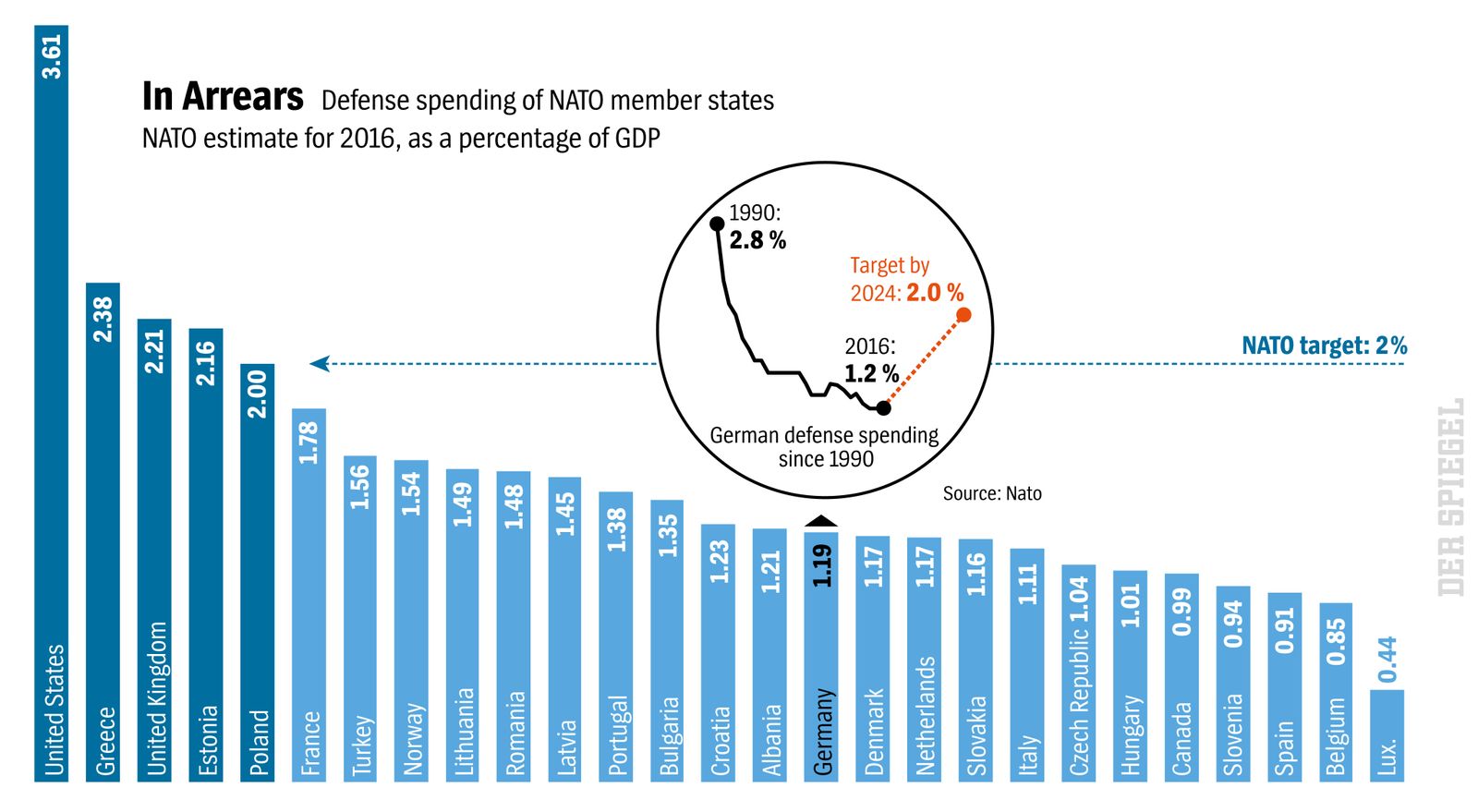