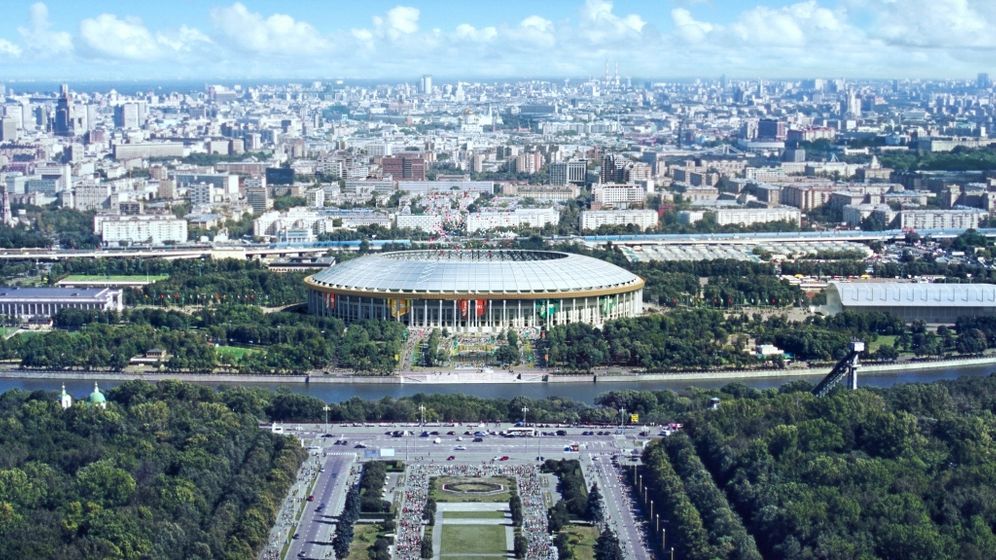 When Italian referee Nicola Rizzoli blew the whistle to start the World Cup final on Sunday night in Rio, a man with only marginal interest in football could be seen sitting in the VIP section: Vladimir Putin. The Russian president makes no secret of the fact that he's not a huge fan. He'd rather watch an ice hockey match.

Still, he attended the final in Brazil because his country will be hosting the World Cup the next time it is held, in 2018. It will become the third world-class sporting event to be hosted by Russia this decade, following the heels of the 2013 track and field IAAF World Championships and the Winter Olympics, held earlier this year in Sochi. In addition, Russia's first-ever Formula One race is scheduled to take place in Sochi in October. Russian Sport Minister Vitali Mutko has said he wants to make Russia the "center of the sporting world."

Hosting major sporting events is a way of demonstrating the country's strength, but it also offers Russia an opportunity to push forward with the urgent need to modernize its infrastructure. Seven out of 12 arenas planned for use in the World Cup must be newly built and two have to be thoroughly renovated. The price tag will not be small. After spending some €50 billion ($68 billion) on the expensive Winter Olympics in Sochi, Mutko's ministry estimates that Russia will spend €30 billion to host the 2018 World Cup. That's more than double what Brazil spent for this year's tournament.

And that's assuming things don't get even costlier. But bad planning and presumed corruption have begun driving costs upward. Indeed, researchers at the University of Zurich have concluded that the Russian World Cup will be the most expensive ever, on a price-per-seat basis.

Here is how Russia compares:

The World Cup stadium in St. Petersburg is expected to be the most expensive, with a cost of $16,500 for each of the around 70,000 spectator seats. The stadium has been under construction since 2007 and was originally scheduled for opening at the end of 2008, but it has been beset by delays. And costs have skyrocketed: It was supposed to cost $415 million, but current reports indicate the price tag has risen to as high as $1.2 billion. The opening is now planned for 2016. To be on the safe side, the city of St. Petersburg recently even considered constructing a back-up stadium with 25,000 seats just in case -- a site that could then be used by the second team of Russian Premier League club Zenit St. Petersburg after the tournament.

The problems with the stadium in St. Petersburg are not an isolated case. In December, a report in the daily Vedomosti startled the public with news that renovations of the venerable Moscow Olympic Stadium, originally estimated at $2.5 billion, could get even more expensive. The plans have since been slimmed down, with costs now only expected to be about $650 million.

Another problem is that many stadiums will be of little use after the tournament. The smallest World Cup arena is expected to hold 42,000 spectators, while the average attendance at Russian Premier League matches being a paltry 12,000. Besides, four cities hosting World Cup matches aren't even home to Premier League teams. "With the economic outlook for Russia darkening, the World Cup 2018 is likely to become deadweight to Russian economic development through the misallocation of scarce resources," Martin Müller, a professor at the University of Zurich wrote in his introduction to the June report.

Sports Minister Mutko recently sought to put a stop to the cost overruns, saying that no stadium should cost more than 15 billion rubles, or approximately $440 million. Influential construction company owners are already rebelling against his demand, in particular Gennady Timchenko, the owner of Russian engineering and construction company Stroytransgaz.

Stoytransgaz is demanding 35 percent more money for the stadiums than Mutko is offering. It remains uncertain whether the sports minister can prevail. Timchenko first rose the ranks to join Russia's oligarchs during the Putin era and members of the political opposition in Moscow don't believe that to be a coincidence. Timchenko has been a good acquaintance of Putin's for years.

When FIFA awarded the World Cup to Russia in 2010, a leading advisor to then President Dmitri Medvedev tweeted, "Dawaite bes otkatow," in Russian. Loosely translated, it means, "let's try to avoid corruption this time." There's much to suggest this was little more than a pious hope.