On Tuesday, five days after the Fukushima disaster, Japanese Prime Minister Kan Naoto, 64, finally lost his patience. He stepped into his limousine and was driven to the headquarters of Tokyo Electric Power Company (Tepco) in the Japanese capital city. "What is going on here?" he screamed at the flabbergasted executives responsible for the out-of-control Fukushima power plant. "We are depending on you, don't even think about retreating -- pull yourselves together."

Desperation is spreading in Tokyo's government quarters. Finally, Kan has moved to create a joint crisis team comprised of his cabinet and Tepco executives. It appears now that, after days of confusion over responsibility and the constant downplaying and hush-up of the danger through Tepco, but also through his own government, Kan now wants to get things under control.

That is, if it isn't already too late. A short time later, Kan addressed the Japanese people, preparing them for possible new radiation leaks at the nuclear power plant. He said the residents located within a 30-kilometer (around 19 miles) radius of the Fukushima plant should remain indoors. Previously, those measures had only been imposed over a 20-kilometer radius.

Japanese Wait in Vain for Information on Nuclear Disaster

With the nerve-wrecking leisureliness of a Japanese tea ceremony, Tokyo is finally beginning to explain to its people the gravity of the situation in Fukushima. And to the rest of the world. On Monday, it became known that several countries have criticized Japan's information management. The International Atomic Energy Agency (IAEA), unsolicited, has said it wants to dispatch an expert commission to Japan. 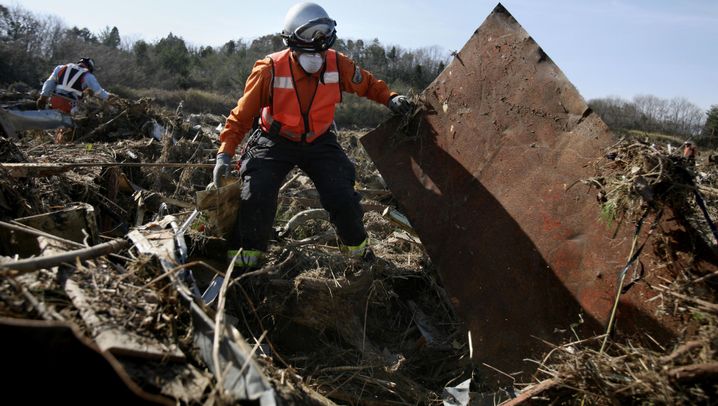 Photo Gallery: Japan Scrambles to Save Its Citizens

Even Kan's chief cabinet secretary, Yukio Edano -- who had sought to play down the threat of nuclear radiation with empty words like "there is a low possibility that a massive amount of radiation has been leaked" or there was a "low possibility of radioactive contamination" that would be harmful to health -- is no longer ruling out that possibility. Instead of speaking of "micro sievert," he is suddenly speaking of "milli sievert," as he reads the cheat sheet provided by his staff. Lay people may have trouble differentiating between the two, but Japanese television explained it a short time later to viewers: A milli sievert is a thousand times stronger -- already at a dosage of 100, a milli-sievert is enough to make a male radiation victim sterile.

Despite the new openness, the Japanese people are still waiting in vain for reliable information about the possibility of a meltdown and useful instructions on what they can do to protect themselves. What, for example, are the 30 million people living in the Tokyo metropolitan area supposed to do if Edano in the near future announces even higher radiation rates?

The cabinet secretary is visibly making an effort to avoid panic. Instead he prefers to rely on truisms like this: "The further away you move the lower the radiation levels will become."

Fear is mounting amongst the Japanese and their trust in Tokyo's announcements is dissipating quickly. The numerous panels of experts being interviewed on Japanese television are also expressing their bewilderment at the paucity of information coming from the government and Tepco. "Why aren't they giving us clear information?" they ask. "This is really getting irritating." By now you can hear commentary like that on all the channels. What the world is currently experiencing is the typical Japanese habit of trying sweep accidents under the carpet -- out of shame and a false sense of group loyalty or corporate spirit. By now, though, everyone knows about the accident.

"The nail that sticks out gets hammered down," is not just a Japanese proverb, it is also a rule of behavior the country's children learn at a very young age. This time, too, no one in power in Tokyo has had the confidence to tell the entire truth. That is also true of Japanese institutions, which are confusing the people in the same way as the office of the prime minister. These include the nuclear regulatory authority, Nisa. One can recognize Nisa authorities by the neat white uniforms with blue stripes they wear (the prime minister and spokesman Edano, for their part, wear blue overalls, and Tepco managers can be recognized by their suits and ties).

Nisa was first established 10 years ago -- not a very long time for a country that has been using nuclear power since the 1950s and currently produces more than one-third of its electricity using nuclear power. Even so, they still had enough time to address safety concerns at the fully outmoded Fukushima plant, built in 1971 -- or even to take it offline.

They could, at the very least, be forthcoming in warning the Japanese about a situation that is growing ever graver. Instead, Nisa officials have resembled bored parking lot attendants during their press conferences. "As the chief cabinet secretary just announced," is one of their favorite sentences -- or: "You'll have to ask Tepco."

Tepco Takes Its Time, But Japan Doesn't Have any More

Fukushima has become a tragic mix of questionable competence and deliberate deception. The response of Tepco, too, has been problematic. The listed electricity company is not used to having to explain anything to consumers. It was only on Sunday that Tepco chief Masataka Shimizu gave his first press conference -- two days after a "nuclear emergency" had been declared at Fukushima and several hours after the explosion in reactor bloc 1.

Shimizu said the scope of nuclear radiation was under review, but that he didn't think it would have "immediate" consequences for human health.

If not immediate, though, then when? Tepco likes to take its time, but Japan may not have much left. Prime Minister Kan and his crisis team also reportedly first learned of the explosion in reactor bloc 1 after seeing it on television. According to the reports, Tepco apparently didn't think it necessary to immediately inform Kan. Worse yet, chief cabinet secretary Edano has been quoted in the local press as saying: "The information that the office of the prime minister obtained from Tepco was not correct."

Tokyo is losing its patience and officials have begun casting blame at each other. But Kan and Edano too have been criticized. The prime minister first addressed his people on Saturday evening, 30 hours after the terrible earthquake shook Tokyo and the northern half of Japan's main island. The prime minister uttered a few stately sentences, but he didn't have much to say about the nuclear catastrophe. Instead he referred questions to spokesman Edano and disappeared.

But fears are mounting, and Kan himself appears to have now recognized that fact. And his next public address may be much, much grimmer than his last. 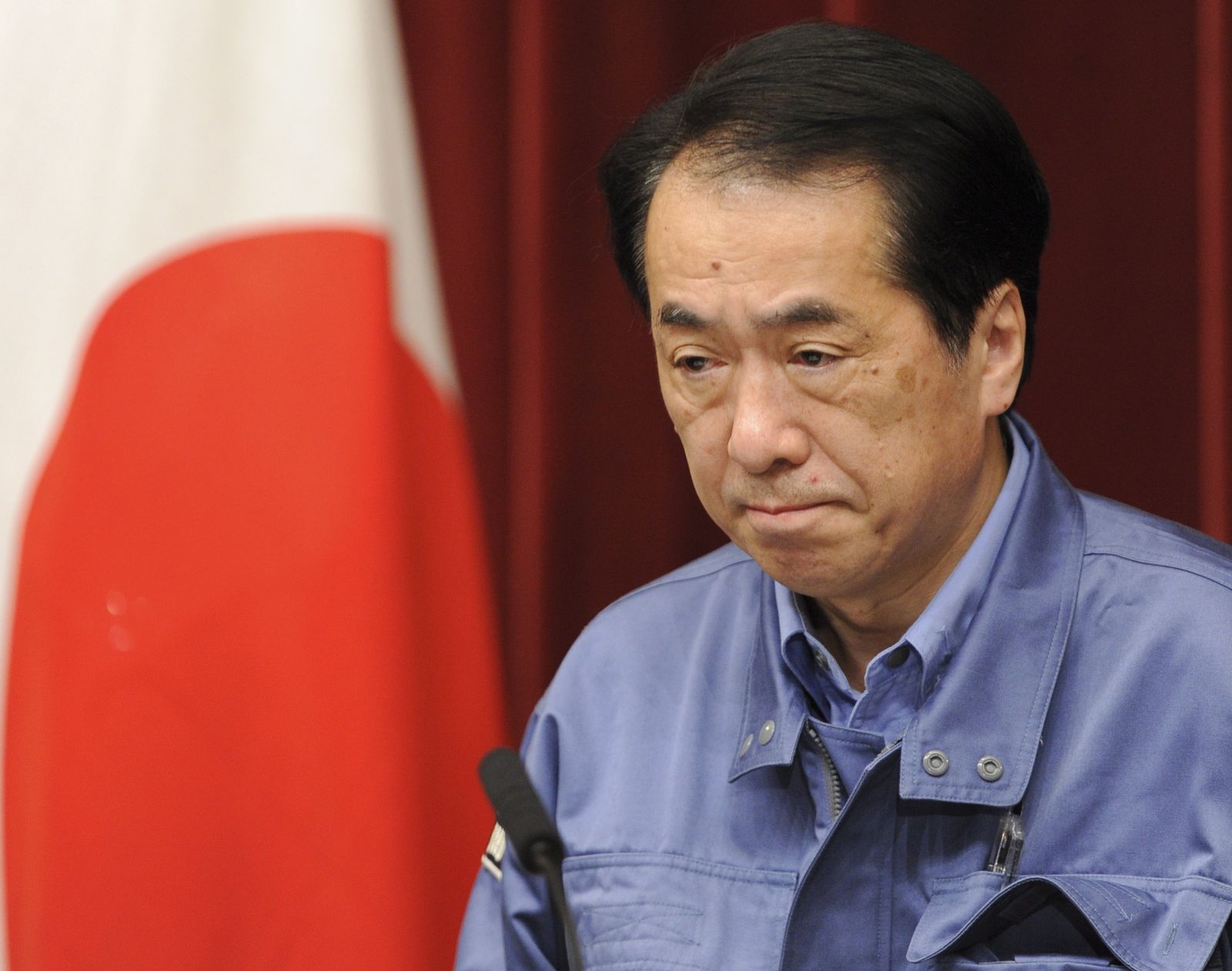 Japanese Prime Minister Kan Naoto: The nail that sticks out gets hammered down