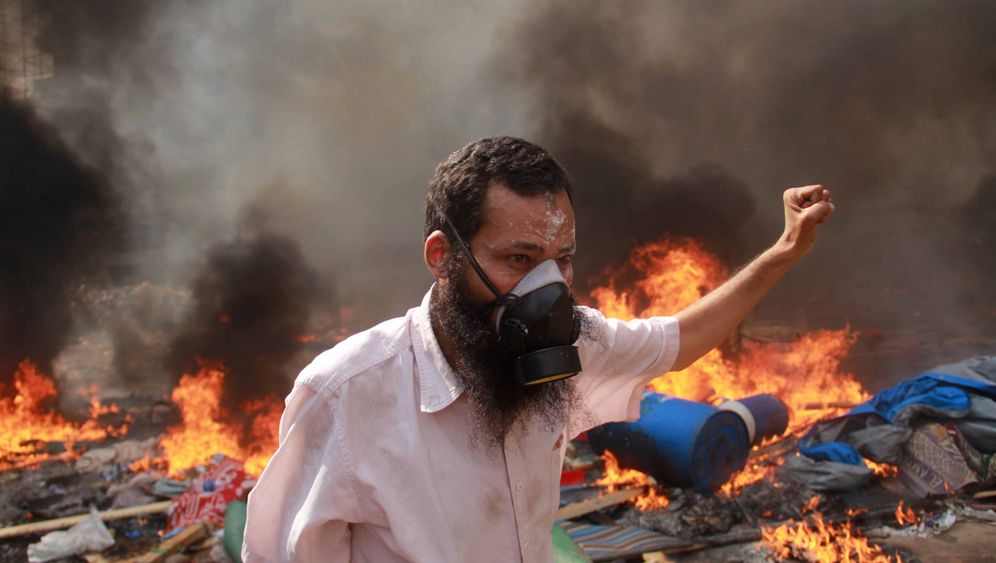 The events outside the safety of his high-windowed office are unfolding rapidly. Helicopters have been shot down in Sinai. Islamist terrorists have killed a senior government official outside of his home. There are car bombings, police raids and arrests.

Just pulling out a camera downtown can be enough to get arrested -- or be cursed and beaten by a hysterical mob thinking they had found a spy. Security at major hotels has been expanded to the point that they look like fortresses. Three years after the revolution, anger, frustration and fear reign in Egypt.

Mohammed el-Mahdi, a slender, short and respectably dressed man, sits behind his polished desk. His office is as big as a ballroom and is packed with golden chairs, Louis XVI tables and crème colored Fauteuils. He wears gold cuff links and a dark blue blazer that he doesn't unbutton even when he sits. He's 77 years old and works every day for 10 to 11 hours. No wonder he looks a little tired.

El-Mahdi is Egypt's minister for reconciliation. Earlier, he served as a justice on Egypt's Supreme Constitutional Court. He was also a judge at the International Criminal Court in The Hague for four years and had a stint as a legal advisor at the United Nations in Geneva. His job today is to bring peace to Egypt, a country still teetering on the brink.

The world doesn't have many government officials with El-Mahdi's job title, but a reconciliation minister is a position Egypt truly does need. As an equitable man with a liberal face to the world, he's invaluable to the government in Cairo. He knows it, too. If he thinks the government is using him, he doesn't let on. After all, he also has his own causes and goals. He wants to bring various conflicting -- and often hate-filled -- segments of society back together and to reconcile generations that have become divided.

He says he hopes Egypt will one day be able to have the kind of hospitable climate for debate and discussion one sees in France, Switzerland or Britain rather that the bitter fighting and squabbling seen in his country today. He has a plan to make this happen.

The clamor outside is clearly audible from inside his office. In front of the government building where his ministry is located, work is underway to increase the height of the surrounding fence to six meters (19 feet) and add barbed wire on top. The 10-story concrete block, located just off Tahrir Square, is guarded by hundreds of watchmen. El-Mahdi's own ministry is located on the first two floors. With some 86 people working for him, his is a relatively small ministry by Egyptian standards. "All I need are a few handpicked staffers," El-Mahdi says.

He also explains how he got the job. "Adly Mansour called me," he says. "He's an old friend of mine. He had just become president and wanted me to be a part of his cabinet. I agreed, but stipulated one condition: That the word 'reconciliation' be part of my title -- as a message."

El-Mahdi says that reconciliation is a process that has to be initiated by both sides. Domestic reconciliation has to be the focus, but there's also an international element when it comes to Egypt's role in the world.

"Here are a few of the things I am dealing with right now," he says. "Foreign investors are complaining that the government isn't holding to its agreements, and that this has caused them to lose a lot of money." Some 15 such cases, he says, are currently the subject of legal proceedings, mostly at the International Center for Settlement of Investment Disputes in Washington. "In total, we're talking about $80 billion," he adds. The file for each case is this high, he says, raising his hand about a meter above the floor. "If the impression is established that you shouldn't invest here, then money will start flowing out of the country, costing us jobs and causing poverty and desperation." So he's working through the tangled mess, struggling to deal with each contract, clause and amendment as he seeks to calm vexed investors.

"Another issue are the complaints and concerned queries" from abroad, he says. The European Union, for example, just sent a delegation of a half-dozen people to Egypt. El-Mahdi is responsible for attending to them. They will likely politely remind the Egyptian government not to lock so many people up in jail.

When he gets a spare moment, he replies to letters from the United Nations Commission on Human Rights or grapples with issues raised by groups like the Committee to Protect Journalists. He receives people in his office for meetings, he shows them around and explains the situation. It wouldn't be off the mark to call him Cairo's chief consoler. The Egyptian government has tapped him because his English and French are excellent, because he is an excellent ambassador for his country and because he has an international background, having gone to college in Paris and lived in Geneva.

But what's his real agenda? Is it even possible to order societal reconciliation in the same way a doctor provides a prescription? "No it isn't," Mahdi says, "but it is possible to find improved conditions for solving conflicts. One prerequisite are rules that apply to all and are also adhered to. Without them a society will crumble. We're working on it. And at some point in five or 10 years they will prevail."

Egypt isn't a lawless nation. Sharia provides an important legal foundation while the legislative and judicial systems are based on the Napoleonic Code. Still, there's a real problem in Egypt; laws are routinely ignored or bent in everyday life. If rules had been followed, then a person like former President Hosni Mubarak never would have been able to amass a personal fortune of several billion euros. But the Egyptians put up with this.

A Man Who Believes in Rules

This is where El-Mahdi differs from the vast majority of his compatriots. He's a man who believes in rules.

He learned their importance early on as the scion of an upper class family. His father was a senator and his great-grandfather a sheik at Al-Azhar University.

Mahdi's father, the family's only son, died young. Egypt soon got swept into the maelstrom of revolution. After King Farouk was toppled in 1952, Gamal Abdel Nasser came to power. They were chaotic times and Mahdi's family was threatened with the prospect of poverty.

Mahdi says he studied at a brisk pace, that he worked harder and was more eager to learn than his fellow students at college. He got a degree from the Sorbonne in Paris, returned to Egypt and became the youngest justice at Egypt's Supreme Constitutional Court. He became a part of the system and the apparatus, as he remains today.

Given such a past, is it even possible for him to do justice to his new role? "Yes, it is true that I am a part of the system and not some 30-year-old activist who spray paints slogans on the wall," he says. "But at this phase of upheaval, I feel that it is only in this function that I can achieve anything."

Egypt is currently going through a time of restoration of sorts. Three years ago, when the revolution broke out, many in the older generation of power disappeared from public view -- the business elite, members of the military and police. The year of the Muslim Brotherhood followed, and the widespread dissatisfaction in the country turned into hate. Now the former power elite are returning -- and they are trying to endear themselves to the public.

The first act of their return to power was to intimidate or muzzle opponents, adversaries and journalists. Some of the heroes of the revolution are sitting in jail today, serving draconian sentences. Then they curtailed the right to demonstrate. In the future, it will also be possible for civilians to be tried by military courts.

Finally, General Abdel-Fattah el-Sisi was named head of the Egyptian military and then proclaimed a candidate for president. Three years after the popular revolution, an ex-general will once again lead the country. Holger Albrecht, an assistant professor of Comparative Politics and Politics of the Middle East and North Africa at the American University in Cairo, has written that the military, the founding institution of modern Egypt, views itself as the country's guardian. But also as the guardian of its own interests. It has been estimated that the generals' economic empire, widely referred to as "Military Inc.," is responsible for up to 40 percent of gross domestic product. For the most part, the military has stayed away from daily politics, but that could now change.

There aren't many liberals left in Egypt who are willing to openly criticize the return of the military and the societal reform that is underway. One who still does is novelist Masura Eseddin. She sits in a café in downtown Cairo and describes what she calls the new "symptoms of madness."

"A few weeks ago a puppet was accused, a puppet from an ad campaign for Vodafone, Abla Fahita, a button-eyed silly thing that could have been straight out of the 'Muppet Show,'" she says. "They accused Abla of sending coded messages to terrorists on television. Can you imagine? Have we all gone completely insane?"

'There's No Sense of Togetherness Anymore'

Eseddin joined the protesters on Tahrir Square three years ago. "I fought along with them for our dignity, for freedom," she says. She's written a number of novels and a few have been translated into several languages. She's smart, amiable and lives a normal middle class life. And yet these days she feels uncertain when she expresses herself, fearing she is being followed and that she might be in danger.

"The worst thing, though, is how society is disintegrating. There's no sense of togetherness anymore," she says.

It's a view shared by Reconciliation Minister El-Mahdi, who is working to counter those developments. Each day his office receives around 200 faxes. He says virtually all of them are complaints against police, soldiers, evidence or accusations. "We follow up on every single one," he says. "We sort evidence, write reports, dig deeper. We speak with all sectors of society. We insist on people following the rules."

And so he sits at his desk in his office. This is his way of repairing and reconciling society. Perhaps it's even his own form of revolution.