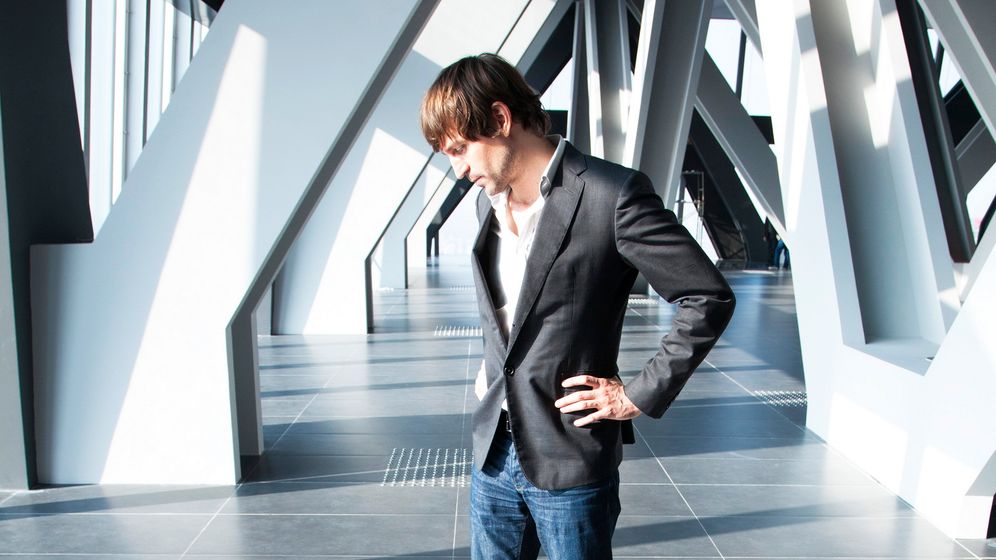 Ole Scheeren is the man who makes the impossible possible in architecture. He is a man who turns structural calculations into magic, who can seemingly make skyscrapers disappear into thin air and who created a movie theater that floats in the Indian Ocean. His wave of success has already carried him far. And when he has his way, this will only be the beginning.

But now, on a scorching Saturday afternoon in Beijing, he is experiencing a small, curious moment of failure. Ironically, it's happening in front of his most famous building.

A construction fence surrounds Chinese state television CCTV's new headquarters. The gate is open and everything seems a little deserted. But the minute Scheeren steps onto the site, a few men appear, some uniformed and some in civilian clothes. They probably think he's a tourist. They don't ask him what he wants, but simply block his way. Scheeren turns around and leaves.

He laughs. It's what he expected. He has already said that it is "currently almost impossible to get into this building," even for him and even going through official channels.

The building looms in the background. It consists of two angled towers, connected to each at the top and bottom with L-shaped elements. Scheeren calls the shape a "loop," a symbol of cooperation. The CCTV Tower is the world's largest media building, and it contains more expensive technology than any other structure.

From the outside, it seems finished. In fact, it's looked that way for the last three or four years, but the building is only now being put into use. Some 14,000 CCTV employees are gradually moving from the old communist utilitarian structure a few kilometers away to the new avant-garde headquarters. At the moment, it seems as if each additional person is one person too many. But it's astonishing that this also seems to apply to Scheeren.

It's as if the Chinese builders had forgotten their architect as soon as he done what was required of him, as if to say that he is, after all, merely a foreigner who doesn't belong. But Scheeren isn't the type of person to feel unsettled by this treatment. The CCTV building is the monument to his greatest achievement. He also happens to see it every day, both as he walks to work and from his office window. The last time he was inside the building was a few months ago.

The German architect co-designed the building with Rotterdam-based star architect Rem Koolhaas and his firm Office for Metropolitan Architecture (OMA). Although the design was a team effort, Scheeren says that his part was "pretty substantial." OMA won the design competition for the project 10 years ago. Scheeren was in his early thirties when he moved to Beijing. He saw Asia as a place filled with opportunity and faith in the future, compared to what he perceived as a state of torpor in the West.

Scheeren was adept at capitalizing on his own youthful and cool persona, and his role as one of the pop stars of architecture. Until recently, he was in a relationship with China's most famous actress, Maggie Cheung, who is well known internationally for her roles in films such as "In the Mood for Love." At her side, he was able to experience life on the red carpet, while the rest of the world marveled at how glamorous the life of an architect in Beijing could be.

He opened his own firm two years ago, when he became the principal of Büro Ole Scheeren. The atmosphere at the firm is not unlike that of a typical architecture office in Berlin or London, complete with gray concrete floors, white walls and young people sitting in front of computers. On the previous evening, Scheeren had held a party for his 50 employees. It was an event designed to prepare them for the future. He told them that architecture always means hard work, but it sounded more like a promise than a threat.

Despite his past achievements, the most important stage of his career has only just begun. He is already famous, but it isn't enough for Scheeren. He wants to prove that he can do more than high-profile government and investor-funded buildings in Asia. "This is still the place where questions about the future are being asked," he says, and yet being active in Europe also appeals to him.

When a sensational skyscraper goes up in Thailand, architecture critics still have a tendency to ignore it. Scheeren wants to open an office in London as soon as possible. The city is the home of many top architects like Zaha Hadid, David Chipperfield and Norman Foster. They are all part of a different generation, but Scheeren, born in 1971, has already surpassed everyone in his own age group.

He is now working on high-rise projects from Singapore to Bangkok, as well as artist studios that resemble surrealistic art. He would like to build a museum as his next project. He says that the psychology of social cohesion is very important to him.

He is likely to go far with his approach to architecture. Many of his designs are surprising, experimental and yet buildable, created for specific locations and yet universal in their essence.

One such project is the skyscraper he has been commissioned to build in Kuala Lumpur, next to the Petrona Towers, which are world famous for their height and grandiosity. His tower isn't as tall, but it is no less noticeable. At the beginning of the design phase, Scheeren drew a classic high-rise building. But then, in subsequent sketches, he divided it into five pieces and rearranged them in an unexpected way. The result, once again, is a sculpture of sorts, but one that seems almost purist by Asia's current standards.

The greenness of the tropics and the vitality of the city will penetrate into the base section, where he is rearranging the traditional organization of floors. The floors for parking garages, restaurants and shops are interspersed, and deep inside this organized chaos are surprisingly modern and unusual prayer rooms for Muslim visitors. The skyscraper is meant to be a symbol of the multilayered society in a city that is home to Malays, Chinese, Europeans and guest workers from around the world.

Some of the things he is working on he began as an employee of Koolhaas. The Interlace, a residential project in Singapore, is one of them. The investor had requested a group of high-rise apartment buildings and will now get an interlaced landscape of six-story residential structures with landscaped roofs and many additional outdoor spaces. When complete, the Interlace will be a huge development with more than 1,000 apartments, a dense urban environment that doesn't feel constrained, but rather airy and, most of all, livable.

He is increasingly succeeding at what he was unable to achieve with the CCTV building in Beijing, and what was probably not the goal there: to take the architecture of the unapproachable and de-monumentalize it. Although the CCTV headquarters is an alternative to the classic skyscraper, it is still a colossus.

Achieving a spectacular impact is always important to him. In the spring, Scheeren had a floating movie theater, a raft of sorts, anchored in the waters off a Thai island, in breathtaking natural surroundings. At the end of August, he had it shipped to the architecture biennale in Venice, where it was set up in an old harbor. One of the films that will be shown there is a documentary about Scheeren and his career. It's his way of letting Europe know that he's back.

He is a visionary and a master of sensational details. Most of all, Scheeren designs with passion, which isn't necessarily a given among architects. Even his former boss and mentor, Rem Koolhaas, was long more comfortable in the role of manifesto writer.

The Importance of Patience

Scheeren, the son of an architect, grew up in the southwestern German city of Karlsruhe. When he was 18, his father allowed him to represent him on construction sites for weeks at a time, which he enjoyed. But he soon dreamed of working for Koolhaas, the guru of nonconformists. He has since emancipated himself from his father figures. Koolhaas is an intellectual figure, says Scheeren, who sees himself as someone who "creates reality."

A few years ago, he had a group of architecture students build thousands of paper figures, which he then had placed in front of the model of the CCTV building. He wanted to be able to imagine the large numbers of people the building was supposed to accommodate. Now the paper figures are coming alive, and he isn't part of it.

In Asia, the place where everything has had to be done very quickly in recent years, Scheeren has had to exercise patience. Many expected that the Chinese would want to inaugurate their prestigious new building by the 2008 Beijing Olympics, but the elaborate interior wasn't finished. It was scheduled to be completed by 2009.

In early 2009, there was a fire in a neighboring tower that was part of the complex. CCTV took responsibility for the blaze, blaming it on a fireworks display ordered by senior employees. A firefighter died in the fire. The station apologized and the government felt humiliated. That too was probably one of the reasons why the move to the new building is being carried out in such a discreet manner.

He sees the West as biased and one-sided, and he speaks of hope for change. "If I didn't have it, I wouldn't be here," he says. But he also says that the power of the architect is overestimated. "The building isn't responsible for the way this country develops."

Is this sort of thinking permissible? Society is an important word for him, and so is responsibility, but the regime in China isn't his favorite subject. He is determined not to be compared with the architects who live and work in Europe and complete their projects in Beijing and Shanghai from there, essentially exporting their architecture. "I live here," he says. "That's the difference. I've become involved with Asia." Perhaps his life will not always be in Beijing, he says, "but it'll also never be without it."

He talks about something that he calls typical "European sentimentality." It seems to amuse him now, after so many years in China. He comes across as someone who has cast off that sentimentality.

On this exhaustingly hot Saturday in August, Scheeren visits one other construction site. This one is close to the National Art Museum. An excavator is in the process of tearing down old buildings. An auction house has hired Scheeren to build a new structure on the site.

He has hardly set foot on the site before a man comes up to him. The man is friendly and smiling, and he asks whether Scheeren would like to buy the plot. It's either a joke or an attempt to sell something that isn't for sale.

Scheeren stops the man with a wave of his hand. He doesn't speak Chinese, but there is one thing he can say perfectly and without an accent: "I am the architect." It sounds proud, and even a little European and sentimental.